One of the most common questions we get asked when someone is first learning about Managed Futures is whether Managed Futures and High Frequency trading are one in the same. To that, we say: not in the slightest.

HFT and systematic trend-following CTAs both use computer algorithms, but that’s where the similarities end. HFT programs typically issue thousands of orders per second, and frequently hold positions for only a few seconds. Their objective is to profit off of small variations in price – earning a tiny profit on each trade, multiplied over thousands or tens of thousands of trades per day. These HFT programs are usually competing against each other to make these trades as quickly as possible – leading to a virtual arms race of faster computers and connections to the markets.

But for managed futures, algorithms are used in a very different way. Systematic trend following CTAs employ algorithms to help determine their entry and exit points into a trade.  This kind of algorithmic trading isn’t the “10,000 canceled orders per second” variety of HFT. Trend followers are hoping to ride big outlier moves, holding their trades for days or weeks at a time. Algorithms in the world of systematic trend followers are simply the mathematical, pattern-recognizing tools that CTAs use to identify potentially profitable trades. But there are hundreds of programs out there, all with different techniques and holding periods. Trades can last days, weeks, and even months! So what is the average holding period for the everyday Managed Futures strategy?

It just so happens the AIMA research paper we’ve been highlighting recently (here and here) has just the chart. Societe Generale created their own trend indicator which tracks their own index which follows Trend Followers in the CTA space:

The Societe Generale Trend Indicator in figure is a hypothetical market based portfolio designed to produce a high correlation to trend following managed futures strategies. Since its inception in 2000, it has recorded a correlation to the SG Trend Index of more than 0.7. The trend Indicator is built on a bottom up basis and therefore allows analysis of trend following returns by attributing them to indicative market positions.

Based on that – Soc Gen says the average holding day is 90 days – or three months:

By studying how long managed futures strategies hold their trading positions for, we can determine whether or not they are high frequency in their nature. Figure (11) below shows the average holding period for the Societe Generale Trend Indicator. As we can observe, on average a typical trend following CTA holds the same position on a single futures contract for on average of approximately 90 days. Whilst there are fluctuations in the average holding period of CTA portfolios, as they are rebalanced over time, they cannot be considered high frequency. 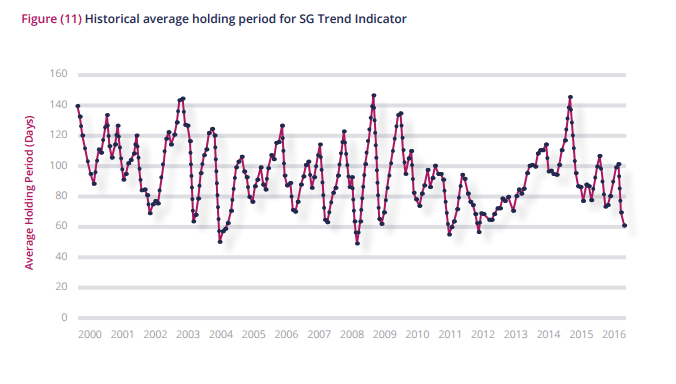 It is interesting to note that it seems like the average holding period has been slowly declining over the years, with CTAs having an average holding period right around 60 in 2016– the lowest in its range (see chart above). It will be interesting to see if this will develop into a trend, where trend following strategies doesn’t stay in trades as long, or whether we will see a spike in holding periods like in 2008 and 2014 (both years of heavy crude oil moves) (disclaimer: Past performance is not necessarily indicative of future results).

Finally, all of this is to say that the SG Trend Indicator follows specifically trend following CTAs, and not all the different categories and sub-categories. But even the short-term traders that we work with have a trading range of 0-5 days, but High-Frequency traders could be trading hundreds of thousands of times in one day.