What can Managed Futures expect from ‘The Great Rotation’?

When the markets don’t react in the way you think they should, it’s a harsh reminder of the rule that past performance is not necessarily indicative of future results.

For the last five years, the street has been littered with failed trades trying to correctly pick the exact moment the multiple decade bond rally is going to come to an end. And now investors and managers alike are gearing up for what they think is another call of the reversal – where interest rates will finally rise from their historically low levels – what the Wall Street Journal is calling “The Great Rotation.”

And as often happens, by the time people start writing about it, the move might already be under way – as seen in this quick look at 30-year bonds fall from their all-time highs. 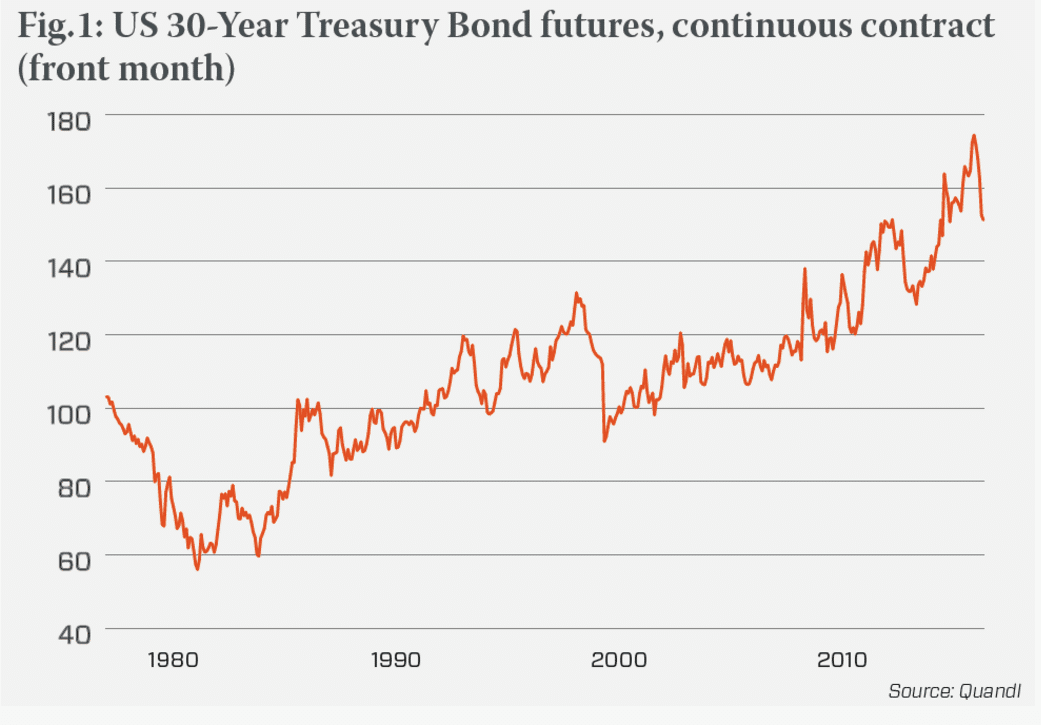 The US 30-Year Bond has dropped 15% from its highs while the less volatile 10-Year has fallen -6%. At first glance, these kinds of down moves might appear to be just what managed futures managers have been looking for, especially if it lasts 30 years.The question is, will the reverse trend of increasing rates and falling bond prices produce the same return as the 30-year up trend in the bonds? It turns our there’s two separate camps on this.

The first is the generally accepted view that managed futures is a long/short strategy, and is just as profitable and capable of capturing big down trends in bonds (rates up) as it was in capturing the big up trend in bonds (rates down). This makes sense from a theoretical standpoint, and is intuitively correct. Managed futures models don’t much care which way a trend moves, they just want to be involved in capturing it.

The second, more nuanced view, however, is that bonds’ price structure might look much different on the way down (rates up).We turn to Roy Niederhoffer for this view, who argues that a downtrend in bonds/rise in yields would not be as profitable as the previous bond rally because of the negative carry associated with the trade. Niederhoffer displays this modelling, showing that roughly two thirds of the return trend-followers extracted from bond markets was due to the roll yield – the difference in contract prices from one month to the next. 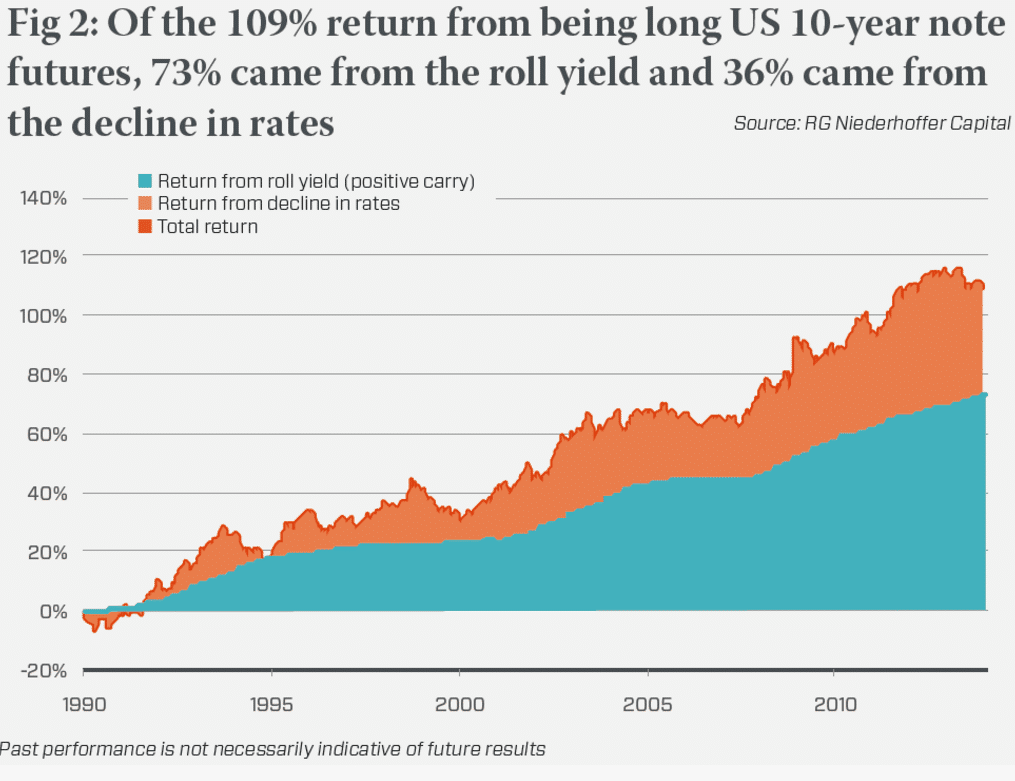 Niederhoffer goes on to show that if bonds remain in backwardation while interest rates go up – managed futures managers could lose that roll yield and achieve nothing like the returns seen on the up trend:

“In Figure 3, the red line shows the return on a hypothetical sell-and hold position in the US 10-Year note futures contract (the return is positive because the price has dropped).

This short position yields a return of 36% from the rise in interest rates.

The return from the negative roll yield, shown in green, is -73%.

Obviously this vastly exceeds the 36% profit from being correct on the direction of interest rates.

The blue line in Figure 3 shows the total return of a sell-and-hold strategy.

Obviously, the -36% total return is not particularly attractive.” 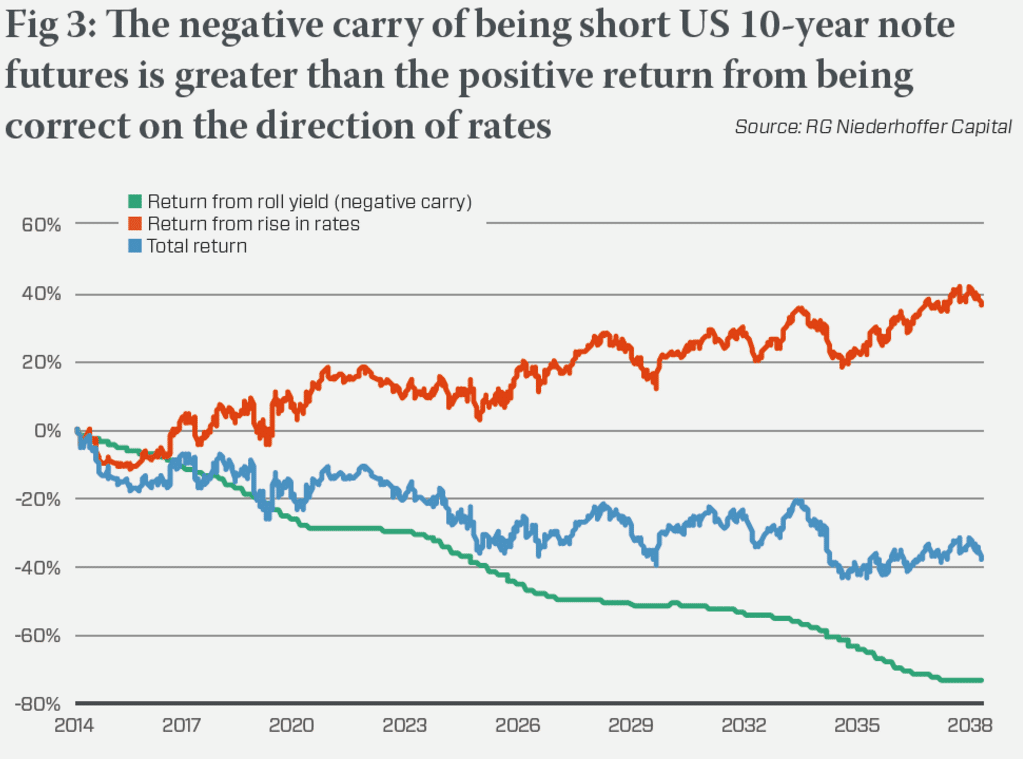 The bottom line, says Niederhoffer, is: “An investor shorting fixed income futures in a rising rate environment will face a headwind of -6% per year compared with an investor being long the same futures markets in a declining rate period, all else being equal.”

That last part is the million dollar input, of course. Will “all else be equal” stand true?

It’s not too hard to imagine that the shape of the price curve will change along with the direction of the trend, moving to a point where eventually traders may be thinking future rates will be lower than the rising rates we’re going into, thereby switching that roll cost on short trades to a roll yield.

There are also ways trend-followers can mitigate the roll cost if bonds remain in backwardation – selling further out contract months to gain their exposure to the down trend, and so forth; but this bears watching across the yield curve not just in the US, but in international interest rate markets as well.

If we see that the down trend isn’t as profitable as the up trend was – there’s a whole lot of money in large managers skewed towards just these markets that isn’t going to like the return profile they’ve suddenly found themselves with. Stay tuned.