Infographic: The Highs and Lows of IPOs

It might surprise you to hear that despite the amount of effort that is going into covering new IPO’s like SNAP, fewer and fewer companies are doing it. In 1996 (rise of the dot com bubble), there were 706 initial public offerings; in 2016, there were only 105. A simple explanation of this could easily be that there were companies during that time that had no business going public, and the current numbers are inside the bell curve of normal.

One of the hyper focused IPO’s of 2017 happened to be the social media platform millennials love, and boomers and Gen X-ers are scratching their heads at. SnapChat $SNAP. So far it’s had a rocky start as they look to answer the question every social media company tries to answer: “How do we make money off of this?” Their answer is advertising, but if you take a look over in twitterland, they haven’t quite figured out how to monetize a medium that is used by the highest office in the land to address the nation. Baffling, right?

But IPO’s aren’t just for social media moguls. Telsa $TSLA is hitting new all-time highs, blowing other car companies stock prices out of the water. Amazon looks unstoppable (up 18% thus far in 2017), with reports that their poised to become a Trillion-dollar company, and the aforementioned Twitter all abuzz about how much they’ve grown since their IPO.

Let’s not forget about the IPO that isn’t getting the credit and attention it deserves, Dominos Pizza. They went public back in 2004 (along with Google), and Domino’s is now outpacing Google (Alphabet) in terms of stock price gains with +2,400% compared to +1,555%)! Who would have thought a staid old pizza company would provide a higher return than the king of the internet? There’s a joke in there somewhere.

But for every one of these success stories in IPO-land, there’s just as many tales of overpriced IPOs and unsuccessful enterprises like the infamous Pets.com or more recent examples like GoPro or Zynga.  The truth of the matter is that IPOs are a bit of a crap shoot. There’s no telling how the stock price is eventually going to turn out. If you had the wits about you to invest in Google or Amazon in the early days, you’re investing ego is probably as large as the size of those companies. If you tried your hand at some of the less fortunate companies like Twitter or eToys, you probably learned a lesson earlier than later about individual stock picking.

Which reminded us, we hadn’t done an infographic in a while; what better medium to check out the highs and lows of America’s favorite (investing) pastime – the IPO.  We redid the graphic originally found on StockTwits, adding some recent names, and some internet bubble burnouts, to give investors a little better picture of what going with a stock looks like. Check it out here…

(P.S. — If you would like to republish this, please find the embed code at the bottom of the post). 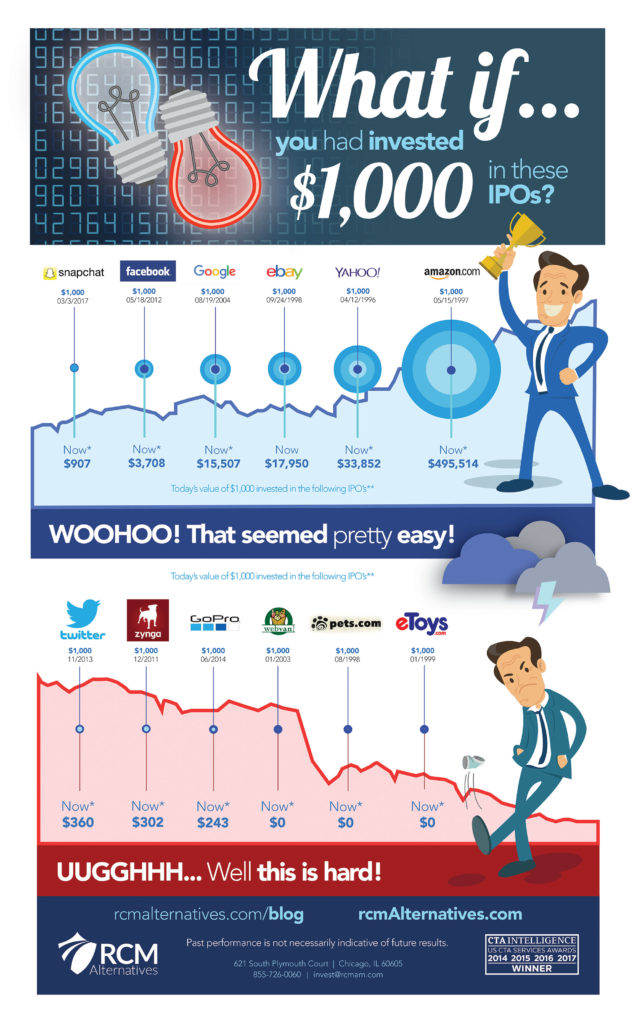 Infographic: The Highs and Lows of IPOs – An infographic by the team at Investing in IPOs

Embed Infographic: The Highs and Lows of IPOs on Your Site: Copy and Paste the Code Below