For as long as anyone can remember, the classic hedge fund fee structure has been two and twenty. Or more formally, a 2% annual management fee and a 20% performance fee. The management fee is to allow for the manager to operate their business, invest in technology, and pay their quants. The performance fee is to incent them to make the investor a lot of money, as the more money they make the investor, the more money the fund manager makes.

This was long thought of as a nice alignment of interests, until you could own the entire S&P 500 for 9bps in an ETF. The proliferation of passive index tracking ETFs at expense ratios next to nothing has certainly put pressure on hedge fund fees. Why, exactly, is the state of Rhode Island, for example, paying hedge fund managers more in fees than they earn on the assets those managers are investing for them:

In the last three years, Rhode Island has paid more in fees to its hedge funds than they have produced in investment returns, according to the treasury.

“There is something that is broken here in the fee structure,” Magaziner said.

This is just one of the chorus of voices saying hedge fund fees are too high, with some even saying the classic 2&20 structure results in the manager retaining more of the profits than the investor putting up the assets.

But it shouldn’t really be front page news that at least 20% of the gains are eaten up by fees. That is the model, and that is what you sign up for. And let’s talk about time frame here for a second, and the skewed perception that can come from looking at the percentage of fees earned by the manager during periods of poor performance versus times with good performance. A simple excel exercise will show you that a net return of about 3% (gross of 6%) is the break-even point between more money going to the manager or client under a “2&20” fee structure. At a 1% net return, it’s 70% of the return to the manager, and only 30% to the customer. At a 15% net, those numbers are flipped – with 70% going to the customer. 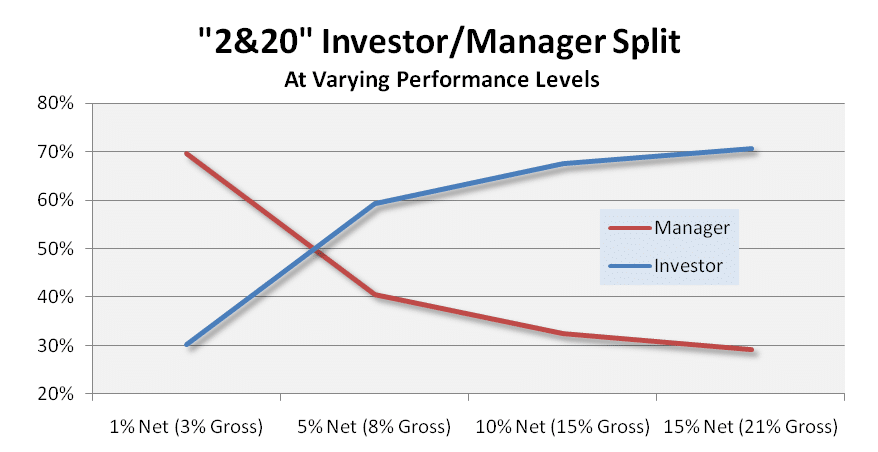 But regardless of how many excel exercises you run, there’s still an air of distrust/dislike when it comes to hedge fund fees, especially when you have firms like AQR offering hedge fund strategies in a mutual fund wrapper for just 1.25% a year (with no performance fee!)

Investors have called for change, and we’re seeing not just fees coming down, but also the evolution of the very concept of management AND incentive fees:

“…with managers exploring new and nontraditional fee arrangements [some] fees are falling, with the average hedge fund management fee dropping to 1.3 percent, according to AIMA’s findings.”

“2&20 is no longer the only game in town,” said Michelle Noyes, head of Americas for AIMA, in an interview. “It used to be a joke that a hedge fund is a fee structure. But now there is a tremendous amount of nuance in fee structures. There are a lot more levers that can be pulled to fine tune the fee equation.”

Take a look at the differences in hedge fund fees over the past 12 years. 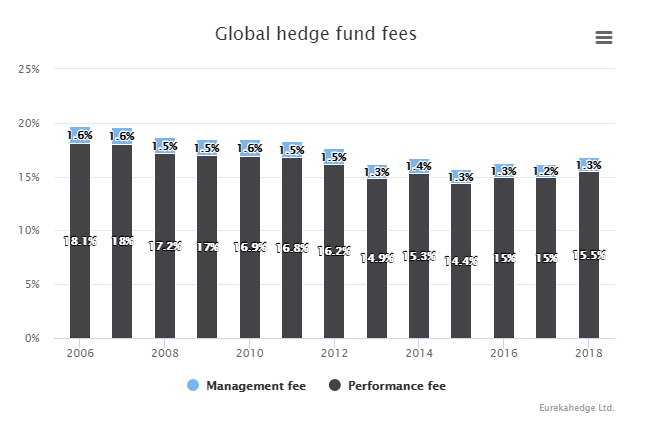 The 1-or-30 fee structure:
A new structure reportedly created and implemented by Albourne Partners and the Teacher Retirement System of Texas, is the 1 OR 30 model:

This structure has been referred to as “1-or-30” because it will always pay a 1% management fee, which the manager trades in for a 30% (of alpha) performance fee when the latter is greater. The only exception to this is when an investor is catching up to its 70% share of alpha, following periods when the 1% management fee exceeded its 30% share of alpha. (Fiduciary Investors).

The ‘or’ component is the main differentiator here. The investors are meeting managers half way, saying – ‘hey, we understand you need to run your business, and we’ll compensate you 1% a year to do so’. But you also don’t need that 1% when have had a great year and are earning a big incentive fee check.’

The 1 or 30 aligns incentives just as the 2&20 model does, but also protects the investor in the case of there being small single digit returns where the manager’s share of the profit when combined with the management fee would be 50% to 75%. Here’s Albourne doing their own excel work showing the investor percentage of profits retained in the different fee scenarios. 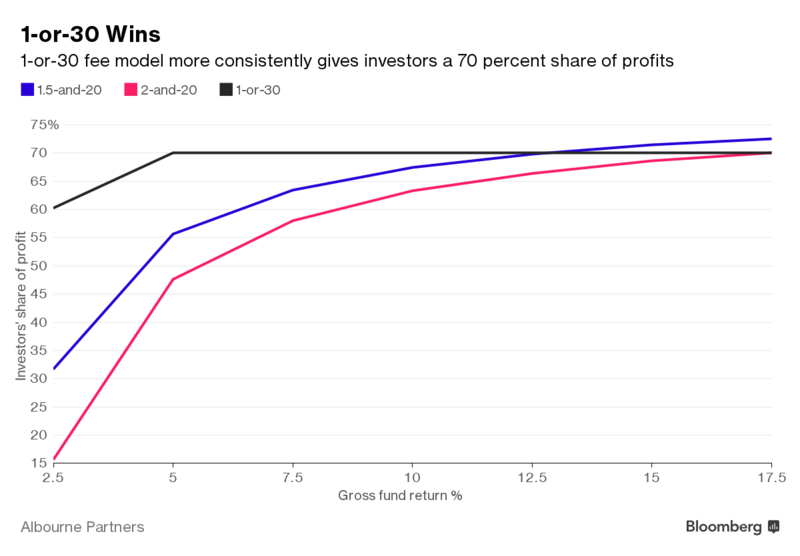 Of course, if you’re able to churn out profits year after year at a pace much better than your peers; none of this matters all that much. The best performers and niche, capacity constrained strategies are still able to command higher fees, as witnessed this year by DE Shaw increasing its fees to 3 and 30 and Element Capital moving from an already high 2.5 & 25 to 2 & 40!!