Move over Bitcoin – $TSLA is here

Maybe you’re one of those passive investors who doesn’t follow individual names… Maybe you’ve been stuck on an island talking to a volleyball. Whatever your reason – if you haven’t seen the price action in Tesla $TSLA shares this year – you’re missing one heck of a show. It’s like 400 million people in China have the Coronavirus and the only cure is to buy a Tesla. Here’s what Elon Musk has been looking at on his phone (likely second by second). 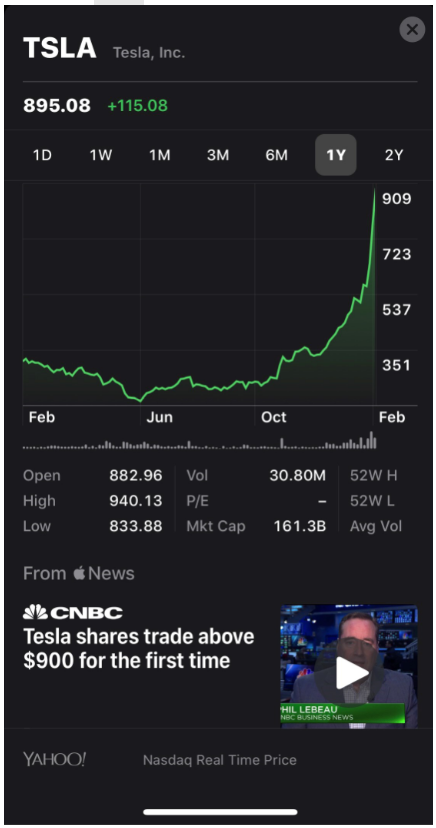 Now, this has all the makings of a short squeeze, with CNBC and the like are all over that story, with headlines like the following, reminding us once and for all of the old market axiom that you’ll run out of money before the market returns to sanity…

Tesla short sellers are down $8 billion in 2020, including $2.5 billion alone from Monday’s pop

But we can’t help but look at it from the analytical, due diligence, hedge fund investor lens. Here’s what TSLA would have looked like to an investor before October of last year, and since October of last year (a mere 4 months). Here’s the previous five years versus the last four months, telling you just how out of left field this move was…. As we posited in a similar post on Apple once, how would you analytically go about investing meaningful money in Tesla? The only way you would invest in it would be narrative-based…wanting to own a piece of Musk’s genius, a play on climate change, or feeling that Apple would pay $1,000/share for Tesla (maybe that’s what’s happening?)

Past performance is not necessarily indicative of future results

Finally, there’s a few saying this is as bubblish as Bitcoin at the end of 2017, which we couldn’t help but put to a chart to see for ourselves. Bitcoin was more than cut in half after that epic 120 day run. How will Tesla fare once the short sellers finally capitulate? 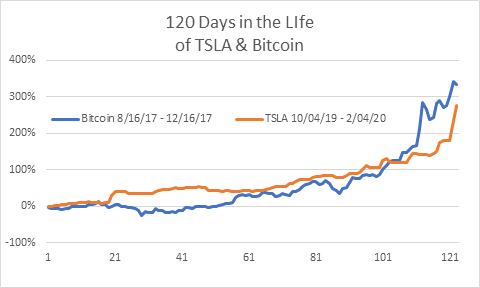