We’ve been talking about alternative investments that perform in a crisis for as long as we can remember. We typically refer to these as ‘long volatility’ type investments, that prefer and perform in periods of increasing market volatility. But we have also thrown around the terms crisis period performer (as opposed to absolute return performer). In general, we’ve been talking about managed futures, and more recently (past 3 years) active long vol traders who are in and around the VIX futures space. We’ve typically shied away from the “tail risk” moniker, mainly because there seemed to be a lot of not so good product out there being sold to retail via exchange traded and structured products as ‘tail risk’.  But the conversation has definitely shifted in 2020, and all anyone can talk about in reference to who did well in February and March of 2020 is “tail risk”:

The most recent interesting piece we’ve read on tail risk actually lumped long treasuries and managed futures under the ‘tail risk’ umbrella. The author essentially finds that tail risk as represented by the EurekaHedge Tail Risk Hedge Funds index is too expensive to hold long term, saying an ensemble approach would perform better. Here’s the money charts from the piece. The first plots various “tail hedges” overall Sharpe ratios against their correlations to the S&P, as a way to analyze hedge quality vs cost. The second runs the stats on these hedges across the dot.com burst, ’08 financial crisis, and recent Covid crash, which still doesn’t have a name (listed here as just Covid-19) 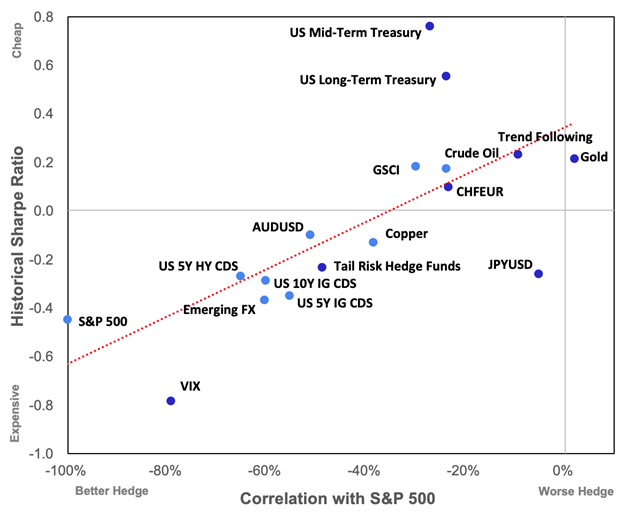 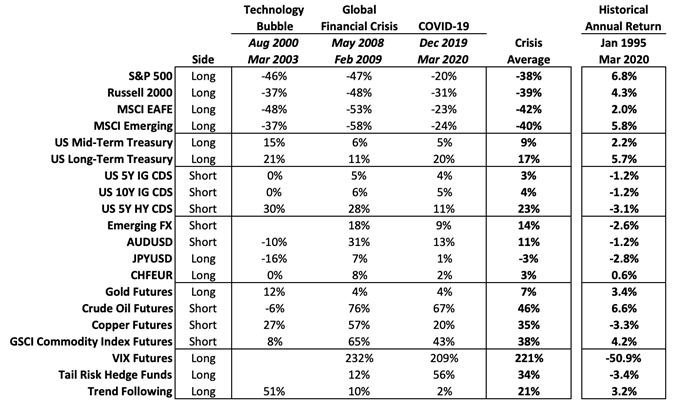 A few thoughts, in no particular order:

And finally, our main thought is that viewing the effectiveness over just three periods, or the cost, over a very long period – of these hedges sort of misses the point. They don’t exist in a vacuum, and they aren’t additive to a portfolio. You don’t just take that cost and return and add or subtract it to the rest of the portfolio (over time). No, there’s a thing called compounding and the rational investor’s desire to either maximize long wealth or minimize maximum drawdowns to be considered.

Indeed, Twitter lit up a bit around this post, with Asness weighing in/sharing in a sort of ‘told you so’ way, before saying the time periods likely aren’t fair and should include more data points. But the interesting responses surrounded the ideas that the analysis of these hedges missed two key components. One, the ability of certain hedges to allow for running the beta portion larger, and two, that it misses the whole point – harvesting these hedges convexity to reinvest back in the other asset:

A proper evaluation of tail hedges would compare how the asset changes a portfolio’s average return against its reduction in portfolio variance.  Simply looking at the tail hedge’s return itself misses half equation.

What’s more, it isn’t even necessarily about the math and how well you can do compounding. It’s easily just as much about the emotions and ability to get in or stay in “the market”, as we discussed in our post asking whether it’s too late for tail risk protection:

Indeed, the bigger power of [long volatility] exposure [isn’t the] returns in the vol investment. No, the power was having that protection to allow you to get back into the market at a much earlier point, knowing you had coverage should we keep going down. Its power was its ability to let you not miss out on a quick 100% spike in equities, what some called the most hated rally in market’s history because of the lack of general participation due to fear that the worst wasn’t over.

Who knows if markets keep going lower, snap back higher, or something in between…nobody. But long volatility investments that help protect against the downside, paired with owning stocks, real estate, and more help you say… Who Cares? I’m covered!