Everyone’s Banking on a Rate Hike

When the Federal Open Market Committee finally raised rates to the 0.25% to 0.50% last December, it was the first time in seven years. Indeed, the  fact that we just quote those minuscule rates and a range instead of fixed level shows just how different a rate environment we ended up in after those seven years. Now, in eight days, the FED have the opportunity to raise interest rates for the second consecutive December (so much for raising in back to back meetings as used to be the norm), and it appears as though everyone’s banking on a Rate Hike. A quick look at the CME’s FedWatch Tool shows the Fed Funds futures implying there’s a 92.7% percent chance of rate moving to 0.50%-0.75%. 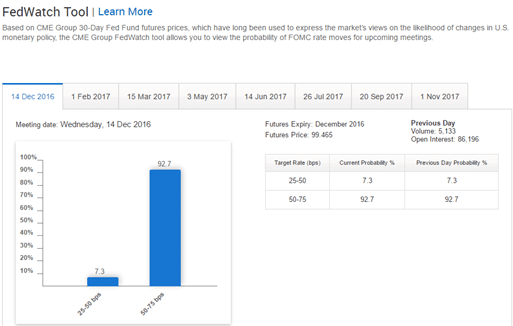 (Disclaimer: Past performance is not necessarily indicative of future results)
Source: CME Group

Now, this is the implied probability of a rate hike as expected by traders of the Fed Funds futures, but that’s a mouthful for reporters, who usually just throw out the percentage probability without providing context. In a year where predictability seems unreliable, we all deserve to know where the CME gets these numbers and how they draw these conclusions. Believe it or not, these numbers come from a futures contract. Not just any futures contract, but a Fed Futures contract or the technical name = the 30-Day Federal Funds Futures Contract.

Like the EuroDollar, the contract is quoted as 100 minus the interest rate, meaning the current December 2016 contract price of 99.460 allows hedgers/speculators to “lock in” a Fed Funds rate of 0.54%. As a reminder, the Fed Funds rate is the average rate charged by banks loaning each other money through the federal reserve system.

Now here’s where it gets tricky, because while the financial system takes its cue from the fed funds rate, they won’t necessarily adjust all of their interest rates up/down by that same amount. Long term rates might stay the same, short term rates rise more than that or any combo in between. The difference between the rates at all of those different maturities is what’s called the ‘curve’, and it can flatten or steepen depending on what short term rates like the 30 day Fed Funds rate are doing in relation to interest rates on longer term instruments like the 30 year bond. It’s also the reason there are all sorts of interest rate futures contracts spanning the time periods on this curve, as  there are some who need more risk granularity (did we just coin a term?) than the 30 yr bond or Eurodollars futures can offer. There’s those who need to have a direct hedge on the fed funds rate itself.

How does this affect me? 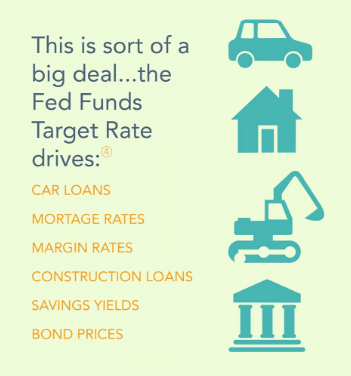 It affects… well everything.  Ignoring the actual pricing of bond yields and the price of stocks and bonds reacting to new rates, it affects more than you think. If you’re buying a car or a home anytime soon, it might be wise to get the deal done before rates go higher. Same goes for expanding your house – or businesses taking out loans to expand. Here’s a nice list, via our infographic.

How will this affect Stocks/ Bonds?

Now to the how this affects the markets. Just before the last interest rate hike, we computed how much stocks and bonds moved months before and after the start of the rising interest rate cycles.

(Disclaimer: Past performance is not necessarily indicative of future results)
Via: Infographic

Of course, past performance is not necessarily indicative of future results. For one, previous interest rates cycles have never started this slow (with nearly 12 months between decisions to raise rates). But The Wall Street journal has a neat tool to show how a rising yield what affect government bonds both in the U.S. and abroad. For instance, if the yield moved up to 0.30% next week — this is what it would do to bond prices.

(Disclaimer: Past performance is not necessarily indicative of future results)
Source: WSJ

We’re entering an interesting moment in the markets – with the U.S. Dollar trending higher, interest rates moving up, and stocks at all-time highs. We won’t say anything bad about stocks, but it appears bonds are no longer in a 30 year bull market (although the street is littered with failed trades trying to correctly pick the exact timing of that move). Better to trend follow that move, in our opinion, something which has been painful throughout the past few years of false breaks higher in rates. If this move has some legs, we could be in for some good times ahead for trend following models designed to capture such moves.