The Rules of the Crude Oil Market Have Changed

We gobbled up the CME Group’s recent whitepaper on Crude Oil,  loving all things Oil and Crude Oil futures related; and it is spot on (if not a little self serving) with the new dynamics in the energy sector due to increased supply and the US market’s ability to export that supply.

Remember that everything changed in the crude oil sector when the U.S. officially lifted the export ban on crude in 2015, making WTI Crude Oil (WTI = West Texas Intermediate) more on par with Brent Crude Oil.  Before this period, Brent was used as the international standard, simply because WTI crude (which is US crude oil) wasn’t able to be exported (much less moved out of Cushing, OK very easily); while Brent was shipped around the world without hesitation.  The CME’s in-depth article looks at just how much of an impact lifting the ban has had on the production, distribution, and price fluctuation for the crude oil business. Take a look at the price difference after the US lifted its ban on exporting crude oil, via the CME Group. 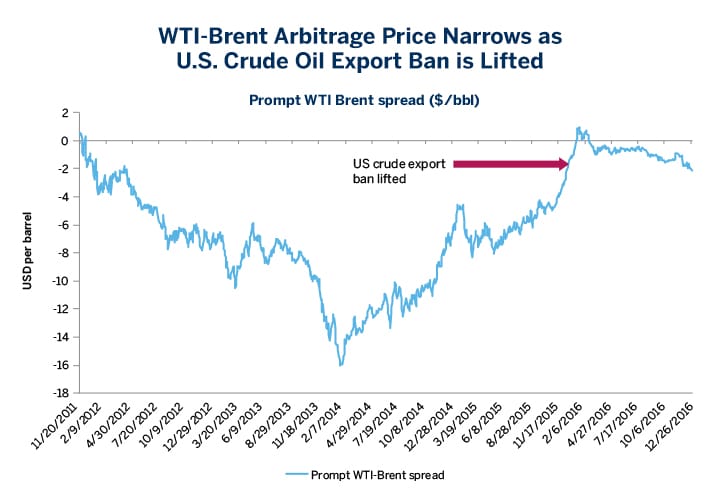 You can look at that chart and see the spread roughly at the same level now as when the ban was lifted. But a lot of that has to be buying the rumor, selling the fact amongst traders. The export ban surely didn’t happen overnight, it was months and years in the making. The CME Group suggests this ban lift came from a sharp rise in oil production, going from producing 5.1 million barrels a day in January 2009, to 8.8 million in October 2016. At one point, it was at its highest in March of 2016, producing 9.9 Million b/d. That’s quite a jump, and would definitely help explain why supply is one of the reasons prices have pushed lower over the past two years. The argument is sound… we’re drowning in excess supply of this stuff, pushing down prices, hurting US companies and jobs which has let us ship it out of the country where it is wanted.

If that big increase in supply was the impetus, what happens when supply increases yet again? The CME shows us that according to the EIA, we should expect production to grow by at least another 3 million more barrels a day over the next decade. 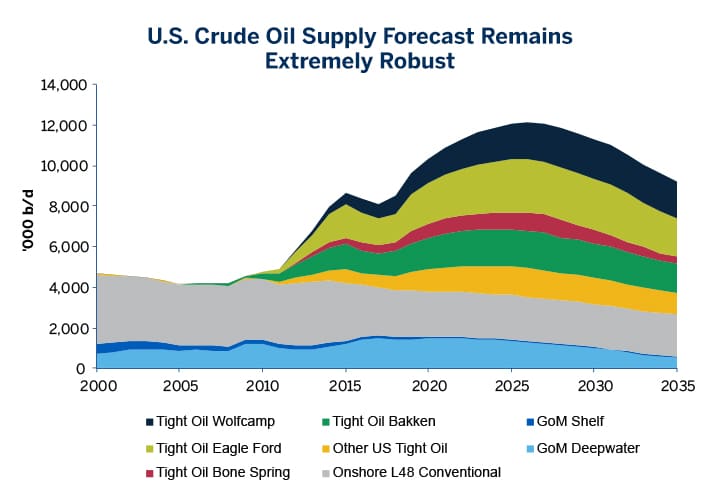 The interesting part of this graphic is the breakdown of the different types of ‘US Oil’, with the gray representing the traditional Texas, California, etc. oil rigs, the blue the newer traditional Gulf Of Mexico production – and all those other colors the shale and fracking revolution. You can see from CME’s graph that the major production in oil isn’t coming from conventional oil, but all the alternatives out there like “Tight” produced from shale, sandstone and limestone formations.

Wherever its coming from – this growth in US production, combined with the lift on the ban, has re-energized the debate over which oil contract is the standard in crude oil contracts. Here’s the CME:

The WTI-Brent spread has become a true indicator of value for the U.S. crude exporters. With the spread trading between $1 and $2 per barrel discount to Brent, traders say that increased volumes of WTI linked crude oils may flow to countries outside of the US and Canada. Part of this is due to the relatively low cost of freight with traders able to benefit from the ability to offer a US bound cargo and a now a US origin crude oil export cargo as a single transaction to a ship owner. Without US crude oil exports being permissible, ship owners were previously only able to pick up US bound cargoes and struggled to find any return cargoes leaving their vessels out of place for subsequent voyages. Shipowners now have the choice of a back-haul crude oil cargo or a refined product cargo as the US exports both. This tended to result in higher freight costs to a charterer due to the lack of economies of scale (for the ship owner).

Further, the recent expansion of the Panama Canal allows for enhanced shipping alternatives for cargoes to transit from the U.S. Gulf to the Far East. The significant discounts for WTI compared to Brent from the past are unlikely to re-appear as any mispricing would be quickly re-aligned through a rise in U.S. crude exports, which was not the case in the past when U.S. crude remained non-exportable.

If you’re familiar at all with the physical side of oil, you know that most of it ends up in the Oklahoma town of Cushing. It’s where most of the Shale and Texas Oil is stored until shipped out, but the recent uptick and changing dynamics has spurred changed on that front, via CME Group.

Right on cue,  the CME Group has created a Crude Oil Storage contract. Each month, 7,000 contracts are sold auction still – which gives the buyers the right to store 1,000 barrels of oil off the gulf coast. The Wall Street Journal describes what happens next.

Once the contracts are sold through the auction, they can be bought and sold freely. At the end of the month, anyone holding a contract can use the storage space, which will hold the oil in either an above-ground storage tank or an underground cavern.

Of course, this is mainly for the players in the business….

So, who will use the oil-storage futures?

Producers, transportation companies and refiners all have exposure to commercial storage rates. A storage futures contract could allow those parties to lock in those costs ahead of time or trade them for profit.

Foreign companies might be interested too. Waterborne deliveries can be delivered to the Clovelly hub, along with oil from Texas and offshore Gulf of Mexico production. 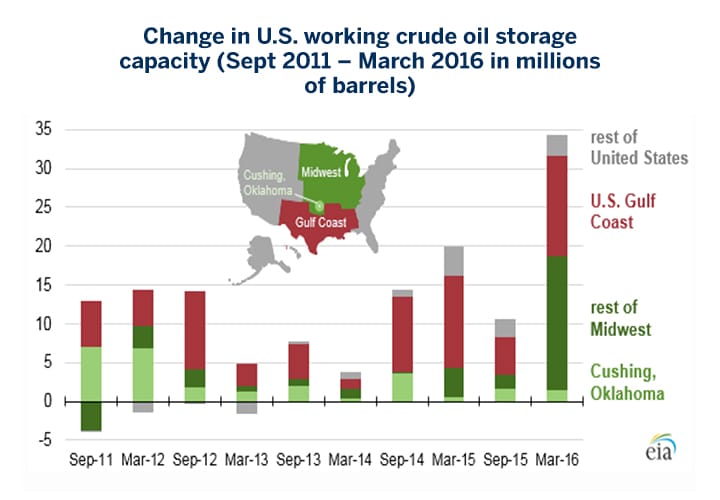 What Does This All Mean?

Well, for one, it’s the CME tooting their own horn here, a bit. They would like nothing more than for the majority of Oil hedging and trading to be done on their own WTI Crude Oil Futures contract, versus the ICE’s competing Brent Crude Oil Futures Contract. What better way to convince you to trade it than point out how its supply is growing impressively both in sheer numbers, and in number of places producers can put it. With a more diverse storage geography in the US (plus the ban on exports being lifted), WTI can be sold to more places and more customers around the world – meaning more places and more customers will need a handy futures contract tracking its prices to hedge with.

The CME wants us to acknowledge that the WTI contract can once again look like the benchmark Crude Oil contract for the world, and they may be on to something. Now, if only they could tell us which way prices will go – we’d put on some trades in their beloved WTI contract. Of course, without that crystal ball – we’ll just have to enlist one of these four hedge fund managers specializing in energy instead.