No one Knows How Big Managed Futures Is

Trying to decipher the assets under management for the Managed Futures industry is enough to give anyone a headache. At first glance, it appears the Barclayhedge CTA Index recorded $13.3 Billion in inflows in 2016, enough to push the asset class to new all-time highs of $340 Billion in terms of assets under management, eclipsing the levels seen in the first quarter of 2013.

Our initial reaction to that news is that it’s good to see investors and institutions see the value of this asset class despite Managed Futures having a negative 2016.  But there’s also some debate on this number. Evestment, for example, has the industry gaining just $10.3 Billion (the only hedge fund strategy seeing inflows according to them).  And we’ve long taken issue with the numbers reported as assets under management in the space by Barclayhedge, who include the world’s largest hedge fund, Bridgewater, in the managed futures asset total.  In our opinion, this does a disservice to investors, vendors, and business people in the industry trying to gauge the size of the space and where they fit into it.  Add to that the fact that Winton is a $30 Billion+ manager who tends to dominate the asset raising in the space, and it’s not too big of a stretch to say the majority of assets as reported by BarclayHedge are from just two firms (Bridgewater and Winton).

Here’s a view of how much that record $340 Billion is really comprised of Bridgewater, Winton, and other giants. 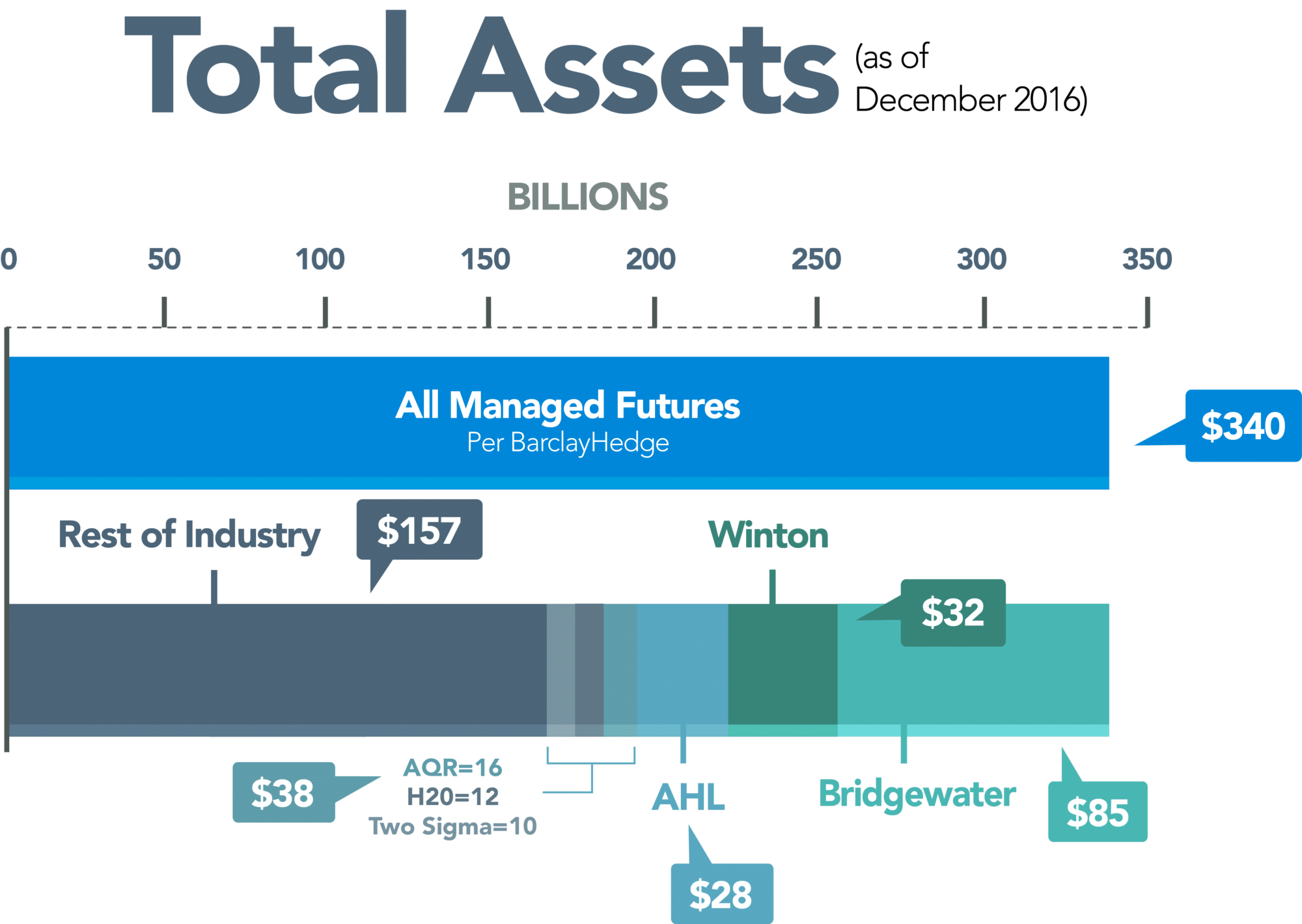 As we’ve talked about in detail, the top 5% of firms with the highest AUM control 66% all the money in the managed futures space.

But last year showed some promise for the rest of the Managed Futures space (“the field”) in terms of new assets, with about three quarters of the $13 Billion raised going to firms other than the Big 3 (1 of which shouldn’t even be in the conversation), leaving an impressive $9 Billion of asset growth on $161 Billion (about 5%).  Here’s the breakdown of reported asset growth, both including and excluding Bridgewater, Winton, and AQR.  As an aside, it’s hard not to be impressed with what AQR is doing with their AQMIX Liquid Alts fund, which has allowed them to outpace the heavyweights despite a crummy -8% 2016 return. 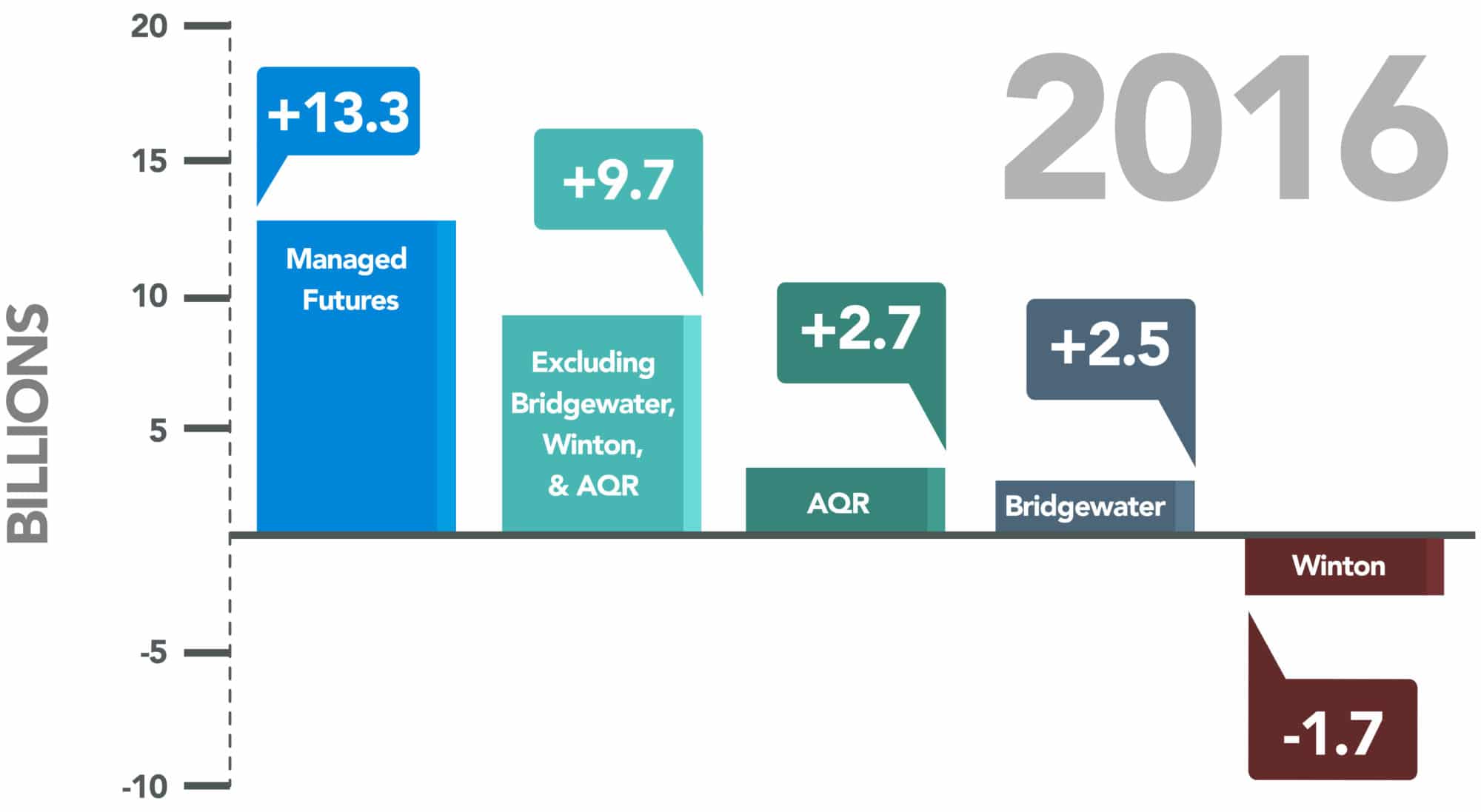 Of course, expanding our view beyond just 2016, we can see that the “field” outpacing the favorites in terms of asset raising has not been the norm. In fact, the amount of assets raised by Bridgewater, Winton, and AQR since the beginning of 2009 ($115 Billion) has been about six times the rest of the industry ($20 Billion). Again, don’t blame us for Bridgewater skewing the stats. Here’s what the growth in assets has looked like since 2009, where you can see the field having trouble getting back to new highs even while the total industry has hit them. 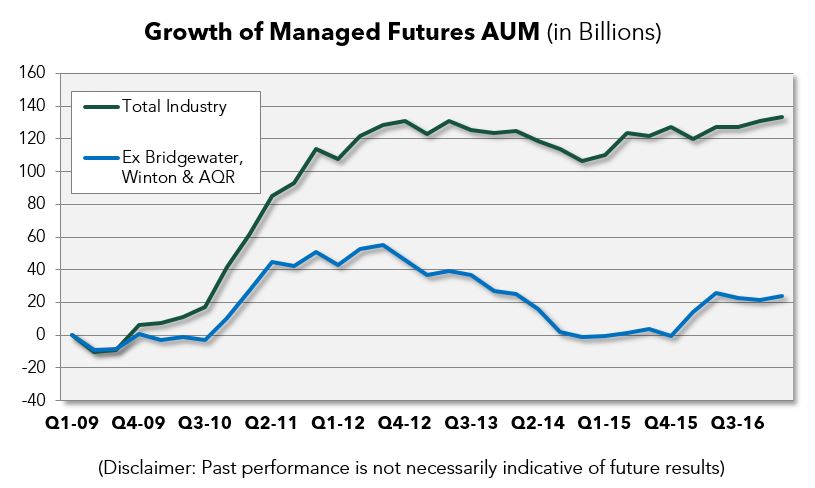 And finally, some interesting stats that jumped out to us:

In the end, there’s enough good news here to go around for everyone. Yes, most people we talk to agree that risk parity hedge fund Bridgewater should not be part of Managed Futures assets – so we’re looking at managed futures assets of more like $209 Billion, roughly half of which is comprised of Winton, AHL, AQR, H2O, and Two Sigma (which may be misclassified as well). But we still saw growth in assets for “the field” of managers not included in those names. If the big get bigger and  the small get less small – that’s an encouraging sign. You can’t get to a billion without first passing through a few hundred million.  That the industry is really only 2/3 the size its reported to be, is also good news for those who feel the industry has gotten too big and there are too many strategies chasing too few trends. Of course, the too few trends part may become problematic. We wouldn’t bet on investors repeating their 2016 moves and buying into managed futures losses this year. If we continue to see managed futures as a whole struggle, 2017’s numbers are likely going to be down.