It’s sure fun to be alive in the time of Twitter on days like yesterday. No, it’s not because Managed Futures programs instantly make money; nor because we are antagonists to the stock market rally (although maybe slightly); it’s because the financial twitter-verse explodes into activity at what maybe/possibly/could be the beginning of the end for this massive rally.  Yes, we’re aware it was just a small move, but it’s been so long since we’ve seen a sell-off more than 1%, most were treating it like it was a 5% sell off. Including the VIX, which shot up 45%.

The VIX spiked 45% yesterday. That was its 8th BIGGEST one-day spike in history https://t.co/2KMteWPsTi$SPY $VIX $DJIA

Ignoring the 1% selloff, and focusing on the 45% spike in the VIX; the numbers can be deceiving. The VIX, after all, moved up just 5 points.

The VIX should be viewed on total pt moves vs % moves. On a point basis, today is 116th largest move ever. (cont)

Nearly all of the ‘biggest’ VIX % moves ever took place with the VIX beneath 20.

All of a sudden the 45% move doesn’t look so exciting when we consider what it actually means – traders adjusted their option pricing to assume the annualized volatility over the next 30 days would be 15.59%  versus 10.65%…… or 5.5% vs 3.8% over the next 30 days. Hardly the end of the world.

But a 1.5% move in implied volatility over the next month can be a big deal for someone like a hedge fund which is levered and trading derivative products with built-in leverage. That small move can cause much bigger issues in such cases, and that’s why just about this time people start asking how Hedge Fund and Managed Futures programs performed during yesterday’s sell off. First, we’ll admit this is sort of dumb – per the old lost the battle but winning the war analogy. It was just one day, after all, and there’s 239 more of them in the trading year.

But at the same time, the space has been rather starved for volatility, while also moving into ever shorter and shorter time frames – not to mention the growth of programs and managers utilizing VIX futures in their trading approaches. So, enquiring minds want to know – what did yesterday look like. Well, hate to disappoint you, but it was mixed.

– Longer Term momentum/trend following based managers =  generally struggled with the day’s price action – being that the global stock sell off was contrary to the existing up trend.

– Short Term/Day Traders = generally good performance, with the equity markets closing at lows of the day a positive for positions entered during the sell off

– Option traders = generally down per the spike in vol and their prevalence to be option sellers, but excited to be able to sell higher premium at the new prices

– VIX traders = mixed, with some correctly on long side of VIX (hedged with long S&P), while others caught with hand in the cookie jar hoping to grab one more wasting-asset frosted VIX-crispy.

– Non futures hedge funds = down, most with long equity exposure

But aren’t managed futures, in particular,  known for their “crisis period performance?” Why did classic trend following CTAs not capture the mini-crisis? Well, for one – it wasn’t really a crisis – it was what used to be a quite typical daily market move in what once were normally volatile equity markets. But more importantly, managed futures crisis period performance is really a two-part act. There’s the initial shock (ie. Day after Brexit, US Election, etc.), and then there’s the aftermath. The shock typically causes a reversal in the sustained trends which can be bad news for trend followers who are designed to ride those trends until they end. They then must wait for a new trend, in the new direction, to identify itself. That typically doesn’t happen on the same day… and we can see that in looking back on previous crisis periods, where it wasn’t the initial shock where Managed Futures made their money; it was the aftermath. If we look back at the last major crisis period (2008), we see that The Managed Futures Index didn’t start seeing large gains until a couple months into the crisis. 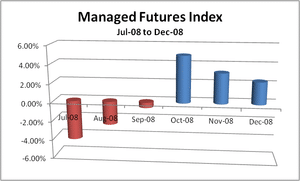 Which brings us back to the HUUUGE move yesterday (in our best Alec Baldwin doing Donald Trump voice). For some, this was a triggering event, adding to positions or hedging positions based on the spike in volatility. But it was just noise for many systematic models, which are waiting to see if it portends further volatility and continuation moves in various markets.  Meanwhile, all eyes will be on Mr. Trump and what happens next, as shown in this Stocktwits chart looking at the chatter about $SPY with Trump mentions along with 10 days trailing bullish and bearish sentiment.