The Tail has Wagged the Dog

It’s the question we’ve been asking ourselves over and over. VIX somehow kept going lower and lower year after year. Slowly, million and millions were being invested in volatility based markets, specifically short volatility strategies. As people continued to buy every dip in stocks, or sell every spike in volatility – the trade grew and grew – with roughly $3.7 Billion in assets on the short volatility trade just within the ETF/ETN space. The short vol trade began to dwarf the amount invested on the other side. Here’s a chart form our 2018 Managed Futures / Global Macro Outlook: 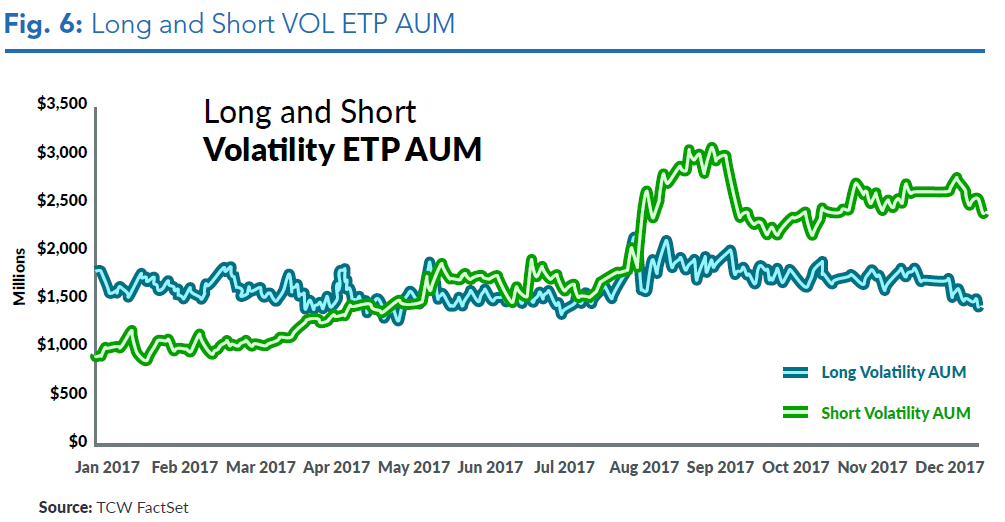 We’ve been talking for a while about what the dangers might be of more insurance sellers (VIX sellers) than buyers (VIX buyers), see here, here, and here – and it appears we got a taste of that on Monday after hours, when the rebalancing of some of these VIX ETPs sent the VIX screaming after hours, despite the stock market not necessarily falling at the same pace – essentially wiping out $3.1 Billion of assets from two of these products. Here was Bloomberg:

“Everybody knew that this was a huge problem,” said Shah, who was in his 20s when he helped create what’s become the market’s fear barometer. “Everybody knows that Inverse VIX is going to go to zero at some point, and all these inverse and leveraged products, not just in the VIX but elsewhere too, at the end of the day cost people a lot of money.”

Meanwhile, mutual funds such as LJM which trade volatility the old fashioned way – with options – saw much the same fate, failing to strike a NAV for two agonizing days before finally showing a loss of -82% on nearly $800 million.  When the dust settled, we’re now living in an environment where there’s nearly $4 Billion less short volatility supply than there was just a week ago, once you add in all the private funds that were also on this trade. 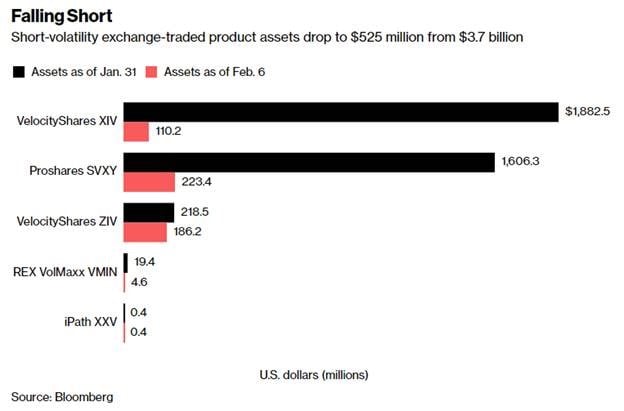 The Billion Dollar question is what does this mean for volatility looking forward?  Will sellers flood back in and fill up this supply again?  Or will this leave a hole in that side of the equation, making for more frequent and longer lasting vol spikes?  (the immediate answer based on today’s -1,000 point decline in the Dow looks like it may be the latter). We’ve wondered for years now what the effects of so much vol selling supply were on the market, and now we might be able to discern it over the next few months/years from the absence of that supply. Maybe there will be an asterisk next to the chart 10 years from now saying something like – this was when there was billion in short vol strategies artificially suppressing vol?

With equities selling off another 3% today and now officially in correction territory down 10% from their highs, the volatility traders who ply their wares in this space – see our “Investing in VIX and Volatility Whitepaper” – are sure to have their antennas up now more than ever. They all say they have more opportunity when vol is high – and they’ve now got it.

PS – If you were counting on a bond heavy crisis risk offset portfolio or the good old fashioned 60/40 portfolio to cushion some of this fall – it hasn’t been unraveling that way.

Of interest today… no real flight to safety in bonds.

Is this what a higher rates induced sell off looks like?

What happens to crisis risk offset portfolios, not to mention good ‘ol 60/40, when bonds go down WITH stocks… pic.twitter.com/iZHrK6gZPg