What a Difference a year 10 years makes. If you haven’t noticed from all the posts on your fintwit timeline, this past week marked the 10 year anniversary of the Lehman Brothers collapse:

Hard to believe the Lehman collapse was 10 years ago yesterday. It’s been quite a decade.

**The next decade promises to be even more disruptive** https://t.co/R30QLrY1nx

Here’s what it felt like in real time back in the day – an acceleration of a down trend that had already been in place since 2007. It wasn’t a shock. It was a confirmation that this is a once in a lifetime crisis. 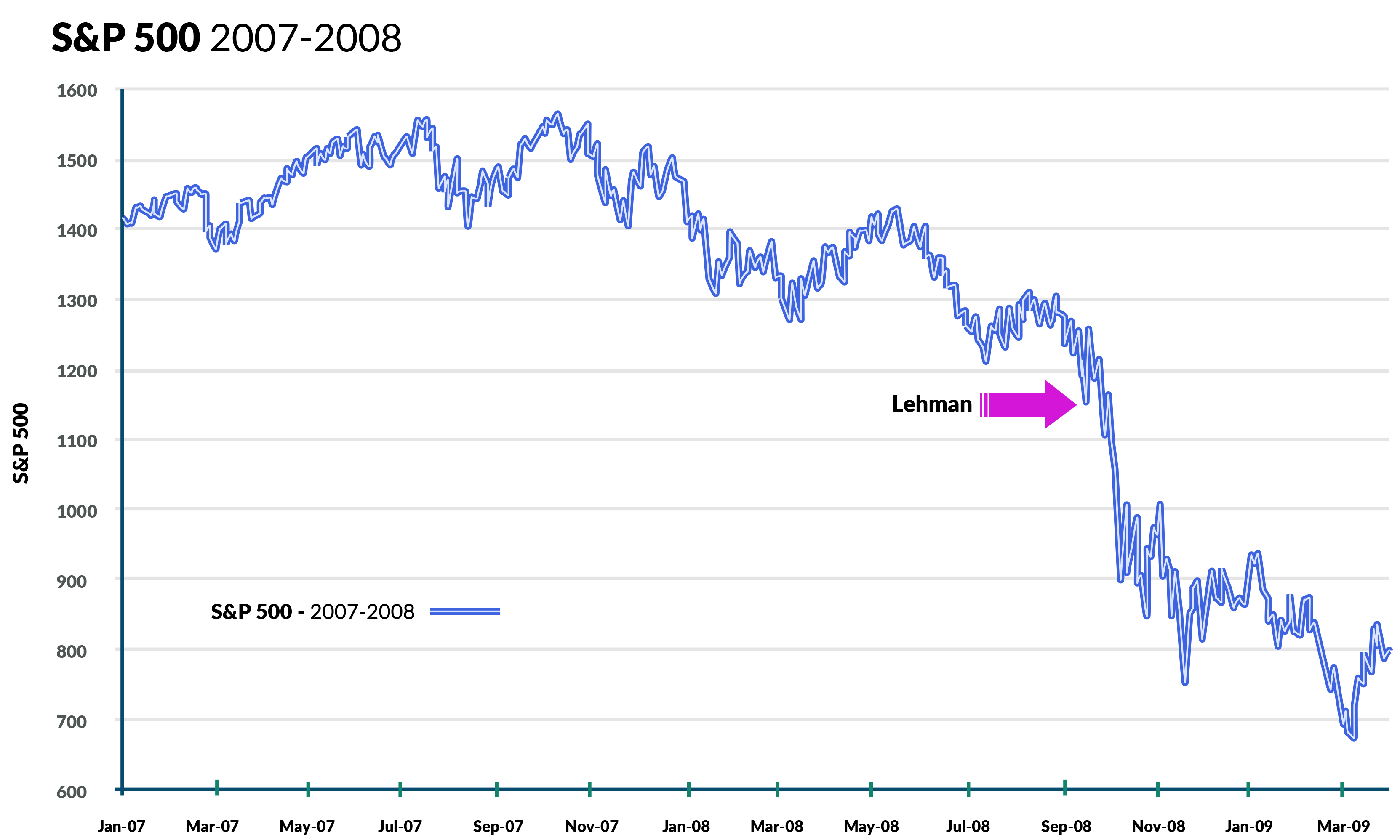 And here’s the thing – it wasn’t just the stock market. Essentially everything except US Treasury Bonds was selling off, in unison, in a big way. Here’s a snapshot from our December 1st, 2008 newsletter (yeah… we didn’t have the graphics department back then): 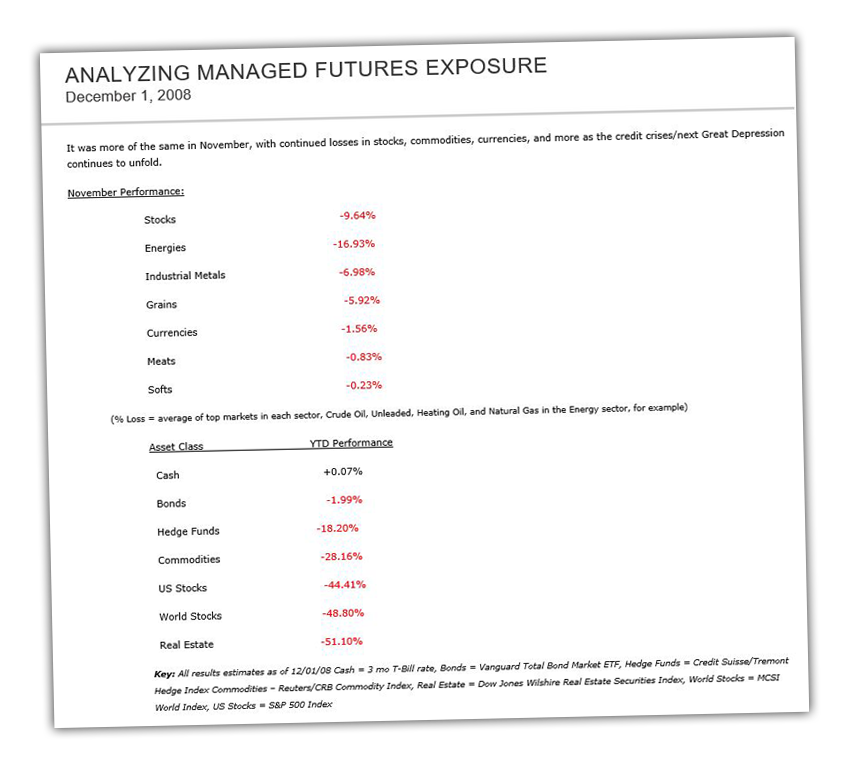 The least popular guys at the Party

But here’s the thing for those of us who were invested in managed futures or running a managed futures fund. We weren’t crying in our beers or unable to sleep (although we can remember vividly popping up out of bed like a reverse domino at 6am to see where stock index futures were. Instead of feeling pain. We in the managed futures space were LOVING IT!

And one of the best things about being in an investment which did so well during the crisis was the fun you could have at cocktail parties, in the locker room at the golf club, and at dinner with friends. The Lehman bankruptcy, a -500 point down day in the Dow, and so on was bringing out the shrugs and exasperated expressions, as those well to do’s around us murmured their version of the timeless classic:

And here’s where it gets fun… because our go-to response was:

“Sure was tough… we hope they go to zero.”

For those from the world of traditional investing, this was more than a little unsettling and cut a lot of conversations short.

We wanted it to go to zero because we were short almost everything. US stocks, European stocks, Asian stocks. Short, short, short.  Crude Oil, Gasoline, Corn, Cotton- short. Euro Currency, Pounds, Aussie Dollars, Copper, Platinum – short.  Portfolios had max risk on, and it was all capturing down trends (except for US bonds, which were decidedly long as that flight to safety market caught a huge bid, with the assets raised by the fire sale(s) having to go somewhere). And it was getting better all the time, with trends that began as far back as 2007 and as recent as August of 2008 moving further in the down direction, not retracing and eating into profits. 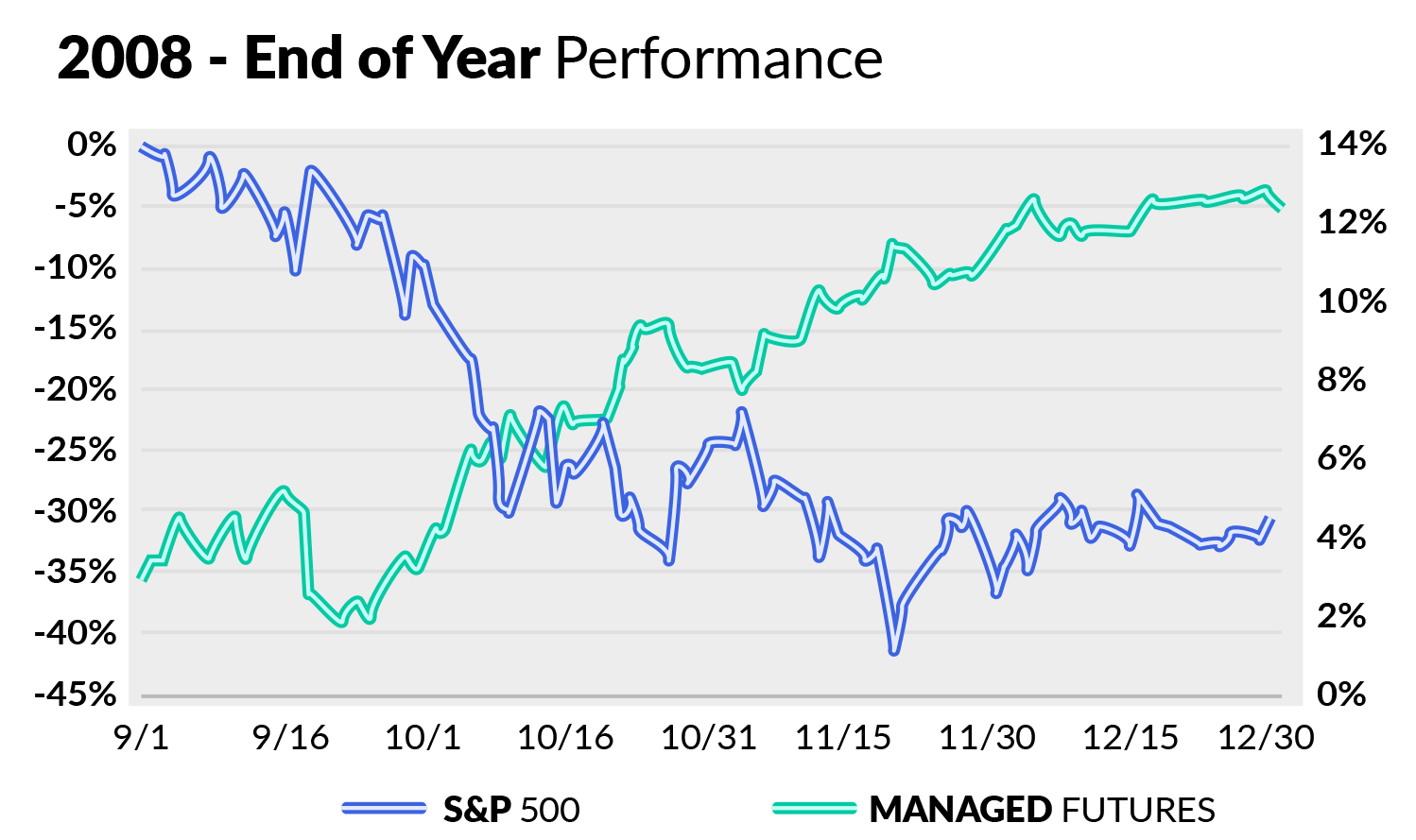 These were outliers on top of outliers, with huge winners in multiple markets at the same time. The portfolios are diversified to control risk, and position the portfolio so that something is always working in order to offset failed positions in other markets that are moving sideways without any breakouts. They generally aren’t meant to all be signaling short at the same time. And indeed, it was almost too good for some models – as profit targets were hit and volatility filters kicks in limiting the additional short, correlated exposure they could put on. But the result was as good as can be – with managed futures one of the only asset classes to post positive returns during the 2007 and 2008 financial crisis. 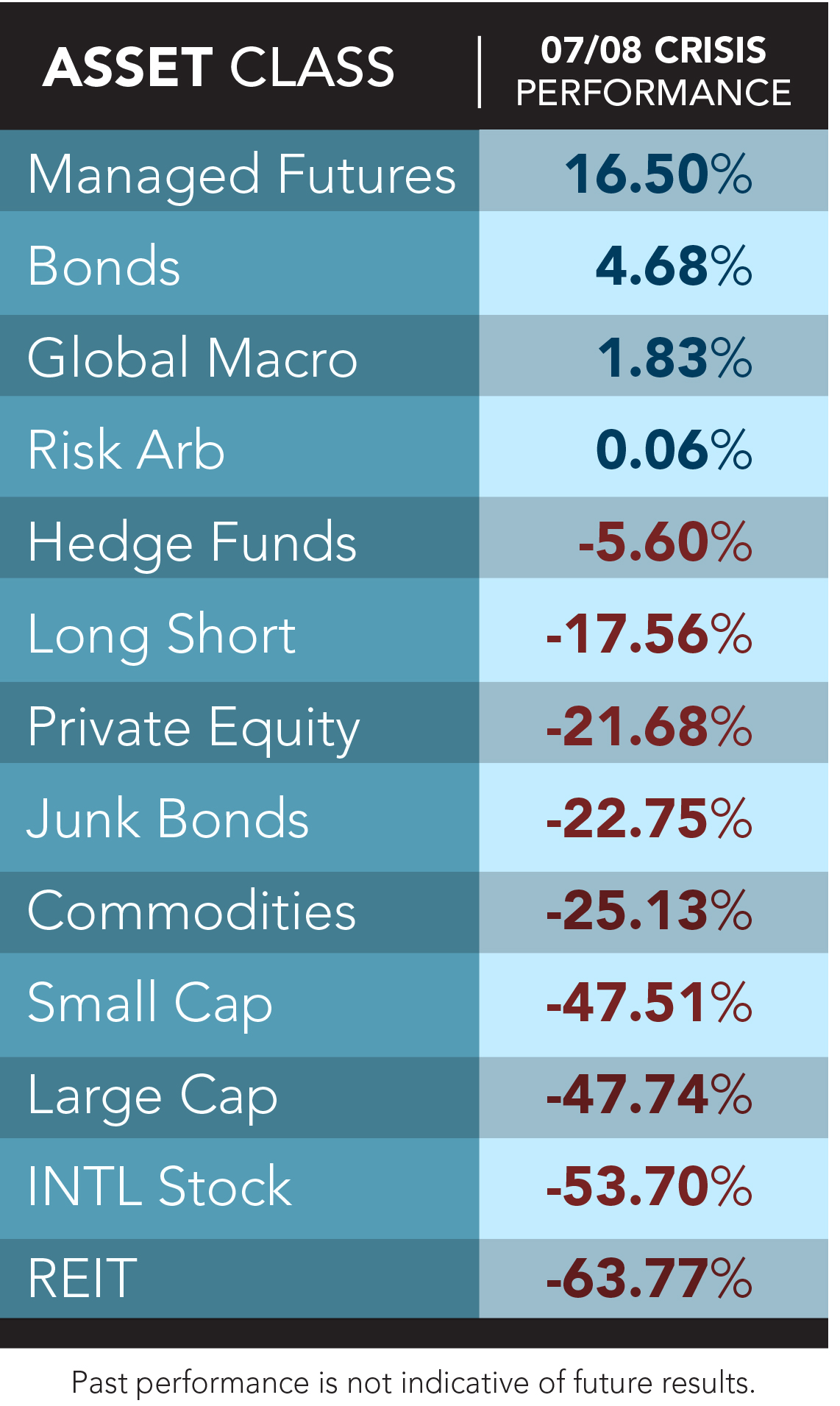 It wasn’t magic. It wasn’t a Paulson-esque big bet that happened to turn out. As we have laid out before, managed futures tends to do well during market crisis periods because 1. they get involved in all of the moves (even the ones that don’t turn out to be big), and 2. their ability to go short global markets.  We’ll not soon forget Lehman Brothers or 2008 in the managed futures space. It was our moment, to be sure, and represented validation of methods and theories worked on for years. It brought managed futures into the limelight in a way it hadn’t ever been before, even if it did make us the least popular people at the party.  It’s been a long, cruel slog since those heady days, with mostly flat performance outside of a good 2014 on the back of the Crude Oil sell off. And while many wait for another 2008 type move, many others aren’t counting on it. Their adjusting and adapting and making their models anti-fragile, to borrow a Taleb term, by allowing them freedom to capture returns not just in volatility expansion, outlier type moves – but also in plain, normal, boring, growing economies and rising stock markets.

Here’s to 2008, and the long road of progress since then.