Natural Gas back to Widowmaking?

While natural gas over much of past 4 years has been about as fun as watching paint dry – staying mostly in a range between 2.50 and 3.50, it has picked up in activity as of late, shooting up about 17% today behind some cold weather in the Northeast. It was enough to get Josh Brown tweeting:

I think it’s cute how every year the natural gas market is surprised by the first snow on the east coast. Special people trade in that market.

Now, Natural Gas used to be one of the most volatile markets around, with the market (and particularly the infamous March/April spread) lovingly known as the widowmaker by many in the industry for the sharp price moves it has been known to have, making widows out of many trader’s wives (I guess the metaphor goes…) as they take killer losses due to the out-of-nowhere volatility. This is the very market and trade that caused one of the biggest hedge fund blow ups of all time in Amaranth Advisors, who lost a few billion betting on Natural Gas movements, either ignoring or not knowing days like this one happen: 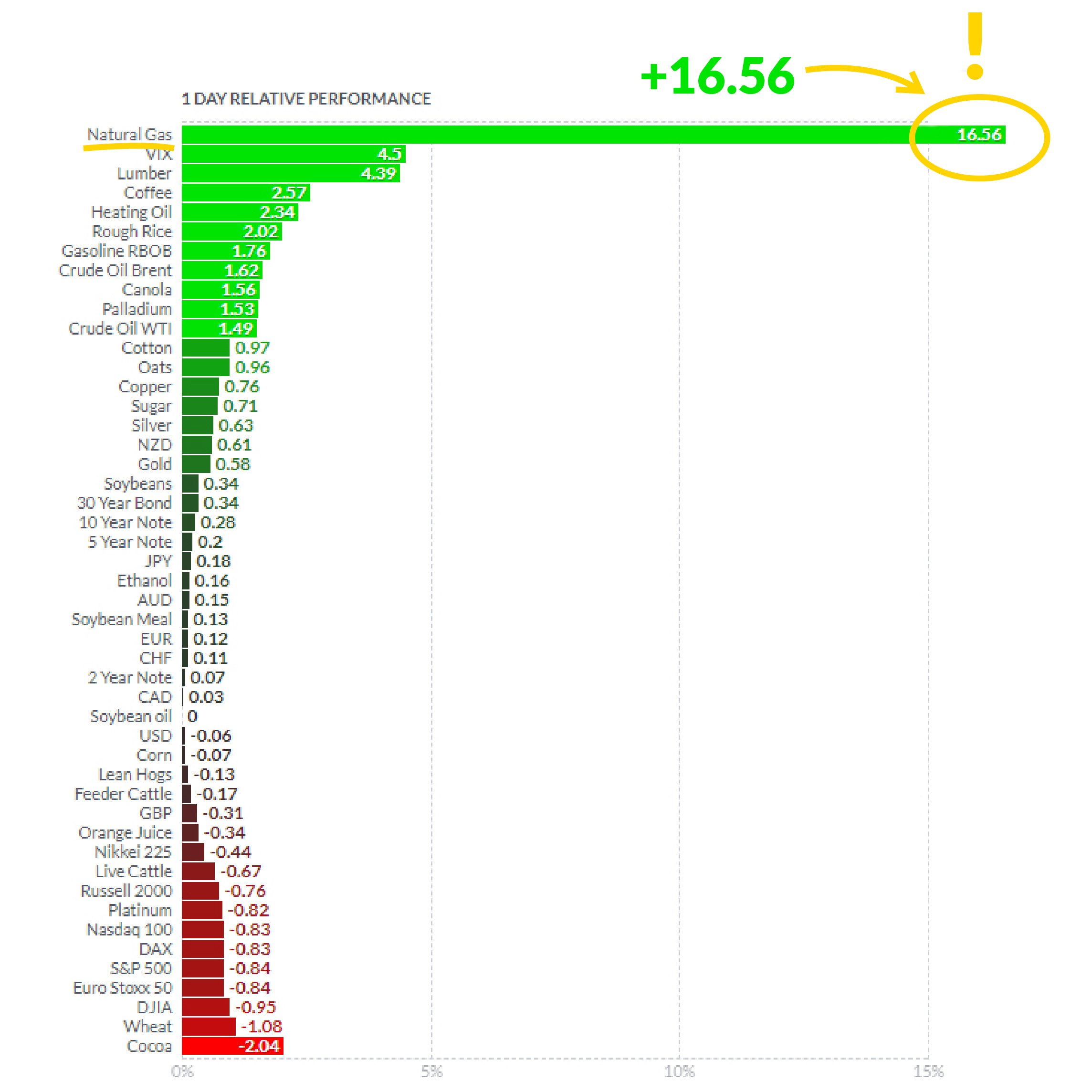 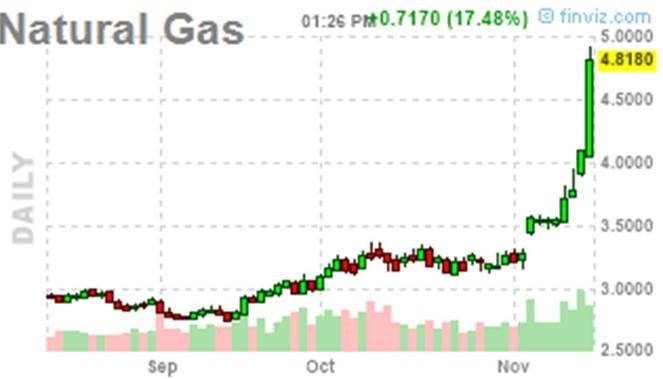 But since fracking became a thing and all commodity prices took a hit following the 2008 financial crisis, we’ve essentially been on the low side of the historical prices in a range between 2.00 and 6.00, even causing us to wonder if Natural Gas was one of the flight to quality investments a few years ago – along the lines of the Japanese Yen where you think: “it can’t go any lower”.

Well, as often happens in commodities (although not as much as systematic macro and managed futures hedge funds would like these days), periods of high volatility and 17% spikes tend to come out of periods of compressed volatility and a lack of such spikes. It’s like the markets lull you to sleep, before jumping to a new paradigm.  For those on the short side of this trade, we hope your models incorporated some of the historically high volatility of Nat Gas and didn’t have too much risk on. For those on the long side = congrats! We’re seeing a few of the trading programs on our books, including Emil Van Essen  and Resolve Asset Management long Natural Gas and enjoying the move higher. Watch the reverb, fellas!

A host of Nat Gas talk from our archives:

1. Natural Gas Near All Time Lows:

There hasn’t been a lot of talk about the neutering of the market formerly known as the widowmaker. The market that has seemed to miss most people’s radars is Natural Gas, which reached the second lowest close on record.

It sure is a weird set of circumstances when investors buying the long ETF are down about the same amount since inception as those buying the short ETF. They can’t win for losing.

The sneaky colorless, odorless gas has snuck back up over the past few days – and pushed through its past highs today going over $6 , something not seen by investors since 2009

Back in March, Natural Gas was stuck in a trading range of between $2 and $6 for 5 years.

The impressive decline of the spread between Crude Oil and Natural Gas in 2012.

7. Nat Gas: Return of the Widowmaker?

Someone (who wanted to remain anonymous) with 35 years of experience in the natural gas industry, shares his insights.

The yearly performance of Natural Gas Futures along with the other futures contracts back in 2011.

10. The Curious Case of Natural Gas

Would T. Boone Pickens natural gas legislation provide more supply to the industry, and therefore push down prices, or would the markets not follow supply and demand rules?

Would the T. Boone Pickens legislation change the landscape of not only the natural gas industry, but also the Crude Oil industry as well? Look and find out.

12. Is Natural Gas the new Flight to Quality Investment?

We have been noticing Natural Gas rising on big ‘risk off’ days, and saw the same thing yesterday. With everything down except flight to quality plays Yen, Swiss franc, US Bonds, and the USD.