Should Jon Corzine be allowed in the financial industry?

Think not…? Then email chairmanoffice@sec.gov and let the SEC know.

For those of you who don’t remember Jon Corzine, he’s the ex-Goldman senior partner-turned US Senator-turned New Jersey Governor-turned CEO of futures clearing firm MF Global. Just one little problem with this story…as the picture below alludes to, his tenure at MF Global saw him become a little less than honorable…. as he started betting firm money on complex sovereign debt repos, then used customer funds to meet margin calls, which led to a run on the bank of sorts, which ultimately ran the firm into the ground in what would become one of the largest bankruptcies in US history. 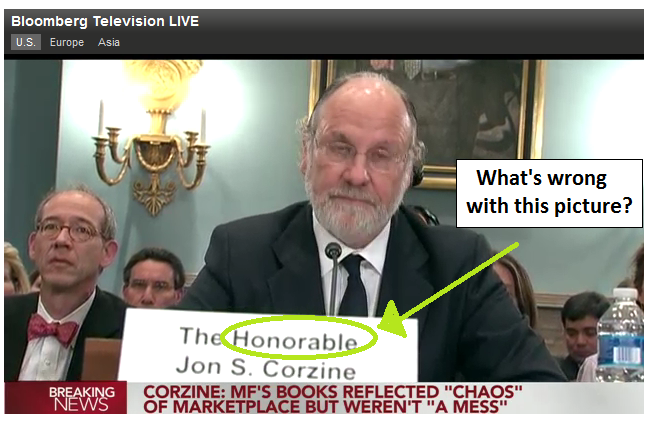 MF Global customers were mostly made whole at the end of the day (although the day was actually months), but this was an extremely tough time for those in the futures industry, with confusion over where customer funds were, what happened to trades in the last days/hours of MF Global, and where all those accounts would go. It was a massive blow to the industry, to the point where the CFTC filed a civil lawsuit against Corzine for the unlawful use of nearly $1 Billion in customer funds. He eventually settled for a $5 million fine and an agreement to be banned from the futures and derivatives industry forever. That all happened back in 2010/2011 and he settled in 2017.

Petition to deny SEC registration
Fast forward to the present time, and forever doesn’t seem to be holding up as well as all those wronged by Corzine would have liked. You see, Corzine wants back in the game – looking to start a hedge fund and seeking SEC registration in order to advise on securities for investors. This isn’t sitting well with former MF Global customers, and NFA board members Doug Bry and Ernest Jaffarian circulated a petition calling on the SEC to block the registration.

Everyone should sign this. Corzine should never be allowed in the markets (he should have gone to jail.) https://t.co/iYeXYvsYZB

Now, ignoring the fact that who in their right mind would want to give Corzine money after what he’s done. You know, the whole trade blow up, unlawful use of customer funds, and running a respected firm into the ground; the question has to be asked – what regulator would sign off on his registration given this history? Apparently, the SEC, as just last week, they approved Corzine’s hedge fund registration, albeit with some limitations like no proprietary trading and a requirement that positions can be liquidated within 5 days.

Well, as the Oceans Twelve line goes, there now seems to be some irregularity with the paperwork.

Here’s Doug Bry in an email over the weekend:
We submitted the original petition with our two signatures on July 31st, and unbeknownst to us when we submitted the final petition on August 6th with over 200 signatures, on August 5th the SEC had granted Corzine registration with conditions. We think this represents an error and an abuse of discretion on the part of the SEC, and in response have sent the attached to Jay Clayton, SEC Chair, requesting that Corzine’s registration be revoked or rescinded as improvidently granted, and the matter brought to the full Commission. Note that the attachment in one document includes the letter to Chair Clayton, the final petition with signatures (and many of your unsolicited comments), and at the end the order from the SEC granting registration.

We would appreciate it if you could send an email to chairmanoffice@sec.gov supporting our ongoing effort to deny Corzine SEC registration, or call the Chairman’s office at 202-551-2011.

All of this is to say….if you remember MF Global and don’t think Jon Corzine should be allowed within a few zip codes of customer funds for his remaining time here on the planet (as the CFTC felt), join Bry and Jaffarian’s petition by emailing chairmanoffice@sec.gov. If you don’t care, watch the Catherine Zeta Jones clip a few more times and wish for the best.