A few months back we were talking about the “Hogdiculous” market moves created by the African Swine Flu and sending the Hog market into a frenzy.

ASF is highly contagious –as in if 1 or 2 of your pigs shows symptoms, you’ll have to get rid of your whole lot kind of contagious – and there’s no vaccine on the horizon. China accounts for just below half of the world’s pork production and is also the top pork importing country. Basically, China consumes A LOT of pork. (For reference, the U.S. produces ~74 million pigs while China has 450-500 million; also, check out these “high-rise hog hotels” in China). 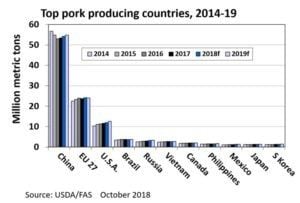 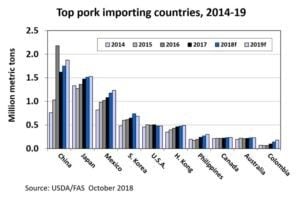 We were noting back in April that ASF in China could erase between 20-40% of pigs in China, creating a huge deficit across the country, and additionally affecting the American market through the Hog and Corn markets.

Fast forward 5 months – and there’s a bigger delay in the hog rally than we had expected, leading to a near full unwind of that Higdiculous move. Talk about buying the rumor and selling the news. 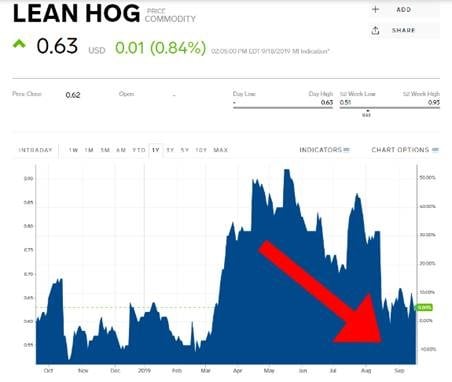 So what news are traders selling. Well, per National Hog Farmer (there really is a website for everything):

Producers in China have been moving animals to market in panic type fashion for fear of experiencing an outbreak. This has contributed to overproduction and contributed to the placement of huge amounts of pork into frozen storage. Second, it appears that China was holding far more pork in frozen storage than anyone realized. They’ve been pulling aggressively out of storage for a couple of months, again further delaying the acute production shortage that I expected to develop months ago….A major move upward in U.S. Hog prices will occur, likely at some point next year. (National Hog Farmer)

This is advanced supply/demand economics going on. There’s likely to be a shortage of pork – but before we get there, there’s likely to be an abundance of pork, because they are slaughtering pigs to eradicate the disease (and you can eat the pigs with the disease – no thanks, but they are in China).  Throw the tarrif equation (or lack thereof) on top of all this, with the possibility that American farmers won’t even be able to sell their pork into China in the midst of a once in a lifetime shortage there, and you have one confused market.