In an outtake from our Managed Futures Outlook 2020 – we can’t ignore the effect that politics have had on systematic trading programs over the past year or so.  Something that could take a toll in the year to come…. Trade wars, new presidents and new economic policies or the impending Brexit vote will have all too much power over the market peaks and valleys in 2020.

The run up [to an election or new law vote] is about investors positioning their portfolios for what may come. It’s people lightening up on exposure, adding safety, and so forth. When enough people do that sort of thing at the same time – you get a mini rush for the exits that can push prices in a certain direction for a certain amount of time. What we in the business call a trend, or momentum. We love these – they’re measurable, cyclical, capturable.

But, what happens on the day the vote is tallied is something different altogether. The vote itself is a binary event. It either passes or it doesn’t. If it passes, x, y and z happen in markets. If it doesn’t, a, b, and c happen in markets. You may be familiar with another popular binary event, the coin flip. Heads – you win, Tails – you lose. Suffice to say that the guys and girls with PhDs and sophisticated algorithms for tracking market prices and identifying patterns don’t quite like their life’s work boiling down to a coin flip.  These binary events and resulting short term moves can temporarily invalidate all of the math and research which go into the modern day systematic global macro or managed futures program.

Now, of course – most programs are diversified across markets and market sectors, designing their risk budgets to not lose too much (or gain too much) on any one day’s move in a single market. But there’s still outsized risk (and possible reward) from markets quickly reacting to a binary outcome one way or another….You can think of a binary event as concentrating weeks to months’ worth of market movement into a single day’s trading session, meaning you could see weeks to months of gains/losses in that day.

A good example of this was the last presidential election, when markets sold off heavily as it became clearer and clearer Trump would be the next US president. The S&P moved more than 125 points, falling about -6%, in a matter of hours. The range of the S&P in the 60 days before that had only been 110 points. We all know what happened next, the market quickly rebounded and is about 60% higher since then. But in that moment, all but the very quickest of systematic models were rendered useless upon the binary result becoming known. The binary event packed 60+ days of market movement into a few hours (on the overnight, sessions to boot). Code that into your AI.

Market moving news has always been there, and likely always will be. But it sure seems different (framing and recency bias warning) in today’s super transparent world where you can track where the tomatoes on your Impossible Burger came from. The telegraphed moves of the Fed, the measured words of every CEO and central banker, the ability of huge hedge funds and prop firms to trade off it in micro-seconds. All of it sure seems like it has dampened normal market moving news… and made these remaining binaries a little more market moving. The current technological, automated market appears to have squeezed in the distribution curve – making for taller heads (more observations of non-market moving news) and fatter tails (some rarer, very large moves). Beware the binary events in 2020! 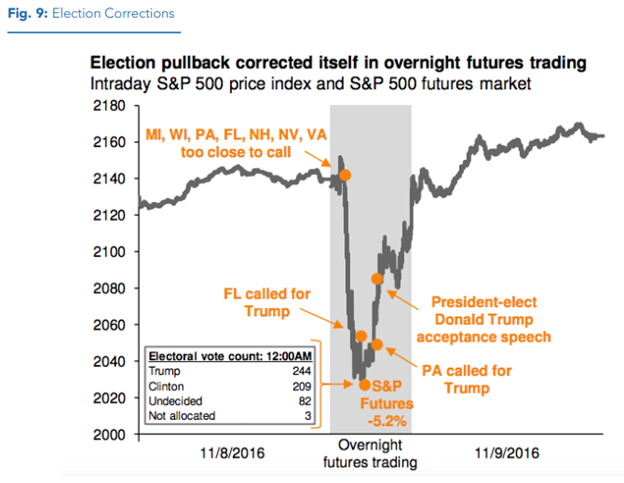