If anyone doesn’t know yet based off this month, and VIXmageddon in 2018, and the 2008 financial crisis – the VIX, or fear index as it’s known to have been called from time to time, rises quite rapidly when the stock market falls. There are all sorts of reasons for this, but the primary one is that the index is made up of option prices on the stock index, and as markets fall, people pay more for the Put options the falling market is getting closer to (or through). The end result is a rather persistent negative correlation between the sock market and the VIX. And in particular the S&P 500.

Here’s what that looks like via the rolling 30 day correlation between the SPY and VIX, with the logarithmic trend line down there around -.80. 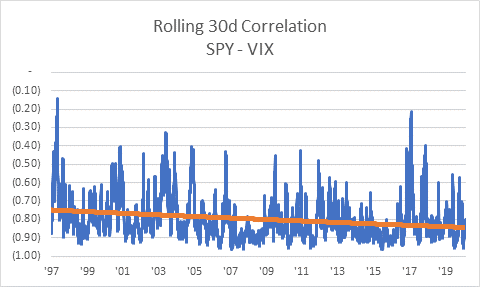 Cool…. All’s well in the world – and VIX goes up when stocks go down. Except….every now and then, what happened last Friday and this Monday happens:

Wait… what? How are they moving in the same direction when they are negatively correlated? Well, a few things.

2. ….When the VIX is up close to all time highs. We spoke on a recent podcast with Deepfield Capital’s Bastian Bolesta about a theoretical upper bound for the VIX, and there is a little bit of that going on.

3. They are two different instruments, with a bit of a mismatch in what time frames thay are looking at. The S&P, and stock market in general, is a forward looking indicator looking as much as 12 months our on what the economy and company earnings are likely to look like. The VIX is measuring the expected annualized volatility over the next 30 days.

Maybe it’s as simple as everyone is grossing down. Depending on when they were purchased, VIX hedges have likely become too large after this month

$VIX started super high. $VIX 64 is implying a daily 4 % move every day for the next 30. correlations are starting to normalize. Tech beating value past 2 days.

VIX is a very misunderstood instrument. Many people erroneously believe that it simply goes up when the market goes down and vice versa. That is not the case. VIX moves with volatility. Market volatility can and does move in the same direction as markets from time to time. Market volatility can increase with rising markets and market volatility can decrease with falling markets. Therefore, what we have seen play out in the last three days is nothing more than a low-probability, but fundamentally possible, outcome. We view the decline in VIX has gotten ahead of the math. But in these environments, none of us should be surprised if short-term dislocations occur.

In most cases, the VIX spot price isn’t terribly useful as an indicator of equity strength or weakness. Much more useful is the VIX futures curve, which also depressed significantly even as $SPX was dropping today. This is actually not terribly different than what happened a week earlier, but in reverse. The VIX futures curve provides general insight into the risk perception of the broader market. Today, the market is positioning for a US fiscal stimulus package that is expected to strengthen the markets. Despite being voted down twice in the senate, it is apparent that even if it takes a couple extra days, there will in fact be a massive stimulus package. The shift lower in the VIX complex today is a reflection of that expectation. Nobody really wants to be caught holding long volatility at 70 when the market calms.

Keep in mind that implied volatility peaks long before the equity market bottoms. Also consider what VIX at 75 means. It is generally an indication that a 1 standard deviation move in $SPX would be nearly 5% on a daily basis. Even if the equity markets are expected to continue lower, it would be presumptuous to assume that daily moves will continue to be on the order of 5% over an extended period. At some point, the daily moves must calm somewhat, and even if they were to remain in the realm of 3% per day, the VIX must then drop below 50 to accurately reflect expected realized volatility. – Brett Nelson, CIO and Founder – Certeza Asset Mgmt.

How frequent is this?
The Joe Tigay tweet saying there was six months of VIX lower, market lower back ion 2008 piqued our interest, so we went to the tale of the tape to see just how frequent this reversing of the normal negative correlation is. Here’s what we found looking back day after day all the way back to January of 1997 (about 23 ¼ years)…and after filtering out days in which the S&P moved less than 1% in either direction.

Here’s the chart plotting the occurrences per month, blue SPY UP/VIX UP and orange (SPY DOWN/VIX DOWN), and a few things stand out. One, this is yet another argument supporting the finding that volatility clusters. Abnormalities in volatility also cluster – and do so around times when volatility is spiking. Two, there were lots of up/up days in the late 90s during the internet boom – showing that upside volatility is a real thing….we just haven’t really witnessed it in quite some time. And finally, it’s interesting to note that it has become a rarer and rarer occurrence since the financial crisis and Fed interventions, and all the rest. Is this the Fed put showing itself in the stats? Or just a result of the extra low vol regime we’ve been in? 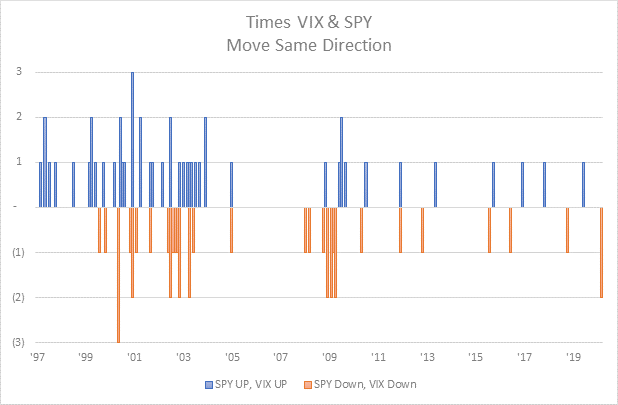