3 REALISTIC WAYS TO PLAY A BOUNCE IN OIL

When #crudeoil and $USO are trending on Twitter – you know it’s something more than just some 5% move or so; AND it’s about the exact same time we’re getting calls from people asking the best way to invest in crude oil and the best way to profit from crude oil eventually rebounding. Chances are, you’ve already been profiting from crude oil’s decline (we’ll get to that in a second) so it might not make sense to bet on the other way, but we know better than that. We know there’s those among us who see this down move into uncharted territory (the only time ever that crude has gone negative) and see the opportunity for a bounce higher.

Why is This a Big Deal?
Before you even have the thought of putting some skin in the game, it’s nice to know you’ve likely already profited from this crude oil move without having to put up any cash. Airline prices are falling due to Coronavirus (although do you really want to go on a plane), gas prices are the lowest we’ve seen in years with some stations selling gas for $0.75/gallon, and lower prices on electricity, shipping, plastics, and more should eventually  make their way to various products and services

But whether it’s Saudi princes or Russian tycoons, we’re almost pre-programmed as modern humans to crave the type of over the top money that is “oil money.” And without the millions to start drilling holes or bloodlines to be a prince – trying to time this bounce

So, what’s the best way to play a bounce in Crude Oil prices? Your friendly neighborhood ETFs? Most investors go the ETF route these days to bet on anything from real estate to bonds to global equities when trying to monetize an investment theme or idea. And the Oil price ETF $USO is one of the most popular ETFs out there.

What you Don’t Know about the Oil ETF $USO
It’s the most popular way to play Oil, to be sure, with $3.6 Billion in Assets and $736 million changing hands daily, but is the Oil ETF ($USO) really the best way to ‘play’ a bounce?

Well, first, remember what $USO’s stated goal is – to track the “daily” movement of oil. That doesn’t sound so nefarious; aren’t ETFs supposed to track the daily prices of the indices they track? Don’t investors want to track the daily prices? Problem is – it’s not as cut and dry as it seems. Tracking the daily prices is good if you are going to hold the ETF for one day, or even a couple of days; but can be not so good if your investment thesis is oil prices will climb higher over an extended period of time. Why? Well, here’s where it gets tricky; because $USO’s long term price appreciation isn’t the same as the whole of all of its daily price appreciations.

That’s because the ETF buys WTI Crude Oil futures contracts at the CME, and there are 12 different contracts in Crude Oil futures each year, you guessed it – one for every month. And while the so called ‘front month contract’ is trading near the number you see on the news every night, the further out contracts, such as 10 to 12 months from now, may already reflect the idea that Oil prices will be higher, or in our most recent case lower.

Indeed, the price for the December 2021 contract is $33.50, versus $15 for the front month. So there’s $18.50, or a 123% gain, already “built in” to the futures price. What’s that mean for the ETF investor? Well, if you are correct that Oil will rebound, and it does by around that  100% level, or $15 per barrel, over the next 19 months; the ETF likely won’t appreciate 100% as well. It likely won’t move at all, because it will have to sell out of its expiring futures positions and buy new (more expensive) futures positions each month (remember, there’s a contract for every month). This means it will essentially have to “pay” that $15 over the course of the year in what’s called “roll costs”. The process of moving out of expiring futures contracts into current ones is called ‘rolling’ the contracts.t

This is why $USO had drastically underperformed the “spot price” of Oil over the past 10 years (as of the end of 2019): 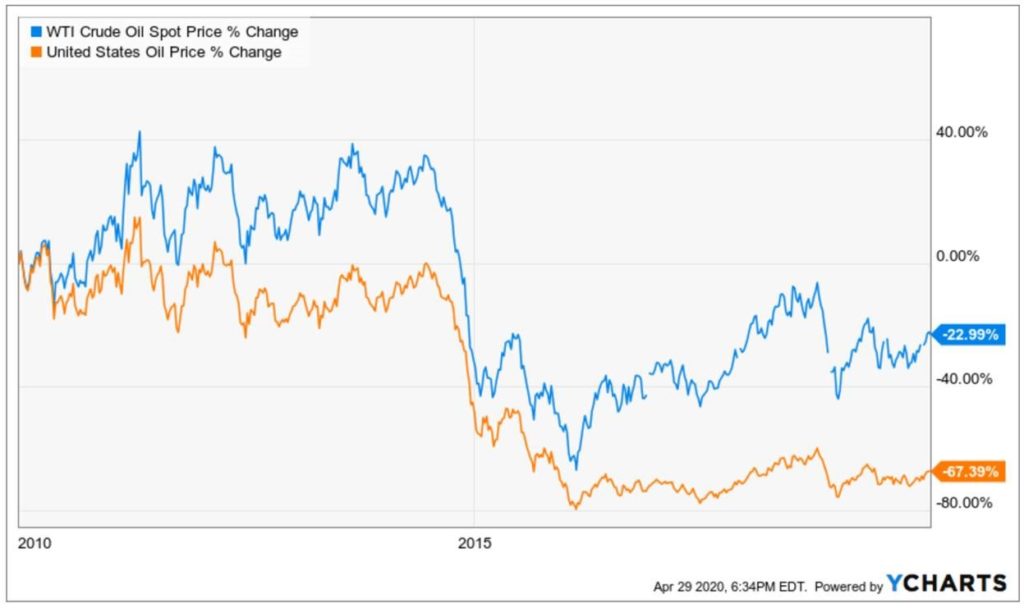 So, the use of $USO really comes down to when you think Oil will be higher. If you think it’s rocketing higher tomorrow – $USO is a good choice. If you think it will be higher many months from now, the United States Oil Fund ($USO) is probably going to disappoint you by providing some discounted version of Crude Oil’s actual gain (or worse – a loss when Oil gains). Here’s one of our favorite twitter follows Benn Eifert on the phenomenon:

If you have a hard time understanding why your VXX shorts made so little money in the rally compared to a similar risk position long equities, and you are currently buying USO because you think oil went down too much, you might need to learn about term structure

So, what do you do if your friendly neighborhood ETF isn’t the answer. You find some new friends…here are some more realistic, stretching it, and far-fetched ways to play a bounce in Crude Oil:

Our Recommendation:
Don’t just buy and hold Crude Oil. It’s known for violent swings and whether storing it yourself or paying an embedded cost to own the investment, there’s a high cost of carry.  Instead, be dynamic. Invest in a strategy that can do well when Crude Oil rebounds, but also does well when it is in free fall. And can also do well when Oil is doing nothing at all. Get exposure to energy prices, not exposed by them!