Just how crazy was September for VIX Traders?

Oil going negative. The Swiss Franc de-pegging from the US Dollar. The Dow losing 1000 points in 36 minutes in the flash crash. These were all outlier events there in plain sight, reported ad nauseum in the financial press. But the largest front month VIX index loss during a down month in the S&P 500 in the past 10 years, that’s not quite front page news for the Wall Street Journal. And, to be honest, it was a bit of a non-event except in the small circle of traders and investors who utilize the negative correlation between the VIX and stock market to structure dynamic market hedges. But in that small circle, September was as crazy of a month as most of them can remember.

For those of you who golf, you’ll know that the worst rounds come when you have a “two may miss” going. When you sometimes pull it, sometimes fade it – the ball is going everywhere and you have a problem knowing where to aim. September saw some of that action in the VIX, with volatility first rising along with the stock market, then rising along with a sell off, then falling with a sell off, before settling in to a more normal pattern towards the end of the month. Where, exactly, were VIX traders supposed to aim with this two way miss going on?

From a longer term perspective, there have only been two other months in the past 30 years which saw a larger decline in the stock market while the VIX also printed a negative value (Nov ’08 and Sep ’90), although there have been 14 larger volatility moves down when the stock market was also down more than -1%. Indeed, this happens around 14% of the time the market is down more than 1%, making it unwelcome, and even uncommon, but not unexpected. 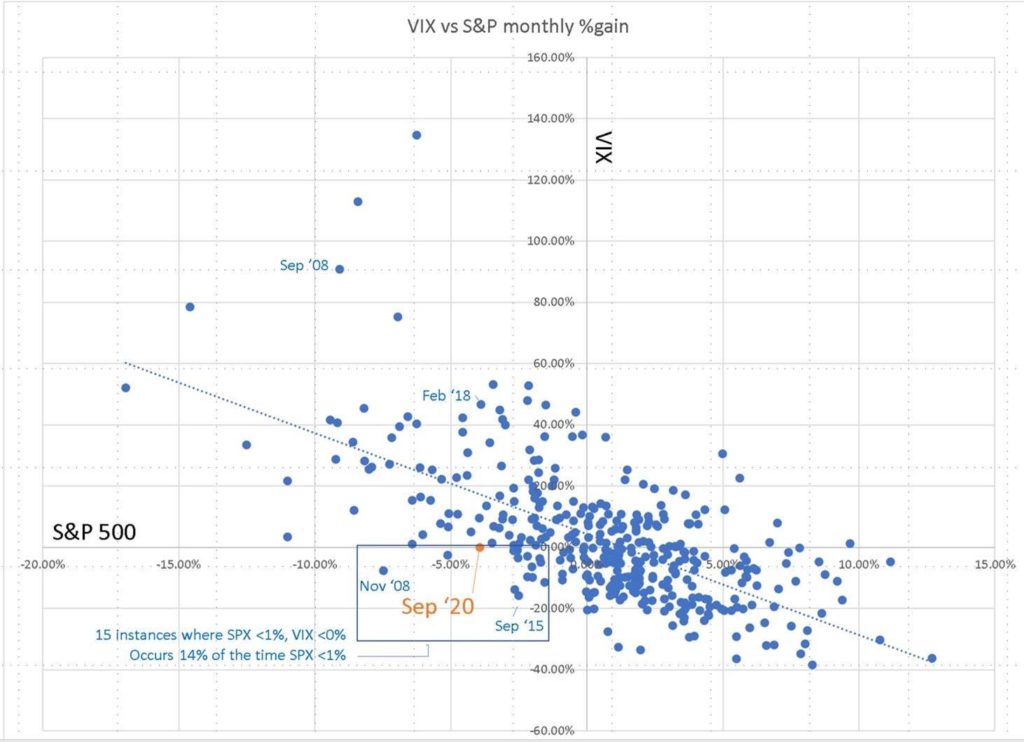 Finally, it wasn’t just a weird month for the VIX in relation to the stock market, but also within the VIX complex itself. As a reminder, you can’t trade the VIX itself, it being just an index. To gain access, you must trade VIX futures which expire every month. That creates a VIX futures curve which usually looks like the one on the left below (from Sep. 2018), in what we call ‘contango’ (being more expensive further out in the future). Except, the curve currently (the one on the right)  has this odd bump in it for the November contract, reflecting the potential election volatility in the US, and after that has nearly the exact opposite look as usual (backwardation, or cheaper prices out into the future). This is back to the two way miss phenomenon, as there is both contango and backwardation in the same curve, making It hard to bet on portions of the curve becoming more or less their respective stance.

Perhaps because of this unique curve in the VIX futures and being within 2 months of the US election, we saw some odd action in the different contract months of the VIX futures in September, such as the front month futures index down -9.5% while the 3 month futures index was up +3.2%. But it wasn’t just where these indices ended up, it’s where they were intramonth as well. You can see the ‘double miss’ type pattern below where the first part of the month saw front month futures outperform back month, while the second part of the month saw that pattern completely unwind and back month hold up while front month basically crashed. 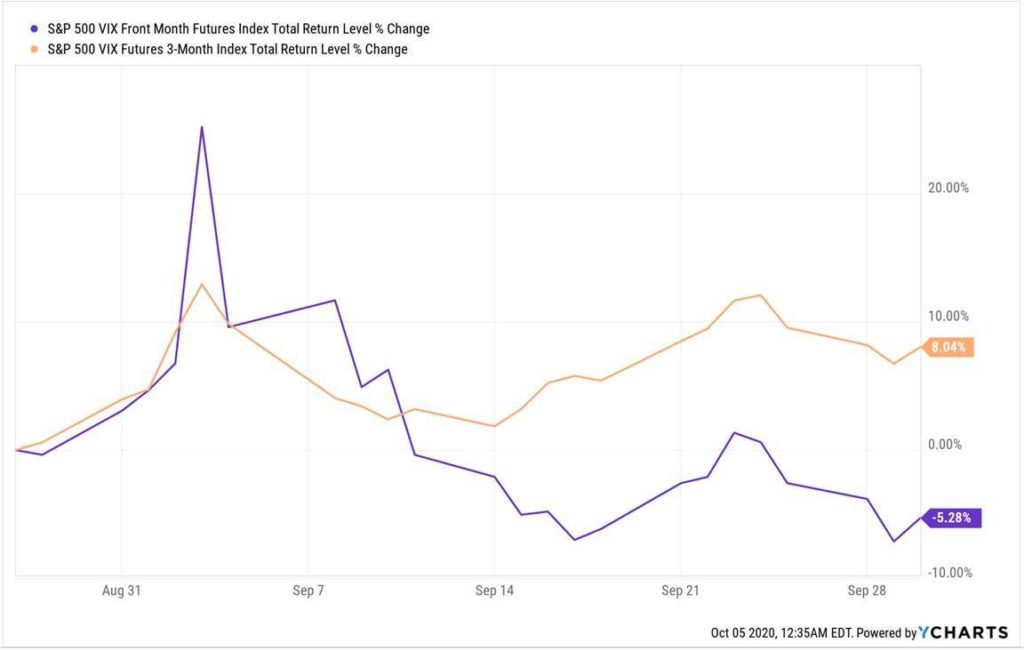 Add it all up and it was that weird for VIX traders in September. But it’s too easy to say it was some 1-in-100 year storm or some totally unexpected movement. The truth is the two way miss was more of the problem for VIX traders, with the month seeing on again, off again correlations through several mini cycles. As we said before, it was more unwelcome than unexpected.