Just about 6 months ago we were talking about how Silver had rallied about 100% since the March lows, saying rather sarcastically:

What’s going on – did Silver become a SAAS company in search of a ludicrous P/E multiple? No. This is overflow and unintended (or maybe intended) consequences of printing all that money for Coronavirus relief. A bet against the dollar. A bet on inflation (someday). Or, a bet on Gold without buying Gold – getting much of the benefit without the high cost.

If July was surprising, clean the fog off your glasses because as of early February, Silver hit an 8-year high jumping ever so briefly above $30/oz in the futures. And this time, maybe it really was in search of some crazy tech multiple. There were inklings of rumors going around that the same GameStop trolls/heroes were behind the magic rise in silver price:

A “short squeeze” on the silver bullion market became the hot topic of discussion on the Reddit site WallStreetBets last week and over the weekend. Stocks related to silver soon saw their value spike for no apparent reason.

First Majestic Silver, a Canadian silver-mining company with the ticker symbol AG, maintained a stock price of around $14 a share for most of this month, but then shot up 21% on Thursday after the Reddit discussion. Fortuna Silver Mines saw its share price rise 14% Thursday to $7.62. The iShares Silver Trust, an exchange-traded fund that tracks silver prices, rose almost 6% Thursday to nearly $25 a share. (CBS News)

But as we said in our original Silver post, this is exactly why trend followers, particularly systematic trend followers, have markets like Silver in their portfolios. They don’t care if the asset has never had a positive year in its existence! They don’t care because they look for asymmetric bets which payoff when outlier moves happen in either direction.

You never know when the next big outlier move is going to happen. You never know when the next swing is a home run. And, to keep the baseball analogy alive – the strike out is barely an out at all. It is infinitely less punitive in terms of game theory than 1 of the 3 outs you get in baseball. Assuming a risk per trade of 0.25%, this game has 400 outs – making a strikeout rather immaterial.

But you still go to the plate – because this happens – where Silver rallied 80%+ in 2010, returning 10x that initial 0.25% risk. Now, add 40 to 80 more markets across energies, currencies, interest rates, equities, agriculture, and more – and you see the game trend following is playing. (Hi Ho Silver)

So, we don’t know where Silver’s going. Nearing the end of February, Silver is still holding strong. And we don’t really care about the narratives, except to say if you do want to play Silver – don’t buy crazy overpriced coins or bars. Buy futures and take delivery for a warehouse receipt so don’t run into the problems below:

Physical silver is almost impossible to get right now, although it is getting a bit better. Ultimately, the markup is ridiculous, and therefore you have to be very cautious about buying physical. Recently, I have seen silver rounds sell for as much as $40. This is a complete disconnect from the futures market…(FX Empire)

We for one, will be keeping an eye out for higher prices and potential wallstreetbets infiltration. 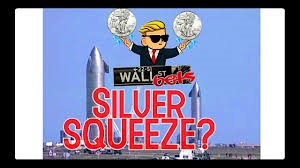