It’s beginning to look a lot like … Christmas.  Wait, we haven’t even had Thanksgiving yet, what’s with these people putting up holiday decorations in mid-Nov??

Let’s give Thanksgiving a little love. We can see next week’s feast now, sweet buttery rolls, homemade mashed potatoes, fresh-baked pumpkin pie, a honey-glazed turkey hot out of the oven — the smell of pure bliss.  But as you put on those joggers and prepare to gorge, some of us may be cursing the prices of this year’s festive feast.  At 10% to 15% more expensive than last year, you may want to this bit of reading material for the post-meal pit stop: the 21-link inflation field guide.

Expect to pay more for Thanksgiving this year. By one estimate, the cost of holiday dinner for 10 people is up 14% compared to last year.https://t.co/kQi9AXT6gY

Curiously, there are some who will be giving thanks this week because of those high prices. Not the supermarkets, nor the processors, nor the shippers.  No, those who will be giving thanks may just be calling it “Trendsgiving”.  Here was @taylorpearsonme from his October Trend Strategy write up following back to back months of 5%+ performance [past performance is not necessarily indicative of future results]:

While economists argue over whether it is “transitory” inflation, many commodity markets are busy pushing 30% to 130% higher on the year, in rather classic up trends. It won’t always be like this but the trend strategy will enjoy it while it does.

So, what do you need to know to talk intelligently at the dinner table when asked what sort of asset class/strategy does well during inflation. Here’s some trend following stuffing for your brain:

Trend following in its purest form is the process of recognizing and trading along with an up or down “trend” in a market. For example, buying and holding Oil during a 12-month move in Oil prices from $40/bl to $80/bl. Here’s what that looks like on an actual trend following model, via https://cib.societegenerale.com/fileadmin/indices_feeds/ti_screen/index.html, going long December 2, 2020 at around $41 and still holding long as we’re near $80. 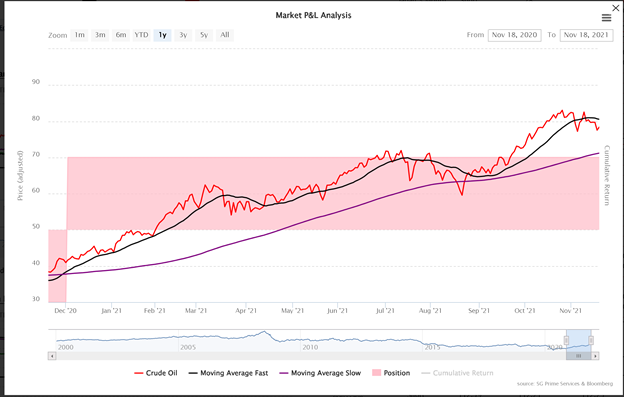 Now, you could grow old and gray waiting for a nice trend like this in any one market, so trend followers tend to cover many, many markets across geographies and sectors, like this from MutinyFunds: 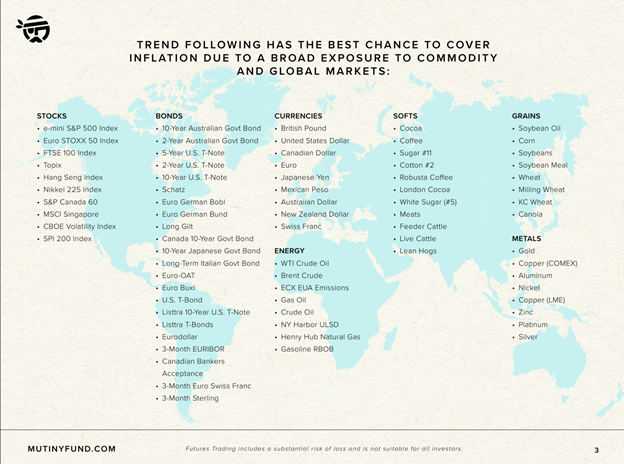 So, trend followers trade markets across the globe, patiently waiting for a trend (up or down) or two to emerge in markets as diverse as Cocoa, Aussie Bonds, Natural Gas, Copper, and Soybeans.

This allows them to be able to capture inflationary moves that may happen outside of energies or metals, as well as worldwide, multi-market commodity super cycles if and when they appear.  And because they don’t just look for up trends, but also down trends, trend following can offer positive performance in bear markets, especially if they are accompanied by a flight to safety in bonds.

So, why trend following??  Because:

As part of trendsgiving, we are happy to announce a refresh and update to our “Trend Following” whitepaper expanding on the above. Here’s what you can expect:

Now, we know you’re waiting with anticipation to download the whitepaper. However, it won’t be available for a couple of weeks, but what we can give is an exclusive sneak peek — get to know the Managers being highlighted in the new paper before it’s released:

“Back in the mid 80’s an old friend asked me if I wanted to go down to the Chicago Mercantile
Exchange where his brother-in-law worked. I’ll be honest, I was 21 and had absolutely no idea what went on at the CME. It turns out his brother-in-law (trading badge MAX) was one of the biggest local traders in the S&P 500 pit. We gained access to the floor and waited for him to exit the pit. Standing there for ten minutes I couldn’t believe the total chaos surrounding me. MAX finally came out of the pit looking like he was just in a fight. The three of us headed up to the Merc Club for lunch and for the first few minutes MAX just stared at his trading cards then back up at the quotes on the ticker board. During lunch we had a short conversation and then MAX said he had to get back to the pit but before he departed he looked across the table and said “John do you want to work for me?” I said yes and never looked back.”

Nigol is a well-known CTA, expert researcher, meditation and yoga practitioner, and Founder & CIO of $1.8 Billion in AUM = Quest Partners. Today’s guest is none other than Nigol Koulajian, he’s been in the business since the early 1990’s and has grown to become one of the leading voices in alternative investments.

And Now, a little Turtle Soup for your Trendsgiving…

Turtles?  What? It all started back in the 1980s, when two renowned traders – Richard Dennis and Bill Eckhardt – had a nature vs. nurture disagreement: were you born with the ability to trade, or is it something that can be taught. To test this theory, the two made the bet of the century.

The pair placed an innocent ad in the Wall Street Journal offering an opportunity that seemed too good to be true. Dennis would teach a select few his proprietary trading method and provide them with capital to trade. A famed trader spilling his secrets was astonishing enough, but in another unusual twist, the ad noted the pair’s willingness to take applications from anyone, including those with no prior experience in trading. The applicants that were chosen were eventually dubbed… the Turtle Traders.

From all of us at RCM Alternatives, we wish you a Happy Trendsgiving and hope you have a wonderful day celebrating all there is to be thankful for.