The Best and Worst Futures Markets of 2016

Twenty-sixteen is just about in the books, which means it’s our cue to draw some quick conclusions about the performance of the various commodity futures markets. Now that crude oil looks like it’s bottomed off from it’s multi-year decline, people are starting to get bullish on long-only commodity ETFs – with some even suggesting the rebirth of the commodity super cycle in 2017. Bloomberg had a nifty chart showing the three month and YTD performance of the different futures sectors, seen below, with the size of the circle representing the weight each of those sectors represent in the long-only commodity ETN, $DJP. 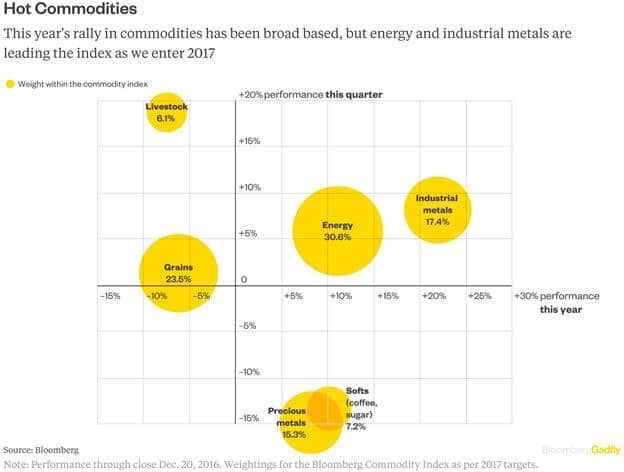 (Disclaimer: Past performance is not necessarily indicative of future results)
Chart Courtesy: Bloomberg

We’re not sure what the importance of the last quarter is for Bloomberg, here, but you’ll notice the energy markets and the industrial markets are the only markets able to log positive performance over the last quarter and last year, while all sectors besides livestock and grains were able to stay on the right side of that 0 line for the year. Interestingly, those two were positive performers in the 4th quarter, which led to some losses for systematic programs which had ridden their sell offs down until the Q4 reversal.  As for the weighting in the $DJP ETF, well you know we don’t think broad based long-only commodity ETFs are the best idea.

How about the individual markets?  If you break out the futures sectors into their own markets, there’s no doubt that most “commodity” futures markets  ended the year in the green. Here’s the 2016 performance of the 47 futures markets listed on our quote service of choice, Finviz.

[Please note – Finviz does some weird things around contract rolls, which can make their percentage gains over longer periods different than what would be found using a continuous contract or the cash/spot market, nonetheless, we feel it is fairly representative of each market’s 2016 movements]: 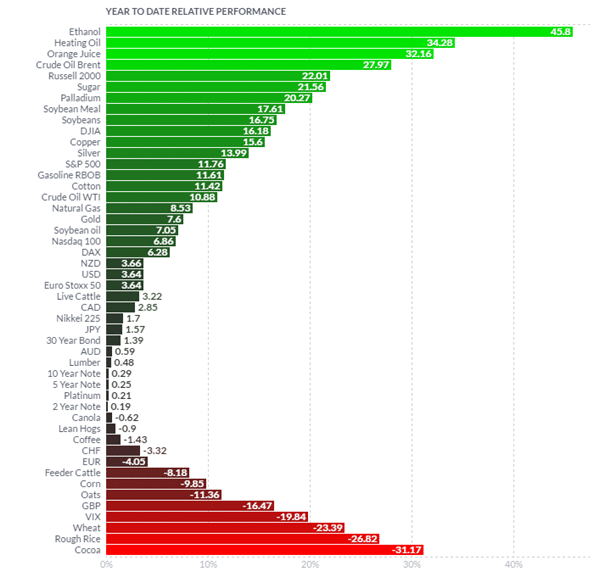 (Disclaimer: Past performance is not necessarily indicative of future performance)
Courtesy: Finviz

Observations on the 47 futures markets tracked by FinViz:

It’s important to remember that time is a social construct, and looking at the performance over the past “year” is just a way for people to benchmark performance when it doesn’t always need to be “benchmarked.” Trends don’t form based on what a market did last year, they form based on a plethora of supply/demand and potential geo-political events. The goal is to put yourself in a position to capture some of these moves in the most risk controlled way as possible. For instance, Brent crude was up 27% this year, and it seems everyone is talking about a further upward trend in 2017. Instead of guessing about the future price of oil, we would suggest checking out mangers who make profits when the price of oil moves up and down – or the 4 Managed Futures Managers on our list who could make money from a bounce in Crude Oil.

Cheers to 2017 – and the futures markets moving – no matter the direction!

P.S – Be on the lookout for our 2016 Strategy Review in the Managed Futures world in the coming weeks!