Back To Backwardation for Crude?

One quick look at the Crude oil market over the past five years – it’s easy to see the development of a $8-dollar range that’s made it tough for most energy traders (here’s the exception) to find returns.  We mentioned in our recent 2017 Outlook that the Oil market is poised for a breakout either higher or lower from this range…

And it looks like the direction most funds are betting on is higher, as Bloomberg reports:

“For the first time ever, hedge funds hold more than a billion barrels of bets that crude oil prices will rally.”

Indeed, there’s always more opportunity in long trends (prices can theoretically go up an infinite amount) than short trends (which have the zero bound). 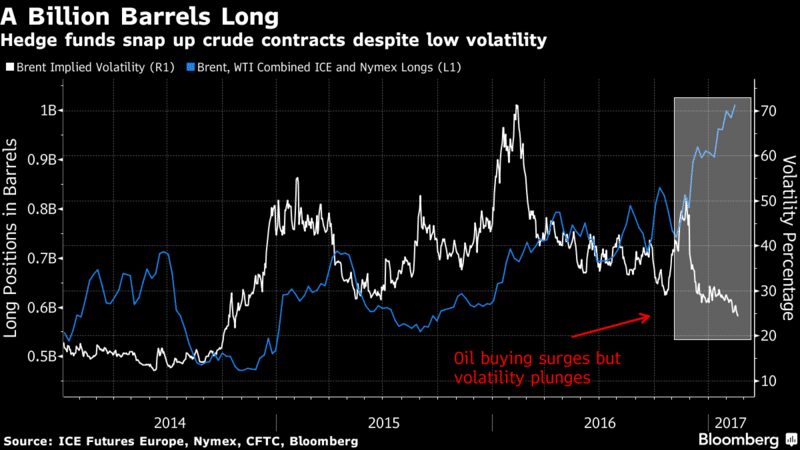 But while all these bets are piling up and Oil essentially goes nowhere, there’s another dynamic playing out worth watching. That’s the recent move of Oil into a slight backwardation, after years of Oil being in Contango (and even Super Contango, whatever that means, as dubbed by some reporters). Here’s Bloomberg again with the data: 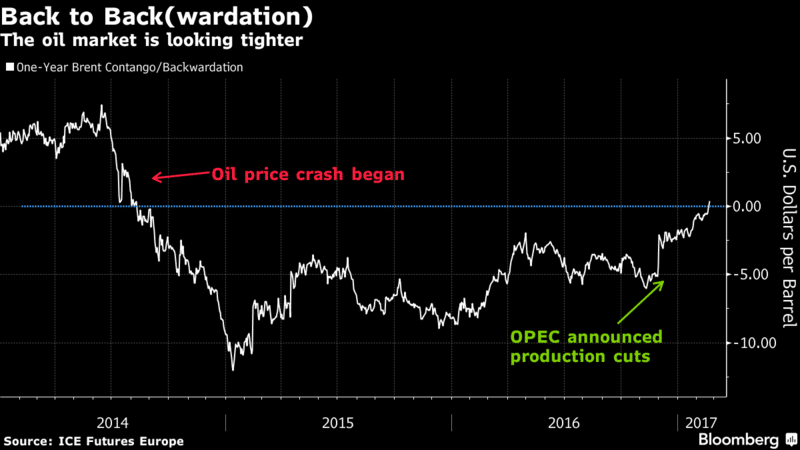 Now, in our opinion – Bloomberg is off quite a bit in saying this is “bullish signal.” They can look at the chart in their own piece to see that the last time Oil was in backwardation, it was actually a sell signal, not a bullish one. But the shape of the curve, in our opinion, has less to do with the future direction of prices (after all, the futures are pricing in what buyers and sellers are willing to trade Oil for future delivery at today) and more to do with opportunities outside of the direction of Oil prices.

For one, this is good news for all those hedge funds holding a Billion Barrels of Oil (its almost like they have smart people there looking at stuff like this), as the cost to hold that bet (the roll yield) is positive in a backwardation market. So they’ll essentially get paid for holding this bet if the price curve retains this shape. Similarly, the ETFs we rail on again and again for being such poor trackers of the commodity their tracking because of the roll yield cost they pay – will have less of that drag on performance.

But the traders really watching this are the delta-neutral spread traders, or relative value plays, who make bets on the shape of the price curve – not the direction of prices. A move like this to a flat curve could cause them great angst, as they won’t know which way the curve is likely to head from here – or could be just what the doctor ordered in terms of a new trend in which to take advantage of. Only time will tell how that plays out, but a backwardated market brings all sorts of interesting investments out into play.