What if we told you the chocolate bar sitting in your desk drawer has devalued -35% over the past year? Would you eat it now, worrying the cocoa derived bar is going to continue to lose it’s value, or save it for when it’s worth more than what you bought for it? Chances are, you don’t think about eating chocolate based on the price you paid at a Walgreens, but the recent change in the price of cocoa beans can’t be ignored.

This sort of move isn’t as outside the norm, as say, the oil markets. Or look back to cocoa in 2012 and you can see a similar downward move. But it’s not every day you hear of a market moving because of winds coming off the Sahara? Per CBNC:

The Harmattan season—marked by dry and dusty winds blowing from the Sahara—has been weak this season, and has so far not created much damage to cocoa crops,” said Singapore-based Phillip Futures soft commodities dealer, Wilfred Chong. “Instead, weather conditions are seen to be improving, fuelling the selloff.”

They are specifically referencing the Ivory Coast and Ghana, the two top cocoa bean producers (by a long shot), where there’s been such an abundance the beans are going into storage warehouses instead of a ships to be turned into chocolate. 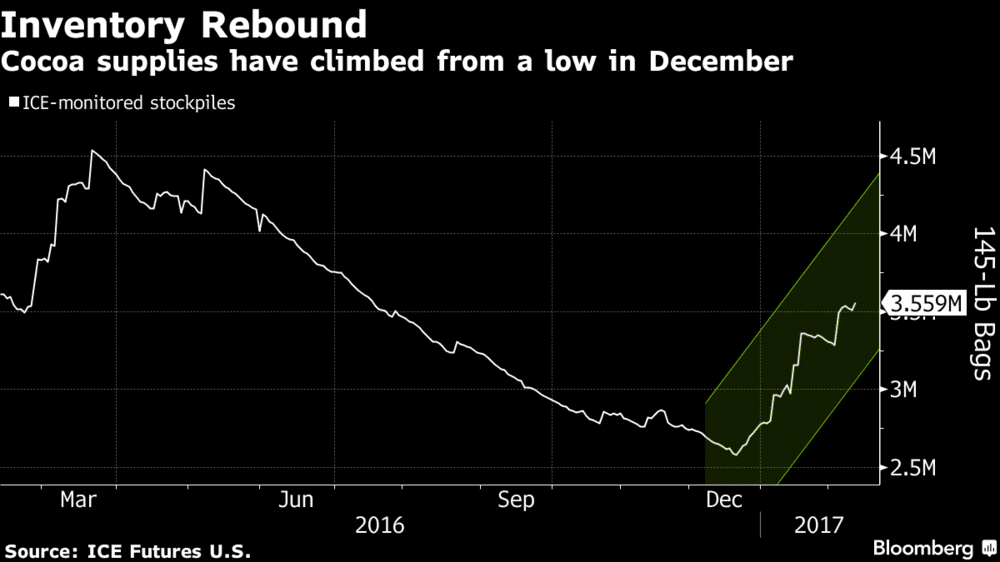 (Disclaimer: Past performance is not necessarily indicative of future results)
Source: Bloomberg

This has a ripple effect, as the exporters or companies transporting the commodity have defaulted on their cocoa contacts because they thought prices would be higher. Per Bloomberg:

Some local companies have defaulted on their contracts after wrongly speculating that prices would rise.

Shippers that couldn’t fulfill their commercial agreements will have to reimburse industry regulator Le Conseil du Cafe-Cacao if defaults resulted in losses, according to a copy of a letter obtained by Bloomberg and sent by the CCC to a company in default in recent weeks. The companies will lose access to Ivory Coast cocoa auctions until the compensation is paid. It’s not clear how many letters were sent and which companies received them.

Ivory Coast usually auctions about 80 percent of the bigger of two annual crops before the season starts in October.

October is still a little off, and there’s no way to be sure how much of the crops will be auctioned off by then, but if those companies don’t pay off their contracts we could see some weirdness in these markets – similar to when all of the Oil was stuck in Cushing a few years back without the means to get it out of there quickly enough to meet demand. Although something tells us they’ll figure out a way to get the beans sold and out of there, it being their largest export and all. For now, most cocoa traders (and trend followers) are jumping on this short Cocoa trade – with record negative bets on cocoa. 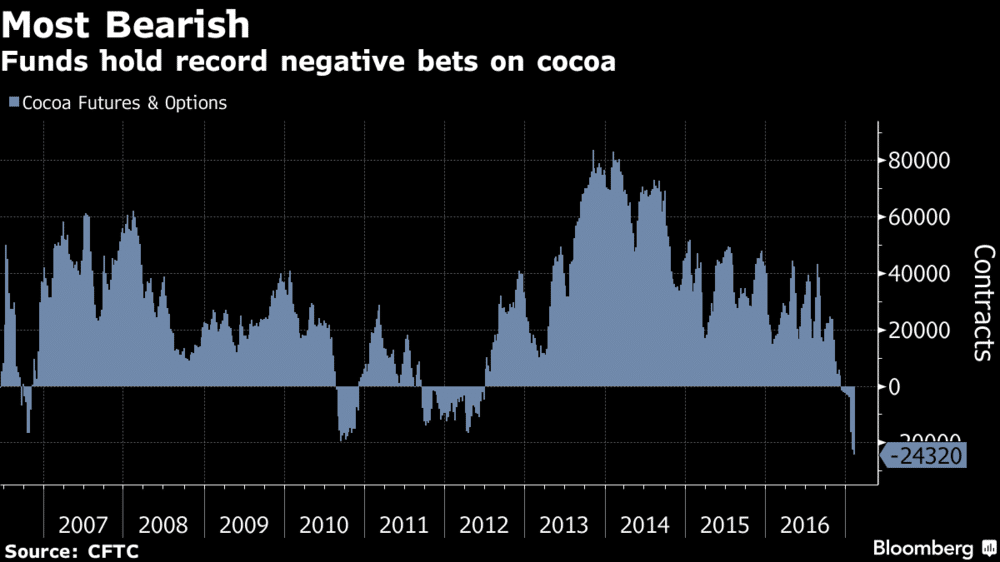 Money managers had a cocoa net-short position, or the difference between bets on a price decline and wagers on a rise, of 24,320 futures and options as of Feb. 7, according to figures from the U.S. Commodity Futures Trading Commission published three days later. That was the most bearish holding in the data, which starts in 2006. The funds have been negative since mid-December.

If this down move continues, managers in the space will certainly find some returns from it. Although it is rare for Cocoa to be a significant part of even commodity heavy portfolios. Gains here will help performance improve, but the asset class as a whole will need bond and currency moves to really pull out of their recent slump.  In the meantime, stocks/bonds/currencies – take a look over at the Cocoa chart to remember what a trend and directional volatility looks like. We could use some.