Crude Oil is Breaking Out

You may be forgiven for thinking trend following, volatility breakout trading strategies are dead…. It’s been a few years since they’ve delivered the goods, after all. But Managed Futures’ best monthly performance in 2017 happened recently, thanks in part to one of the  main commodity markets, Crude Oil, breaking out to the upside with WTI running up +15% over the past 30 days (Disclaimer: Past performance is not necessarily indicative of future results). Crude Oil has tried and tried and tried to break above its range to no avail, and all eyes are now on this move to see if it can get some legs.

Why’s it rallying?  Well, we turned to one of the smartest energy traders we know (and recent CTA Expo emerging manager Shark Tank winer), Brent Belote, to get some insight. His program is up 3.70% on the year (past performance is not necessarily indicative of future results):

The crude oil market continues to be bullish led by rising geopolitical tensions and strong product demand.  DOE stats this week showed the highest weekly demand for distillates in 5 years for this time of the year.  The global economy continues to exhibit robust oil demand, and 2018 is forecasting to be higher yoy growth than 2017.  The big elephant in the room is the OPEC meeting at the end of the month.  We believe that OPEC will extend the cuts to their next meeting in the second quarter of 2018 but will not extend for the full year as some analysts are forecasting.  They will opt to re-evaluate in 2018 as a lot can change in the next six months so they will keep all options open until then.

Then there’s the whole Game of Thrones like plot line shaking out in Saudi Arabia, with the suspicious death of a Saudi prince and seven other high rankings offices dying in a  helicopter crash hours after one of the princes ordered the detention of 30 rulers, that are currently being detained in the five star Ritz-Carlton. All this is to say, it’s causing some concern for what that means for their oil supply.

But ignoring demand and juicy details, it appears WTI crude is showing signs of a potential long-term up-trend. Exhibit A: The Golden Cross (When the 50-day Moving Average moves above the 200-day moving Average). 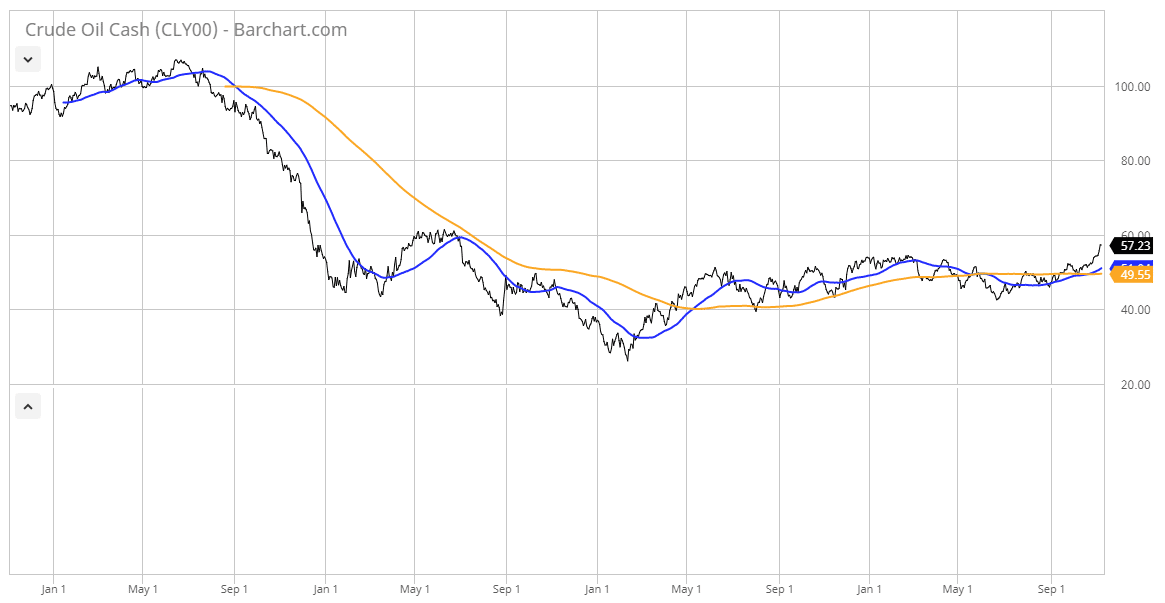 This is a textbook momentum trading strategy (albeit a simplistic one) for trending following traders that an uptrend has begun. The 50 day moving average was above the 200 MA back in May 2016 with oil around $40, preluding a run (albeit a choppy one) of about $12 higher.  Still, it didn’t seem like much of a breakout to many, with Oil remaining in the $40s for the bulk of that time. Is this time any different? Well, we’ll leave the fundamental stuff up to pros like Cayler.

But from a technical standpoint, this time sure does look different, with several other technical metrics signaling a new up trend. First up, the classic trend follower Bollinger Bands breakout. Bollinger Bands bracket the market a few standard deviations above and below the average price over the past xx periods.  In this example, we used the standard 80-day average. The classic trend following trade is to go long on the open following that breakout, and risk down to the moving average of prices. WTI broke above the 80 day Bollinger band on November 2nd. 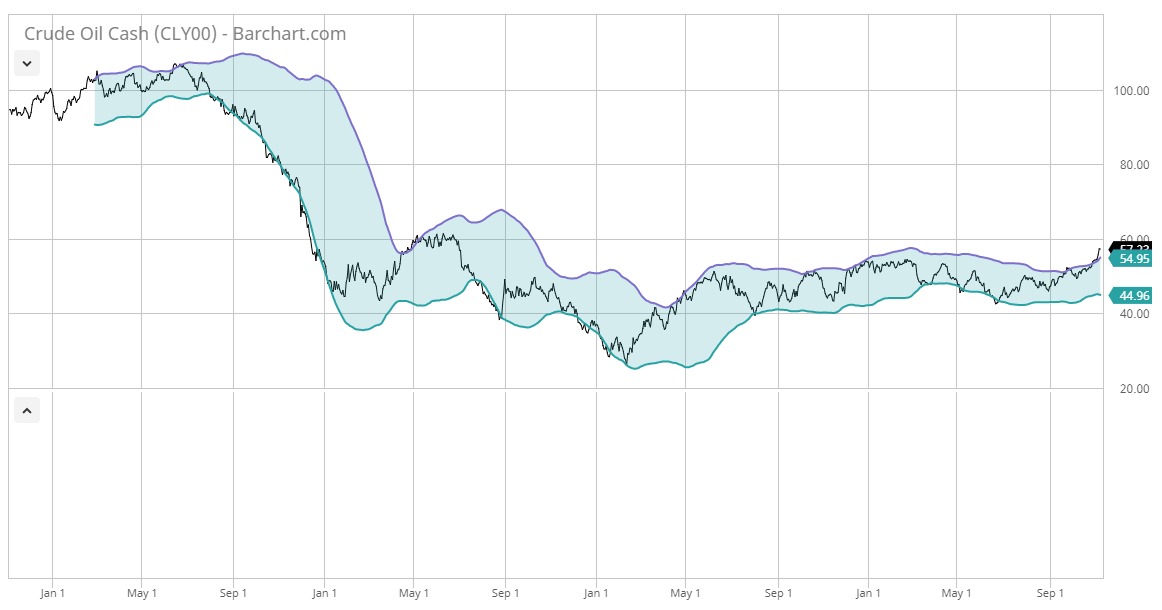 There have been past breakouts of the upper Bollinger band, notably back near that last golden cross to the upside. But this one has a unique factor, in that the longer term (200 day) ROC (rate of change) has also recently gone positive. The last time it was negative, signaling to many programs that it wasn’t a breakout to be trusted, happening within a longer term down move.  Finally, you have this breakout representing a new high on weekly, monthly, and even annual charts; another metric used by systematic trend following programs to signal the beginning of an up trend.

Only time will tell if this breakout is the one energy traders, systematic and discretionary alike, but especially systematic ones… have been waiting for. But multiple signals lining up together surely mean this will be a popular trade amongst multi-market systematic trend following programs. Now, if they can just get a repeat (but in reverse) of the 2014 move, we’re likely to see some performance contributions.