Looks like CNBC wants you to know the S&P 500 just hit a new all time high. Time to break out the Dow 30,000 hats and pics of Leo playing the Wolf of Wall Street. 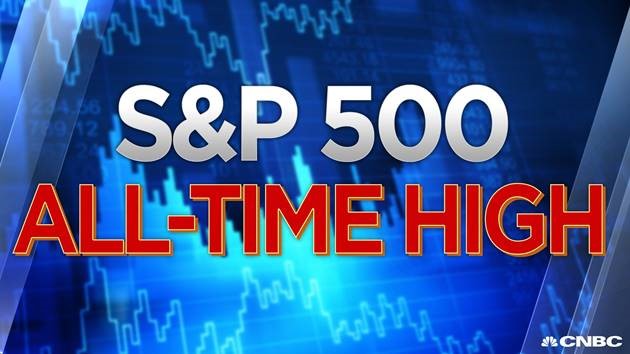 But why is this really news anymore. We closed at a record high 62 times in 2017, and the bull market turns 3,453 days old on Wednesday, which would make it the longest on record by most definitions, according to CNBC. Maybe because we hadn’t been up in this range since January of this year, before the big sell off and VIX spike.  It has been a whopping 207 days between highs, a rarity over those 3,400+ days of up market.

But while everyone else is evaluating the valuations of the stock market itself, we’re looking at things a bit differently – and analyzing how far the diversifier (alternatives) has been outrun by the stocks (the thing needing diversifying from. There’ll surely be no shortage of articles (here’s one early adopter below) this week saying how hedge funds are trailing the stock market YTD, despite that being an apple and oranges comparison thanks to that not being what the hedge funds are designed to do.

Goldman: “The average equity hedge fund has posted a YTD return of -1%.”

We’re interested in analyzing how the S&P 500 is performing relative to alternatives like hedge funds and managed futures. Here’s the raw data, which doesn’t look so good for the alts:

But when you look at that same data from the standpoint of risk, with an underwater equity curve, you can see that the stock market (SPY) has had much deeper drawdowns equaling much more risk. Those outsized returns don’t come for free!

Which begs the question, of what they look like when risk normalized. We often approach that concept from the standpoint of bringing stocks down to equal the volatility of alternatives (yes, alts like hedge funds are, on average, less volatile than stocks). But what if we instead look at bringing hedge fund up to equal stock market volatility. We looked at a rolling three month volatility comparison between the hedge fund index and S&P 500, and found the stock market index to be about 2.89 times more volatile than the hedge fund index. Again, that’s the idea with hedge funds – their trying to control risk and not be blindly long equity beta. Here’s what the past 10 years look like when normalizing the volatility between the two indices by multiplying hedge fund returns by the rolling 36 month ratio between stock index and hedge fund index returns. 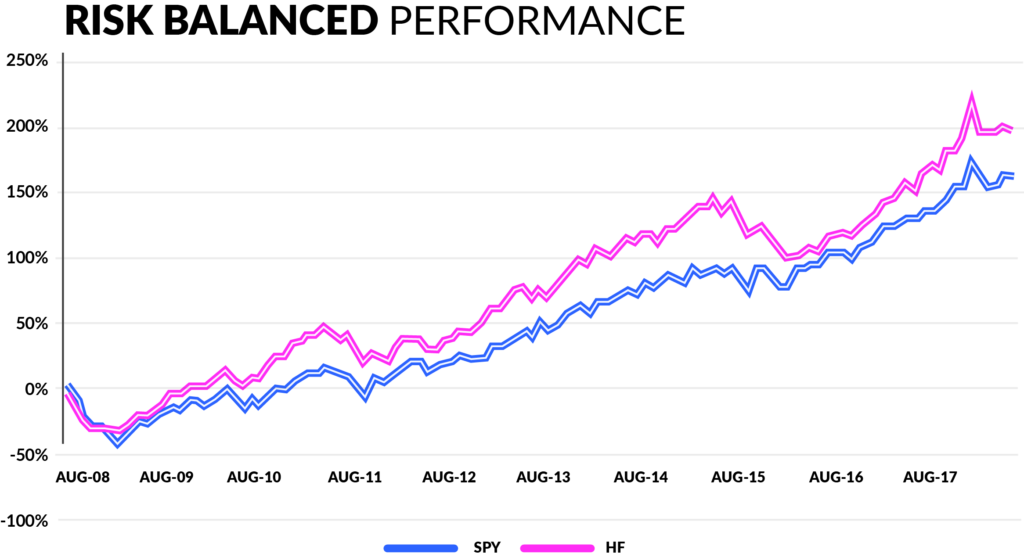 And that’s why there’s $3 trillion dollars invested in hedge funds. It’s not about the headline number or absolute performance compared to stock indices. Hedge funds are given mandates and expected to exist within tight drawdown and volatility bands by investors. They are employed for specific purposes and mandates which involve much more than just return – and generally speaking – are way more concerned with controlling risk. Scratch that. It’s not just controlling risk, It’s about delivering an expected risk. That’s something a passive investment in the stock market can’t do. We can’t ask the S&P to just give us a 10 vol next year. But alternatives can and do.  For one, that allows the investor to set the risk to whatever they are comfortable with, via notional funding of a managed account, or portable alpha mechanisms, or levered share classes.

So go ahead and celebrate the stock market’s new record! That rising tide will lift a lot of boats, to be sure. But don’t shed a tear for hedge funds trailing behind. You’ll note on both the raw data and risk adjusted graph, they’re essentially at their own all time high. And somewhere, probably on a group like Renaissance’s internal comms network or something, there’s a screen like CNBC’s saying something like:        Special Report: Hedge Fund X delivers its target VOL, while keeping max drawdown below the investor’s punch out level, while returning more than the 5 year note.