Those in the alternative investment space have long trumpeted the power of alternative investments (and particularly managed futures) to perform in a stock market crisis (see our evidence of that here and here). There’s no doubting that managed futures have performed during past crisis periods, but as the disclaimer says – past performance is not necessarily indicative of future results – and we are looking at a lot of red for managed futures this month. You have bellwethers such as AQR down about -4% from their highs in early October, and the ScoGen CTA index having put in a new five year low point (yikes), down nearly -7% on the year.

So where is the crisis period performance? What gives?

Well, as always – the devil is in the details. You see, when we talk about crisis period performance for managed futures, we’re talking about periods longer than a single day, week, or even month. We’re talking about periods in which traditional investments see major shifts (2007 to 2008 is the classic example, when stocks and commodities fell over several months). You see, crisis periods have two parts.  One is the crisis itself, which usually causes a reversal of the current market trend (in this case current trend was stocks, foreign currencies, and energies up; bonds and US Dollar down). The second part is the aftermath of the crisis in which new market conditions and trends emerge.

Managed futures generally outperform during the second part of the crisis, and under perform during the first part. We need look no further than  2008 for evidence of how managed futures and macro react to shifts in market, where commodities saw a sharp reversal off of all-time highs, causing pain for managed futures from July through September, before the aftermath portion of the crisis kicked in through October, November, and December. [Past performance is not necessarily indicative of future results] 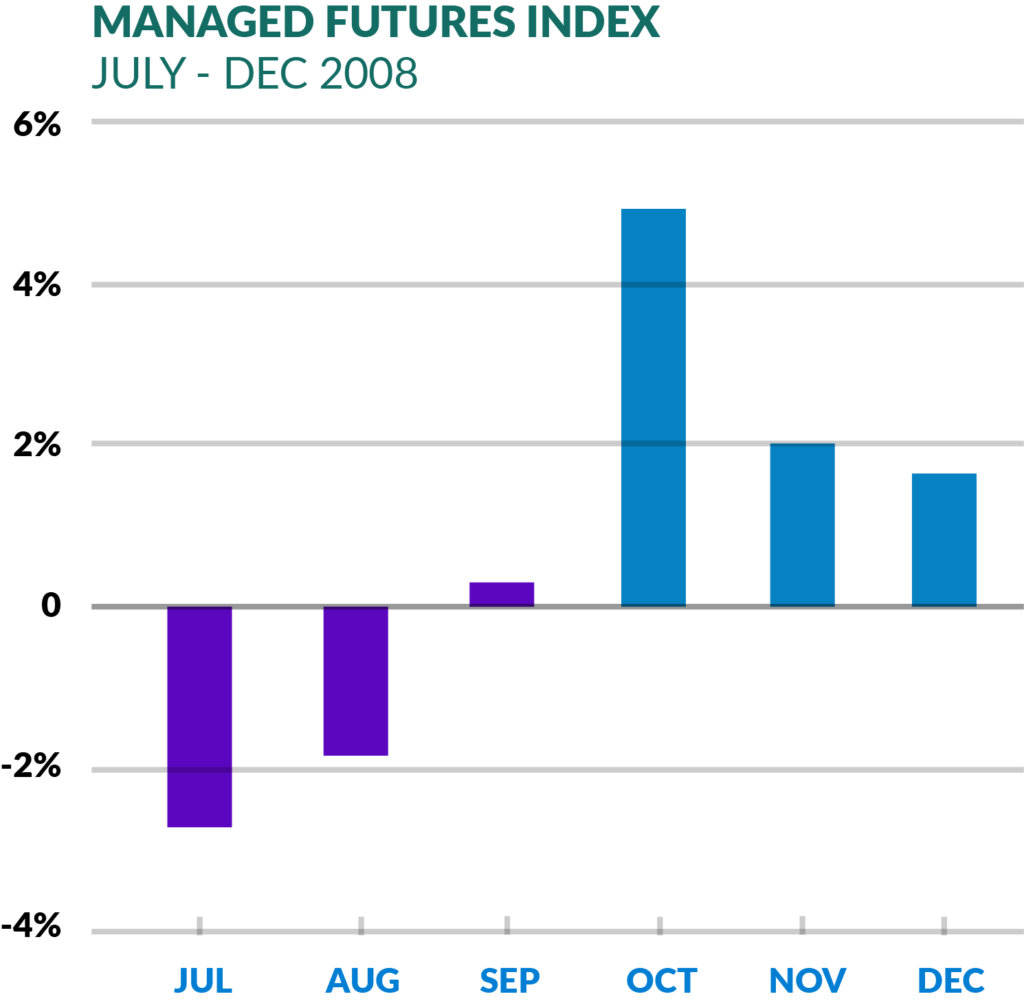 The problem for alternatives back in February was that there was no second part of the crisis. There was a vol spike and -10% correction in stocks, but it dissipated just as quickly as it appeared, eventually giving way to the regular scheduled programming of the slow crawl upwards. And the problem for alternatives now, is that we’re only in the first part of the crisis, yet to know whether there will be a second part. The problem for alternative investments like managed futures in both cases is that the existing trend most were involved in was UP, with recent multi-year highs in stocks as well as lows in bonds. Here’s what the side by side performance for managed futures has looked like in the initial stages of each sell off:

Why did they essentially mirror stock market performance when they are a non-correlated investment? Isn’t this what we have them sitting around for – to perform during a down move in US stocks?

A few ideas there. One, there was a clear up trend in stocks (and down trend in bonds) coming into both February and this October correction. Trend following models are designed to capture such trends across asset classes (including, for sure, stock indices and bonds). And there was a clear reversal of that trend. But, as we can see with a look at a simple 50 day/200 day moving average cross over trend following setup on the S&P 500, the signal of a down trend in the S&P was well after the bulk of the move had happened. And this is a rather quick trend following signal, using just 20 days and 50 days, whereas some managers may be out much further at 100 and 200 days. The result – these programs were slow to reverse to the down side, given the quickness of the move in relation to how slowly prices had risen before hand. 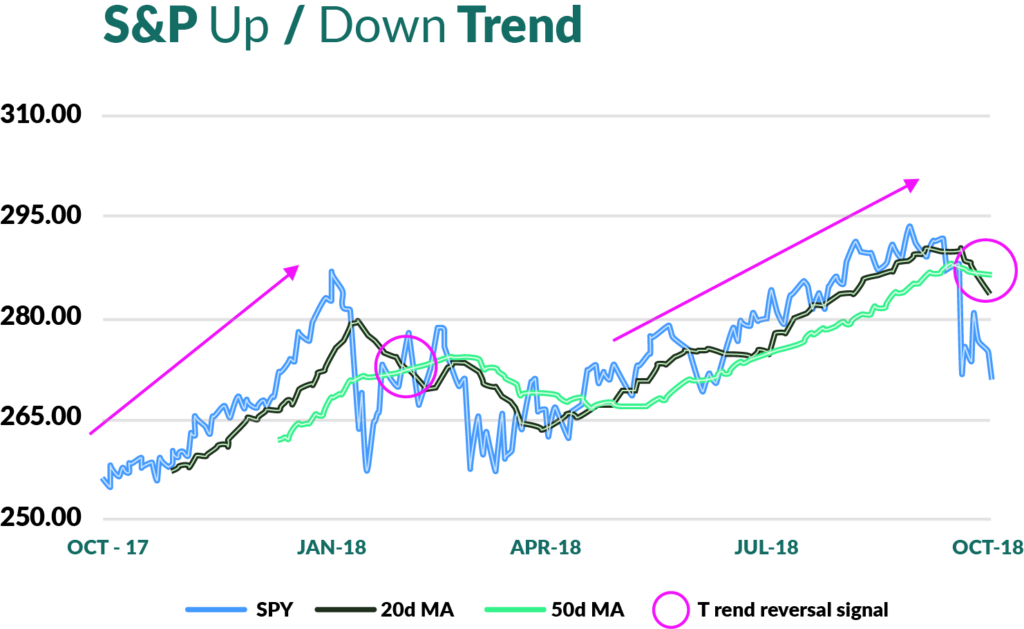 What’s more, some of this slowness to react may be intentional. We mentioned in our 2018 Managed Futures Outlook to beware the managed futures programs who may have ‘cheated’ a bit over the past few years by adding more short vol and long equity exposure, in a sort of ‘if you can’t beat ‘em, join ‘em’ mentality; and some of that could be going on here. The last thing you wanted to do in the stock market sell offs the past few years was get out of your long position. The sell offs were short lived and quickly reversed, teaching any manager (or machine using AI) that it is better to space out exits and not do a knee jerk reaction to down moves. It’s more than possible that the resulting performance profile has become capturing more stock downside than managed futures and macro programs may have in the past, as well as delaying signaling a down trend.

So we were up at one of those positive correlation peaks before this market sell off. That’s bad news. The good news, if markets keep going lower, we won’t remain there for long, with models reversing and taking on short positions as correlations move into negative territory. For now, this sure seems like a bit more of a real down move than previous times during the now 10yr old bull market run. 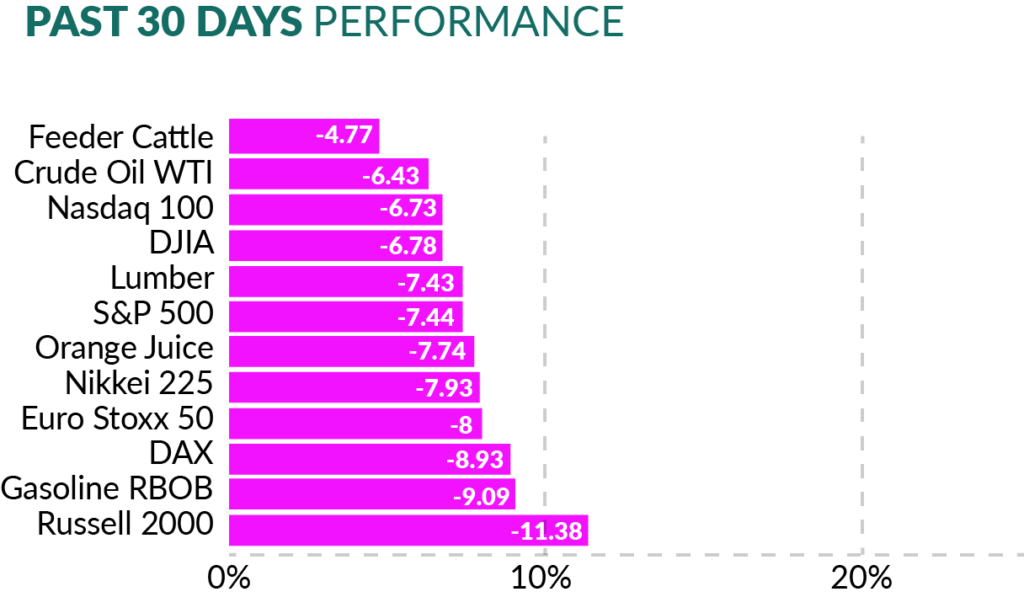