Here’s how 33 markets performed since the 2009 low

For long-time CNBC watchers, you no doubt remember the now deceased Mark Haynes saying 10 years ago, on the morning of March 10th 2009, that it felt like a bottom and that he thought this rally had legs. It didn’t hurt that the S&P 500 put in a devilish low of 666 the day before. There’s no telling what could have happened if that had been breached. All of a sudden, there it was: an up month of 8.5% in March 2009, Q2 of 2009 clocking in at +15%, and gains of +26% for 2009 overall. What had started as a curiosity was suddenly a full blown rally in U.S. Stocks.

And it didn’t stop there – it actually picked up steam, and here we are 10 years later with global stock indices up between 200% and 600% since then (on the back of Amazonian sized gains), and nary a correction or volatility spike to speak of (outside of last year). Wow – why didn’t Bernanke just come out and tell Americans to buy stocks, on margin, on March 9th – and guarantee against any losses…Or maybe that’s what he did do to those who were listening.

But that’s just the stock market. There’s other markets like crude oil, and corn, and coffee. Not to mention the VIX, and something which was nothing more than a speck in Satoshi’s eye in 2009 – bitcoin. Just how have all these other markets performed since the fateful March 09, 2009 low in equity markets? Glad you asked: 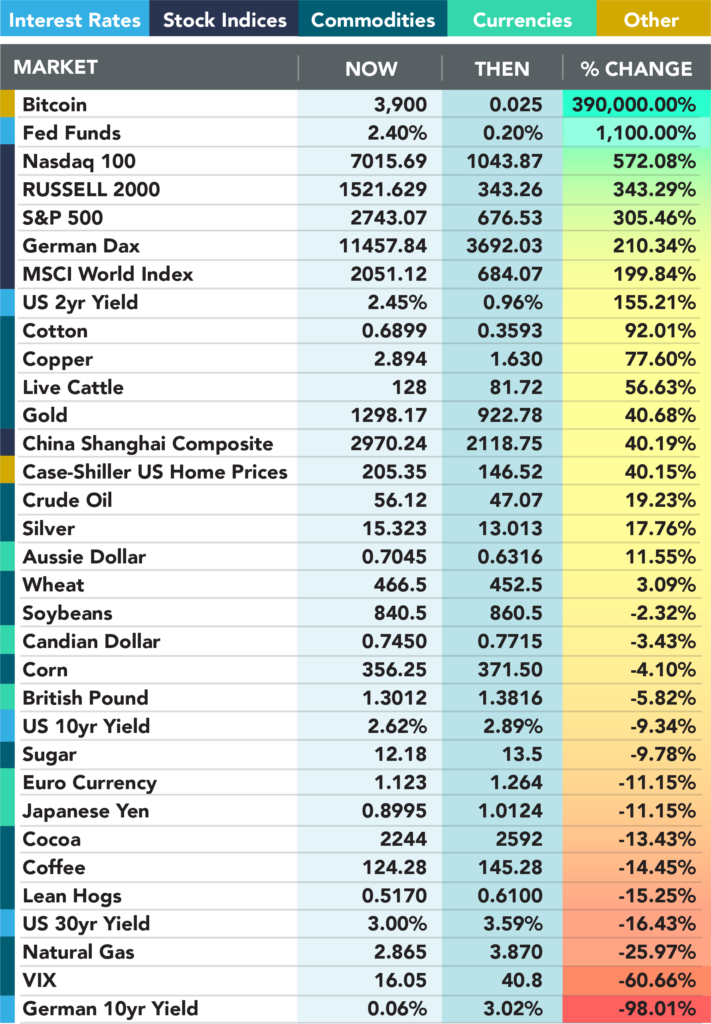 Some items of note include bitcoin gaining 390 thousand%, going from sub $1 per coin to $3,900 per bitcoin.Copper outpacing gold almost 2 to 1… (funny we don’t recall any stories about Copper vending machines over the past 10 years); German bond yields losing nearly their entire yield (literally going to zero), the VIX down more than half (after spending much of the 10 year period down by more than 75%) and a whole lot of nothing (-20% to +20%) for major commodity markets like oil, corn, wheat, and soybeans.

Here’s to those who had the right setup in their portfolios the last 10 years.One thing is for certain, this list isn’t likely to look like this 10 years from now.