Book Review – Thinking in Bets: Making Smarter Decisions When You Don’t Have All the Facts

Man, were we excited to pick up Annie Duke’s book on game theory and how she approaches life (and poker) by thinking in bets. 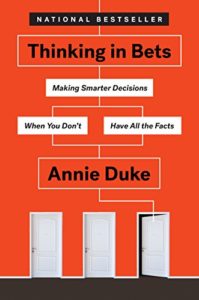 Thinking in Bets: Making Smarter Decisions When You Don’t Have All the Facts

After all, that’s what a good alternative investment strategy does. It “thinks” in terms of an asymmetric payoff, where the reward is more than the risk. That sounds like just the sort of thing we were likely to read about in ‘Thinking in Bets’, where the reader could learn how to identify and get value our of different life situations by viewing them as so called bets and acting on them.

But… we’re sorry to say the overall impression of the book was just sort of….meh. The poker, probabilities, and investment corollaries should have abounded, but in the end those types of tie-ins were sort of weak and there didn’t seem to be a main theme beyond the concept that the world isn’t black and white, so make decisions based on that reality, assigning likelihoods of events happening. The book could probably have been called ‘thinking in probabilities, as it delves into the fact that even when we know…we don’t really know. She gives the interesting example of more than a third of 187 species declared extinct the past 500 years having been rediscovered? Species having been found ‘un-extinct’ in recent times, and says it would be better to say I’m 87% sure this species is extinct. But, as we’ve covered before – humans have a hard time understanding probabilities.

Still, the book wasn’t without some highlights.

There was the witticism that “Life is poker, not chess” ringing true, especially if edited to read “markets are poker, no chess”.  Another way to say that would be, “the market is a bonfire, not a clockwork machine”.  Annie explains that chess is purely mathematical, with a calculable route to victory (or a draw) always there to be calculated. Of course, you need to be a super computer or chess grand master to be able to sort through all those tens of thousand of possible combinations of moves to arrive at the right one to play given any one set of circumstances. But there is always a right choice. In contrast, poker has random elements in that there are unknowns still be uncovered throughout the hand in the new cards revealed and the hidden cards in your opponent’s hands. She expounds that once we realize life is poker, not chess – we can better frame the range of possibilities of certain outcomes and be better prepared to handle all of life’s vagaries. In market speak, knowing markets are poker, and not chess – can help us better understand that success isn’t black or white. We can have a 65% chance of making money on a trade, yet still lose. That doesn’t mean the trade logic or approach was flawed. It only means we got the short side of the odds. Played out another 100 times, we should win on 65 of them.

That leads into another interesting concept in the book, what she calls “Resulting.” She sees this as a very bad and dangerous thing in poker and life, and explains “resulting” as the times when we think we did well or did poorly based solely on the result. The problem, of course, in basing your financial or emotional well being on just the result is that we then give too much credence to the role of luck in the outcome. Despite the old saying that it is better to be lucky than good, Duke points out that the most successful professional poker players concentrate on being good rather than lucky. They know that the luck part will come and go, and try and separate that out from their thinking as much as possible to concentrate on their process and making the right percentage bets when the time comes. The tie in here to investments should be obvious, where all too many investors get caught up in deciding on a portion of their portfolio based on the past day, week, month, or year of performance. We call it chasing returns in our business. In poker they call it “Resulting”. In both realms, it results in the inevitable downward P&L cycle of getting in at the tops and out at the bottoms.

Two more worthwhile sections were the discussion of “Premortems” when thinking in bets, which is basically thinking ahead of how this could go wrong. In poker, that’s thinking ahead into the future and what you will do if you raise and such and such cards come out and the next person raises. In investments, it’s understanding how an investment model or strategy “breaks” before investing by considering what sort of market environment or confluence of events has to transpire in order for the model to blow up. She calls this thoroughly ignorant in another section, where you have to know what the known unknowns are, and make sure you are getting paid for that unknown risk when thinking in bets.

Finally, the discussion of group think and the bias built into groups had us thinking of multi-strategy models which are in effect, a group think on which positions should be in a portfolio. She brings up some research showing that peer reviews were only 52% accurate due to group think, but that it increased to 71% accurate when the peer review was done through a betting market instead of just yes/no. When the peers had to wager how right they thought the research was, they were much more accurate. Many flavors of systematic quant strategies have this, with what accounts to a betting market within the strategy, either by probability of success or increased position size when finding increased probability of success. In short, there may be a bias (unintentional or intentional) within a single model, so why not let 10 models, 100 models, or 1000 models virtually wager on the trade, and place the trade that receives the most “bets” to smooth out any bias issues.

P.S. – one of the best lines of the book wasn’t from Duke, but her quoting Jean Cousteau (related to Jacques?) saying “We have to believe in luck, how else can we explain the success of those we don’t like.” 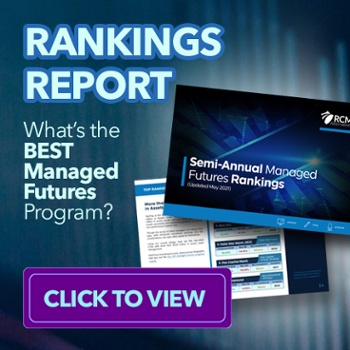