Election Volatility is Here and Most Intense Than Ever

October is a historically volatile month (see Oct 08, Oct 87), and the VIX tends to peak in the month, “jumping to [a level of] more than 21… on average over the past 30 years” (CNBC), where we even get the so called October effect or Mark Twain effect. And this October is a particularly interesting month of market fear because not only is it election year – it’s an election involving one of our most volatile U.S. President’s of all time – a certain Trump.

Here’s what that October weirdness looks like in the VIX Futures term structure (simply a plot of each futures contract month’s price, via vixcentral.com), with the market in steep contango going into the October expiration, and then reverting to backwardation from that month onward – although the entire curve is higher than the front month and current spot prices. 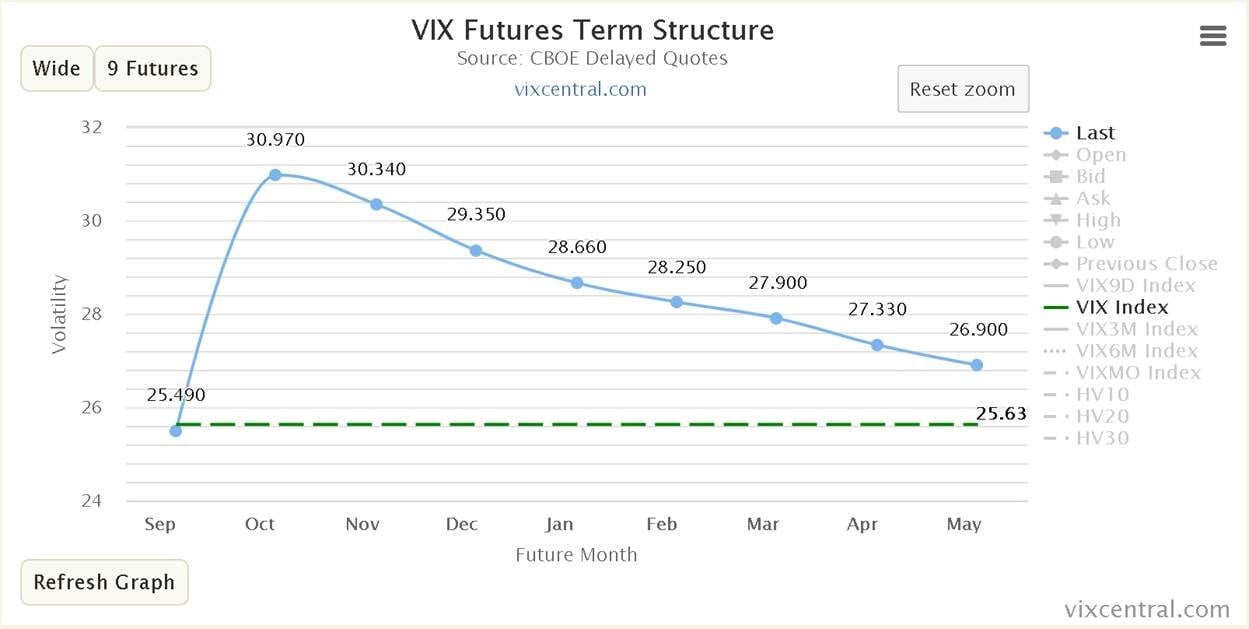 Why October?
First, why is VIX higher in October? Isn’t the election in November? It surely is, but the VIX is designed to measure the expected volatility of the S&P 500 over the next 30 days, as reflected in option prices looking out between 27 and 34 days.

So, it is reflecting people pricing in higher volatility over the election period. BUT,  if you’re trading the actual election itself, the November VIX futures will be the only thing you can trade – the October contract will have stopped trading. So while the October futures do cover the election period, you can be sure there will be those placing their bets in the November futures as well when the time comes.

A Contested Election?
This all makes some sense. There’s an election. There’s uncertainty about whether Democrats in the U.S. take the Presidency, the Senate, and more all the way down through state races. A lot of changes in leadership can cause new rules, new regulations, etc. – which can impact company earnings and therefore stock prices. That’s all rather textbook.

What isn’t so textbook, is the idea that this more than usual increase in forward volatility is also due in some part to the possibility of a contested election. Yes, here in the United States of America where we invented the concept of elections not being contested.

Here was Matt Thompson on our recent podcast covering the current Vol environment:

…everything kind of centers around that October contract. The October VIX contract looks 30 days forward – that covers the election volatility….after October you get this big slow back down. It’s obvious that the market is pricing in some volatility around the election. Look at it, you’re 28 today in the March contract into next spring, so that VIX market is looking at major volatility around the election that persists for a long time. Some of these scenarios people are drawing up where we’re not going to have a clear [presidential] winner for who knows how long. And that seems to be what’s being priced in right now.” (Matt Thompson)

Now, we argued there’s also some pandemic/vaccine/etc. lasting vol or vol echo from March, but it is for sure interesting. So interesting, that one of the kings of Vol himself, Chris Cole of Artemis Capital Management, weighed in via (Twitter). Now, Chris is saying the same thing about a contested election – but in a very different way. He’s arguing that the prospect of a prolonged, contested election is NOT priced in.

“Vol markets value the U.S. election as a massive binary risk event that occurs at one point-in-time (like earnings in a stock). The real risk is a contested election and US constitutional crisis that occurs throughout time. If the latter comes to pass, forward vol is very mispriced.” (Twitter) 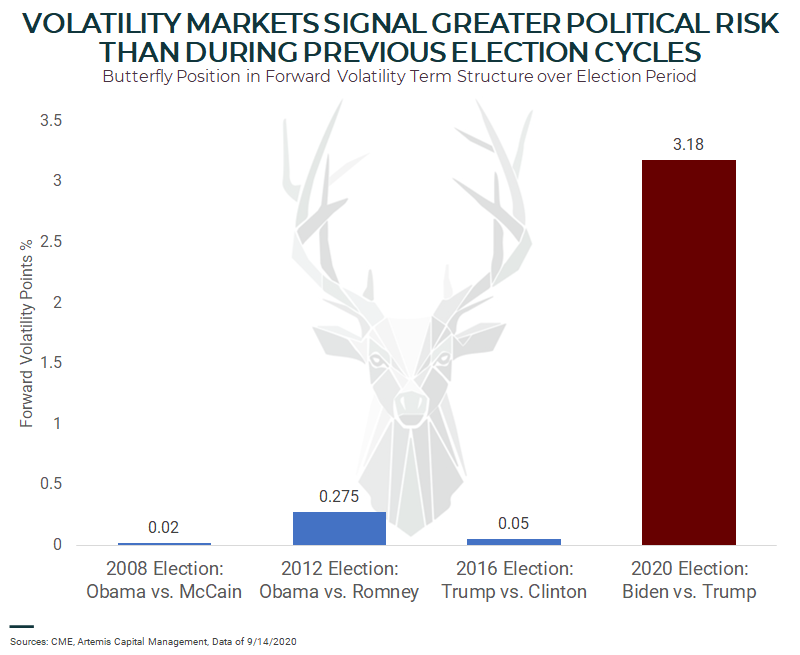 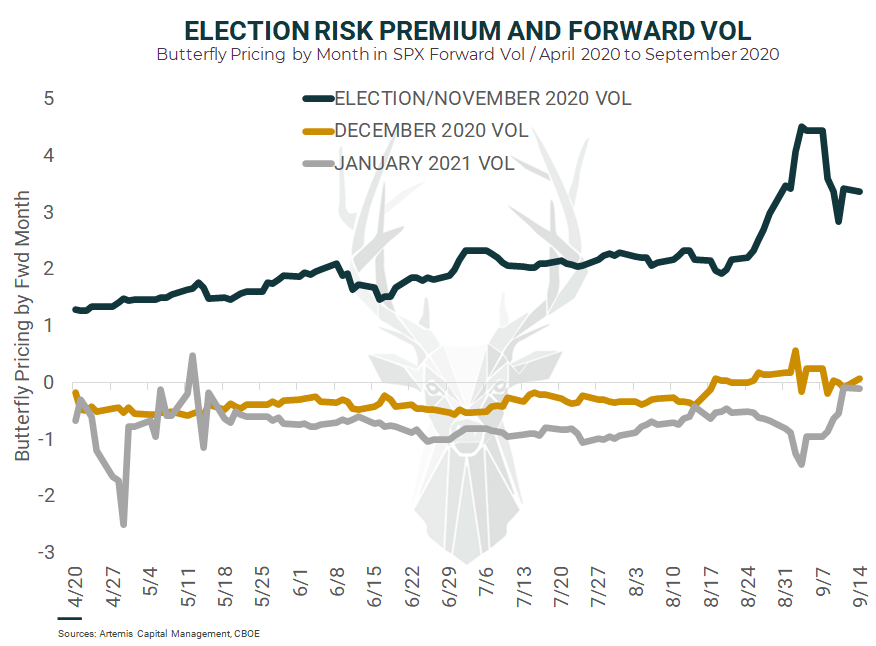 Is the probability of a contested election properly priced in? Who knows. Only time will tell, and only the degree and length of any such contesting will tell. Our bet is that most all of it is priced into October, and then some of it priced into the back months as a bit of a hedge.

Speaking of Binary Events
We talked about being “beware of binary events” in our 2020 MF Outlook – specifically why politics and systematic trading don’t mix.  So, we hope it isn’t some sharp whipsaw move the other direction based on the election results, as that’s particularly not good for systematic strategies. Systematic trading relies on defined rules and extended shifts to new paradigms. This election season is shaping up to be the ultimate black swan event – except for the fact that you know it’s coming, so more of a Gray Rhino. Talk about a systematic trader tease of the highest proportion. There’s no way to write in rules for a November election that could drag into ??/??/2021. Here’s how we put it in the 2020 Outlook:

The run up [to an election or new law vote] is about investors positioning their portfolios for what may come. It’s people lightening up on exposure, adding safety, and so forth. When enough people do that sort of thing at the same time – you get a mini rush for the exits that can push prices in a certain direction for a certain amount of time. What we in the business call a trend, or momentum. We love these – they’re measurable, cyclical, capturable.

But, what happens on the day the vote is tallied is something different altogether. The vote itself is a binary event. It either passes or it doesn’t. If it passes, x, y and z happen in markets. If it doesn’t, a, b, and c happen in markets. You may be familiar with another popular binary event, the coin flip. Heads – you win, Tails – you lose. Suffice to say that the guys and girls with PhDs and sophisticated algorithms for tracking market prices and identifying patterns don’t quite like their life’s work boiling down to a coin flip.  These binary events and resulting short term moves can temporarily invalidate all of the math and research which go into the modern day systematic global macro or managed futures program.

Election volatility is not a new concept – but how exactly that volatility plays out is going to swing trades one way or the other. Binary or not – this could be something of history in the making.