Has there ever been a better time to be an individual trader, or retail trader as they are sometimes condescendingly called in the professional trading industry. What with Dave Portnoy (DDTG) saying (correctly for now) that stocks only go higher, or Robinhood forcing nearly all brokerages to offer commission free trades for stocks and fractional shares.

Business Insider estimates that nearly 25% of the stock market volume is driven by retail investors. That’s about double what it was 10 years ago and reminding people of the good old dot.com boom days.

Individual investors made up just 10% of the market’s trades in 2019. That share then crept to 15% as popular brokerages including E-Trade, TDAmeritrade, and Charles Schwab erased their commission fees and lowered the barrier to entry for casual traders, Mecane said. (Business Insider) 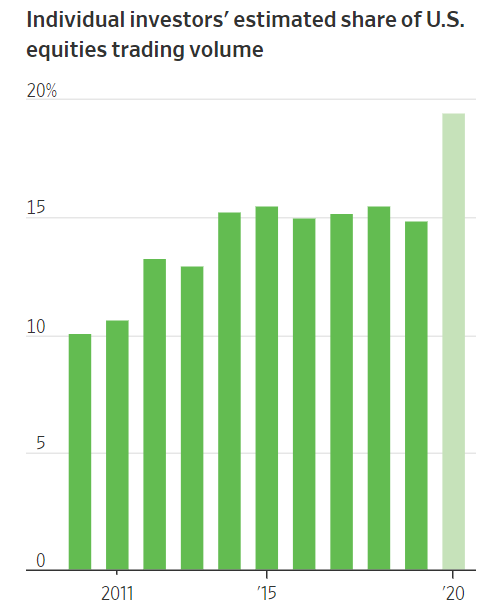 Perhaps it is this renaissance of the retail trader that is driving equities higher. It sure looks like it when we see two of the biggest companies in the world jumping in value after they split their stock (something, which economically speaking, doesn’t create or remove value – being that you get more shares at a lower price for the same total value) We’re talking Tesla and Apple, of course. Per the WSJ:

This doesn’t make a lot of sense. If you can already purchase fractional shares, then why is a lower priced $TSLA more attractive?  Maybe because you can then afford some options on them?

Our friends at the futures exchanges are surely noticing this trend…

We previously wrote about The Ice’s FAANG+ which includes the original Facebook, Apple, Amazon, Netflix, Google and tacks on Alibaba, Baidu, Nvidia, Tesla, and Twitter. That was just two months ago and The Ice has come out again with new contract sizes coming out, using a direct quote

September 28, the NYSE FANG+™ futures contract size will be reduced to $5 times the NYSE FANG+™ Index. This lower increases opportunity and provides a retail friendly solution.” 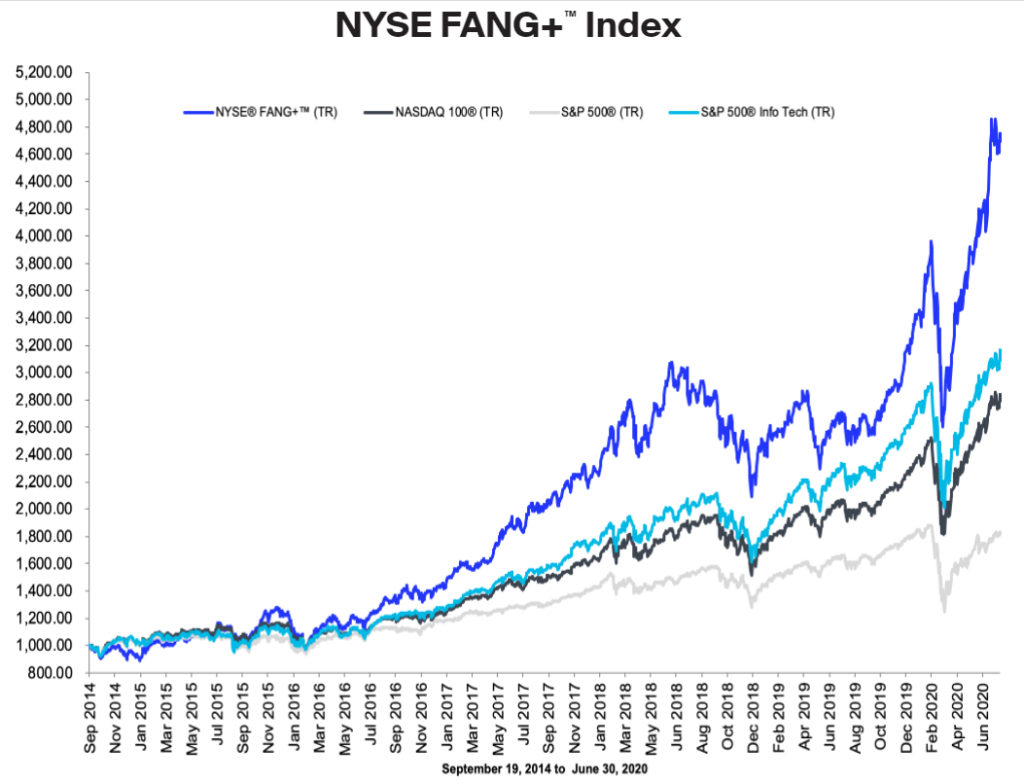 And ICE isn’t the only exchange flipping the retail switch. The CME was perhaps early (or prescient) on this, launching their Micro version of the e-Minis 20 years after the first and now one year later launching the e-mini Micro options.

CME Group…announced the launch of options on its Micro E-mini S&P 500 and Micro E-mini Nasdaq-100 futures contracts, which became available for trading today.

So, what do you want, Mr. and Mrs. retail trader?  Spend $50 on some fractional shares of Tesla, $25 on some out of the money Micro e-mini Puts or own all the high fliers in one $5 increment Faang+ futures contract. It’s never been so easy to make/lose all your money.