Was Friday the end for the trend following rally?

No sooner had the digital ink dried on our Trendsgiving post last week talking about the rally in trend-following managed futures programs – then the market gods smacked that asset class right back into place:

While economists argue over whether it is “transitory” inflation, many commodity markets are busy pushing 30% to 130% higher on the year, in rather classic up trends. It won’t always be like this but the trend strategy will enjoy it while it does.

And…. Some of the largest managed futures mutual funds on Friday

That’s single-day losses of between -3.5% and -6.5%, when the stock market was also down on the day, all thanks to some news out of South Africa about the Omicron variant. We had hoped the variants would keep being named after airlines (Eastern could have been next, then Frontier…but we digress)

What happened. Nothing out of the ordinary, really. It’s just that it all happened on the same day. The inflationary trends and ‘risk on’ markets took a pause, sending everything from Crude Oil (-13%) to Cocoa (-5%) lower.

As these markets have been trending up, this resulted in one-day losses for most trend followers. 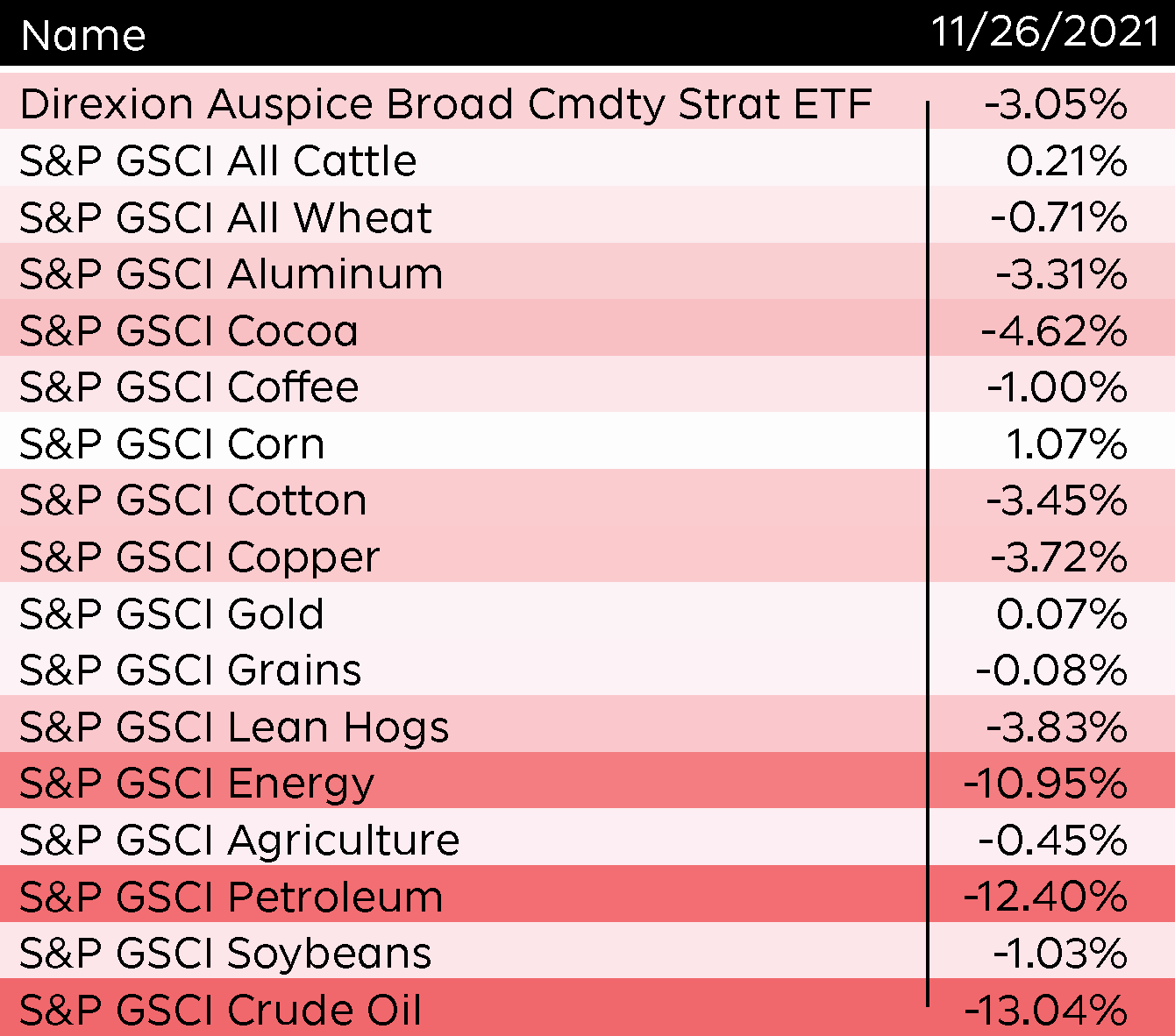 But, it wasn’t all a commodity story. Stocks were down on the day too. And that’s where people get confused about non-correlation being the same thing as negative correlation, something we’ve covered time and again on this blog.

It’s only normal for the uptrend in something like Crude Oil to reverse course while an uptrend in stocks does so, especially when and if caused by a shock like a new pandemic threat to the global economy. What makes managed futures non-correlated is that they won’t hold on to that trade. If Oil keeps going down at the same time as stocks, it will eventually go short and take on a negative correlation to the stock market. But at the top, when risk is on nearly everywhere, the trend following portfolio will see some relatively high correlation.

And that’s especially true when and if your trend following portfolio is rather heavy in the financials (stocks, bonds, currencies), which by their very nature are more closely tied to stock markets than say… Lean Hogs.

Which brings us to the former largest player in the managed futures mutual fund space – AQR. We can’t help but notice that AQMIX was one of the funds pointed out on Twitter. But while the others Black Friday losses still left them up double digits on the year, AQR’s managed futures product ended up down slightly. What gives? Likely a bit more financial exposure. Here are our former thoughts on what’s happening with the AQR Managed Futures Strategy Fund:

Is the new golden era of trend following gone? As quickly as it appeared? Something tells us this sort of commodity volatility is just the beginning.