No Winton, No Index?

After using the SocGen (formerly Newedge) CTA Index to compare managers against “the field” in some of our recent research, we went to do our usual peek at which managers comprise the index? And surprise, surprise, the largest managed futures manager in the space (Winton Capital) was no longer included in the index. What^%$# When, why, how did that happen? Can you have a managed futures index without managed futures stalwart Winton?  We had to investigate.

Money is the Name of the Game

First a little background. The SocGen index is ostensibly an index of the 20 biggest managers in terms of assets. Given that the Top 26 managers control 82% of the AUM in the Managed Futures space, that makes a lot of sense. But it’s not that simple. You see, there’s rules to indices, and this one requires that those managers also must report daily data and be open to new investments.

And with those simple rules, the Top 20 Manager criteria seems to shift in and out quite often. After doing a little digging, we found that it’s quite difficult to remain in the index based on that criteria. Turns out, only eight CTA’s have remained in the index continuously since 2014. That’s 60% turnover for those counting at home. 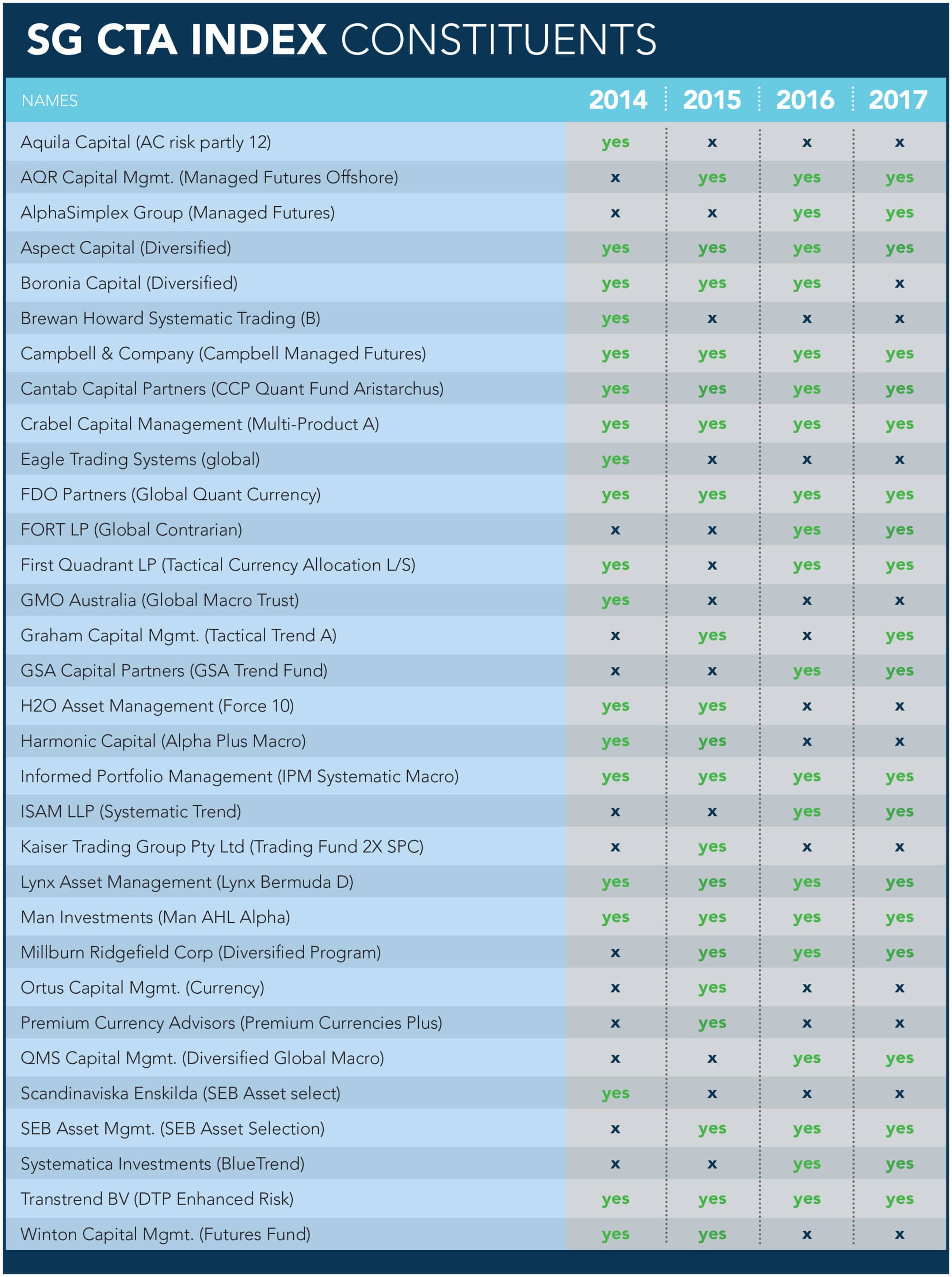 What Happened to Winton?

Winton Capital holds the largest AUM in the space, but they were taken out of the index in 2015. What gives, SocGen? After reaching out to Thomas Wrobel at SocGen, he responded that no manager is taken out of the index unless they no longer abide by the three rules. Turns out, Winton stopped reporting daily data. Sure, they’re still the biggest in the space, and yes – they’re open to new investments, but if they don’t provide daily data – it’s a no go as far as SocGen is concerned.

Let’s forget for a second Winton Capital David Harding went on the record cursing about not wanting to be considered a CTA. Maybe they stopped reporting because they don’t want to be grouped in with other CTAs, or maybe they don’t want to go through the hassle. We’ve interviewed Harding before, but it’s time for round 2.

But this creates a deeper issue. If an index doesn’t include the biggest player in the space, is it truly representative of the Managed Futures space?

What is the true definition of a CTA (Commodity Trading Advisor)?

This is the never ending sticky question in which everyone seems to have their own answer. We first wondered if SocGen’s classification of a CTA had anything to do with including or excluding managers from the database and if in fact that was the reason for the turnover. Turns out, not so much. Thomas Wrobel outlined for us what they see the SocGen CTA Index as:

The SG CTA Index construction methodology can be considered a starting point for an institutional investor (either adding a CTA, or approaching CTA allocation for the first time).

But that still doesn’t provide any color on why managers are taken away and added. We asked why currency managers H2O, Ortus, and Premium Currency is no longer in the index. Thomas Wrobel had this to say:

As you note there has been constituent turnover, but this is not an active decision to exclude certain strategies: H2O – Force 10 was a futures only Macro strategy, that closed to new investment so was no longer eligible. Ortus & Premium Currency advisers were no longer in the top 20 AUM criteria (due to either increasing industry assets, or declining strategy assets).

Thomas provided for us their 2015 report which outlines what exactly they classify as a CTA, which is shown below.

The entire managed futures space is made up of all the possible permutations of this framework, which can therefore also include Global Macro. This means Discretionary Macro could easily be categorized as a CTA within this framework, however we typically classify this strategy separately from managed futures and therefore we exclude it. We do, however, include other discretionary based strategies.

An example of how this framework might be used would be to take trend following, which is typically characterized as utilizing technical, price-based data; in a systematic fashion; over medium- to long-term time horizons; trading a diversified portfolio of assets; to capture directional market trends. However, trend following represents just one possible way of combining these elements. 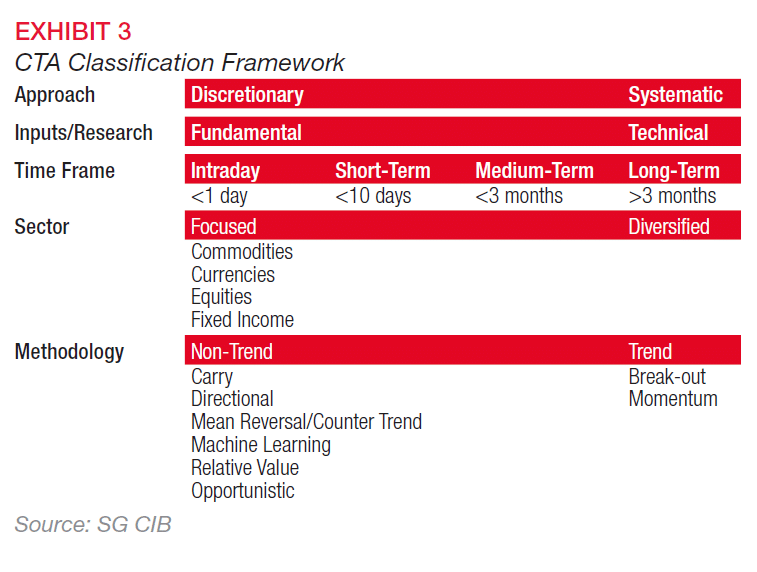 Trend Following vs The Rest of Managed Futures

So, all shapes are accepted, but is one strategy type outweighing the the others? When talking about this space, trend following ends up being synonymous with Managed Futures, but with a quick look  at the table above, you’ll see but one dimension of a CTA.

So are Trend Following Strategies dominating the SocGen Index? Trending Following remains the dominant strategy, but it is not the overwhelming number of strategies in the index. If we take a look at the SocGen’s 2015 report, we can see that more and more money has been flooding into trending following strategies than ever before. Here’s a strategy breakdown by assets. 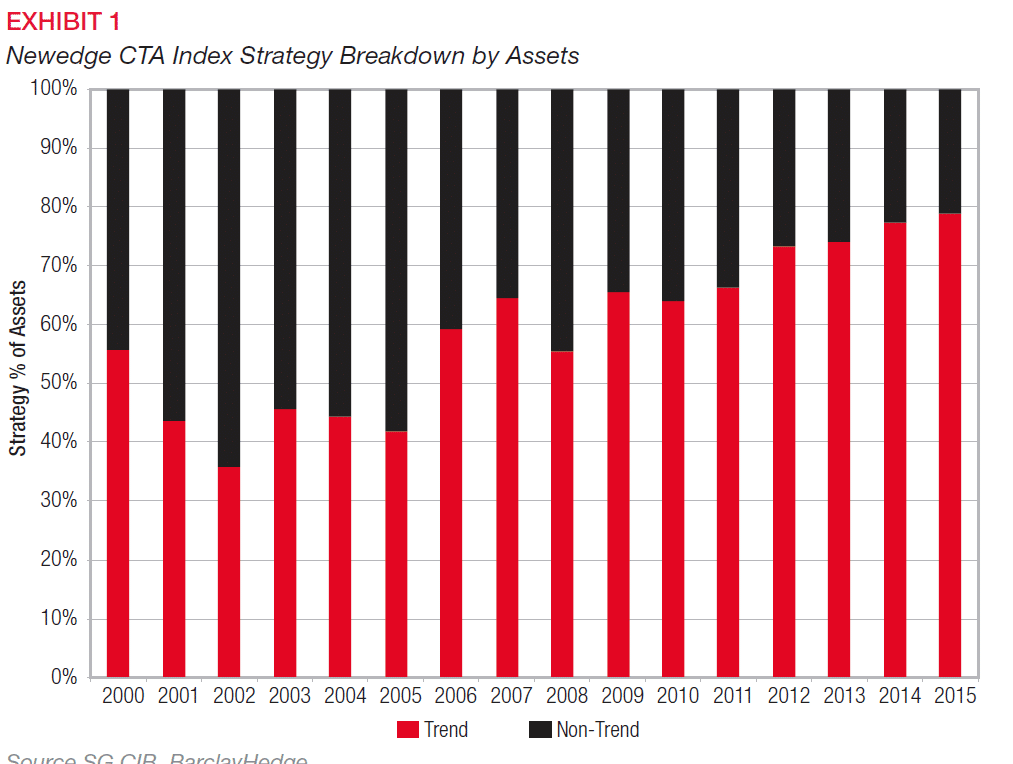 Since 2002, the Trend Following AUM has gone from 35% to almost 80%! But if we look at the Breakdown by number of programs in the index, Trending Following still remains just about at the 50% mark over the last 15 years. 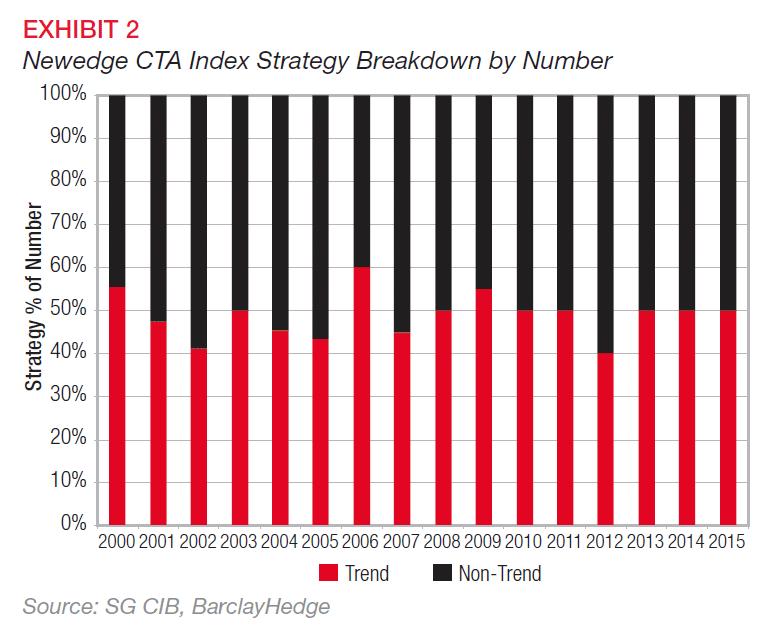 It’s interesting to see that throughout a period where traditional systematic trend following managers struggled to perform (’10-’13) they still had enough AUM to represent 50% of the index and continue to grow in assets within the index. Just goes to show you articles might claim trend following is dead, but investors sure don’t think so.

The larger question here, is will the top 20 managers by AUM (who are open to new investment and who want to be included in the index) be truly representative of the industry? Can you truly have an index if some of the most benchmarky names out there don’t want to be included? In the end, can you have a managed futures index without Winton?  Maybe the Barclayhedge index, which includes over 500 programs in more representative.

Or maybe this is all a moot point anyway, with the real benchmark these days seeming to be AQR, which is becoming the low cost managed futures beta play for many. Of course, AQR’s having its own issues.

In the end, you don’t invest in an index, you invest in a program, so relying too much on portfolio modeling based on an index alone can be problematic. But the contrarian in us likes the fact that Winton is perhaps trying to distance themselves even further from the managed futures moniker, possibly marking a managed futures buying point.