The Dying Power of PetroCurrencies

A couple weeks ago, we wrote about the crude oil market making a classic momentum/trend following type brake out. It’s reversed a bit since and then rallied some, proving that trying to nail down what makes “liquid gold” move is as difficult as always.  The Rules of the Crude Oil Market Have Changed to be sure: the U.S. is no longer only a major importer of the commodity, but becoming a major exporter of the oil. But it’s not just the U.S., it’s China, it’s the middle east, and it’s being reflected more and more in the declining relevance of petrocurrencies.

What are PetroCurrencies?  We’re talking the currencies of not just oil-producing nations like the US, but nations which have a large portion of their GDP linked with Oil – Think Russia, Canada, and Norway. Historically, these currencies have been highly correlated to crude oil. But as Bloomberg shows, this correlation is on the decline:

The Canadian dollar has weakened, the Norwegian krone is little changed and the Russian ruble has strengthened just 4 percent in the past three months even as the price of Brent crude has surged 17 percent and West Texas oil 11 percent. In commodity-rich Latin America, the 90-day correlation between currencies and oil turned negative last month for the first time since 2014. 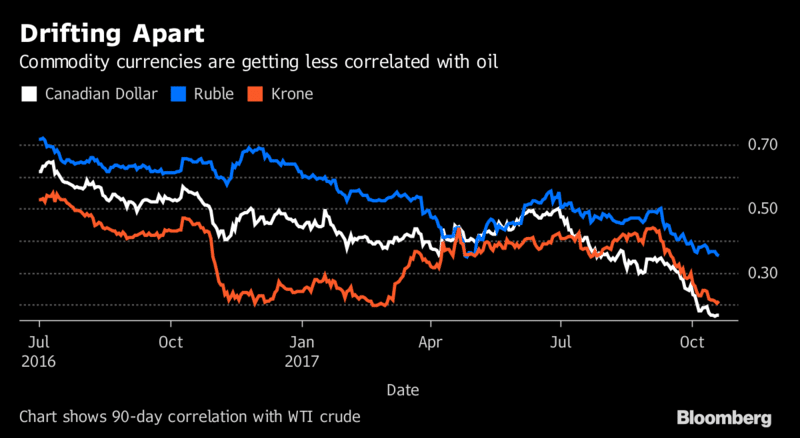 The US Dollar relationship is a curious one, as we in the US have a lot more going on tied with our currency (like Amazon and Wall Street and Starbucks and the rest) than just oil.  But with Oil priced in US Dollars, there is a relationship there… which is typically slightly negatively correlated. Although, during the crude oil plunge a couple years ago, we looked at the correlation of crude oil and the U.S. Dollar and it didn’t look to have any consistent correlation one way of the other. 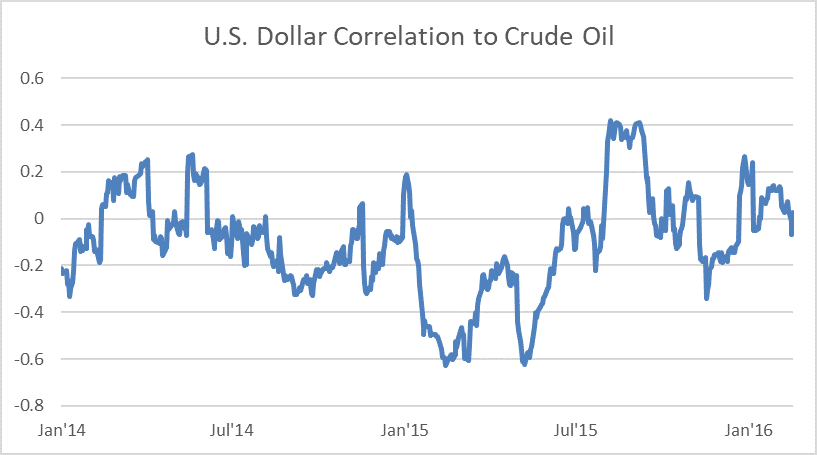 Bloomberg fills in the correlation of the remaining time: 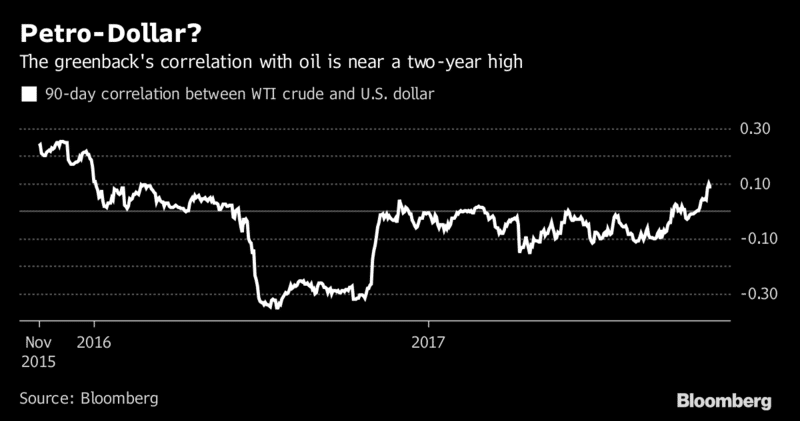 While the correlation between the greenback and crude oil is increasing, the U.S. dollar’s role in the pricing of Crude Oil is quite a fascinating story. John Curran wrote about it in Barron’s:

In the summer of 1974, Treasury Secretary William Simon traveled to Saudi Arabia and secretly struck a momentous deal with the kingdom. The U.S. agreed to purchase oil from Saudi Arabia, provide weapons, and in essence guarantee the preservation of Saudi oil wells, the monarchy, and the sovereignty of the kingdom. In return, the kingdom agreed to invest the dollar proceeds of its oil sales in U.S. Treasuries, basically financing America’s future federal expenditures.

Soon, other members of the Organization of Petroleum Exporting Countries followed suit, and the U.S. dollar became the standard by which oil was to be traded internationally. For Saudi Arabia, the deal made perfect sense, not only by protecting the regime but also by providing a safe, liquid market in which to invest its enormous oil-sale proceeds, known as petrodollars. The U.S. benefited, as well, by neutralizing oil as an economic weapon. The agreement enabled the U.S. to print dollars with little adverse effect on interest rates, thereby facilitating consistent U.S. economic growth over the subsequent decades.

An important consequence was that oil-importing nations would be required to hold large amounts of U.S. dollars in reserve in order to purchase oil, underpinning dollar demand. This essentially guaranteed a strong dollar and low U.S. interest rates for a generation. Given this backdrop, one can better understand many subsequent U.S. foreign-policy moves involving the Middle East and other oil-producing regions.

Since the 1970’s, this has pretty much been the standard; countries store cash in dollars when they need to buy and mostly sell crude oil. But Curran says these fundamentals might be changing (much to the benefit of macro traders – more on that later).  What’s changed? Technology (doesn’t it always?) leading to lower demand, and China.

The growth of U.S. oil production due to new technologies such as hydraulic fracturing and horizontal drilling has both reduced the U.S. need for foreign sources of oil and led to lower global oil prices. With the U.S. economy more self-reliant for its oil consumption, reduced purchases of foreign oil have led to a drop in the revenues of oil-producing nations and by extension, lower international demand for Treasuries and U.S. dollars.

Next, China and Russia:

China has agreed with Russia to purchase Russian oil and natural gas in yuan.

As an example of China’s newfound power to influence oil exporters, China has persuaded Angola (the world’s second-largest oil exporter to China) to accept the yuan as legal tender, evidence of efforts made by Beijing to speed up internationalization of the yuan. The incredible growth rates of the Chinese economy and its thirst for oil have endowed it with tremendous negotiating strength that has led, and will lead, other countries to cater to China’s needs at the expense of their historical client, the U.S.

China is set to launch an oil exchange by the end of the year that is to be settled in yuan. Note that in conjunction with the existing Shanghai Gold Exchange, also denominated in yuan, any country will now be able to trade and hedge oil, circumventing U.S. dollar transactions, with the flexibility to take payment in yuan or gold, or exchange gold into any global currency.

As China further forges relationships through its One Belt, One Road initiative, it will surely pull other exporters into its orbit to secure a reliable flow of supplies from multiple sources, while pressuring the terms of the trade to exclude the U.S. dollar.

The world’s second-largest oil exporter, Russia, is currently under sanctions imposed by the U.S. and European Union, and has made clear moves toward circumventing the dollar in oil and international trade. In addition to agreeing to sell oil and natural gas to China in exchange for yuan, Russia recently announced that all financial transactions conducted in Russian seaports will now be made in rubles, replacing dollars, according to Russian state news outlet RT. Clearly, there is a concerted effort from the East to reset the economic world order.

The implications here are interesting. Will this cause a fundamental shift in crude prices? Maybe, but what it could do to the US Dollar (which many other commodities are priced in as well) seems to be the more interesting part. Will it cause more volatility in the US Dollar, lead to bigger swings in interest rates without the foreign demand for reserves?  Cause other PetroCurrencies to take on some of the characteristics of the mighty US Dollar. Will any of it matter given Bitcoin’s rise? Stay Tuned.