We talked a few weeks ago about ‘Why There’s Trillions in Hedge Funds with Stocks at All Time Highs’, and read with interest Barry Ritholtz’s Bloomberg piece lamenting “missing hedge fund performance”. We tweeted out our thoughts:

Is that true?  Is hedge fund “missing performance” more a function of volatilty than lack of opportunity. Put another way, are hedge funds:

1. Trying to keep up with their past success, but because of a host of factors unable to deliver those types of returns any longer

2. Not even trying to get those past high performance numbers any longer

First, let’s look at the stats from Bloomberg showing the big divergence in relative performance between hedge funds and the stock market pre and post crisis: 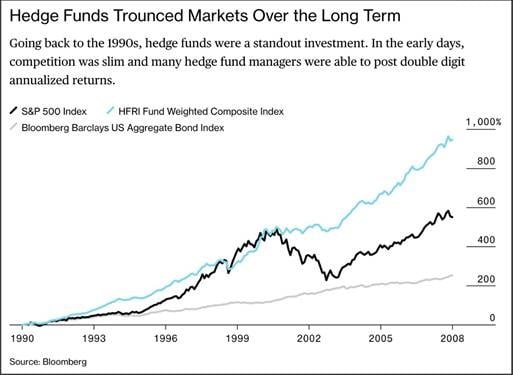 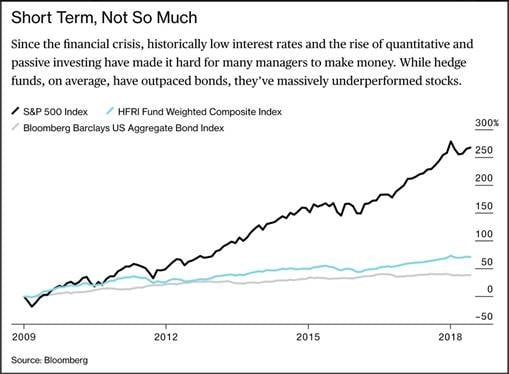 If it is the first choice above of hedge funds trying to outperform the market but unable to, Bloomberg and Ritholtz come up with a few possible reasons why they are unable to do that: https://ritholtz.com/2018/09/mystery-of-missing-hedge-fund-performance/

2. Size is an issue: When it comes to performance, bigger may not be better… post-crisis, a few star funds that had capitalized on the downturn grew tremendously, then ran into the wall.

4. Groupthink: …groupthink in the era of social media has even infected fund management.

5. Recency effect/bad timing: Mean reversion may have been a huge factor.

6. The Great Reset:  The effect of that huge sell-off was a full reset — a reboot and brand new game.

There’s surely some problems across each of these areas, but probably none as big as the plain fact that the stock market has a near unbelievable run higher. So unbeliveable, that the rally itself was the black swan hedge funds were supposed to be protecting against.  The rally was the opposite of a black swan (a white moose) as we pointed out here:

Turns out, fictional 2010 Ben Carlson was exactly right – the biggest black swan over the next 7 years was the absence of any Black Swans.  The biggest risk was the risk of missing out. What we’ll now call, with an assist from @RudyHavenstein, the White Moose.

But even with most hedge funds missing the White Moose, we’re still not so sure that they were trying to capture it at all.  From our standpoint, it looks more like a Great Reset, to borrow Barry’s term. BUT, not a Great Reset of market conditions that led to “what stopped before just stopped working”. Instead, it was a Great Reset of investor risk appetite. Hedge fund investors give mandates to fund’s on the expected volatility and drawdown levels they will tolerate, and the financial crisis severely shocked investors into reassessing just how much risk they were willing to take on across all of their investments. Here was a summary we typed up after a hedge fund conference back at the beginning of 2017.

Hedge funds are about delivering an expected risk. That’s something a passive investment in the stock market can’t do. We can’t ask the S&P to just give us a 10 vol next year. Which is all a very long winded way of asking what the risk profile of hedge funds has looked like pre and post crisis. All the hedge fund supporters, including us, trot out the ‘risk adjusted’ argument when Ritholtz and co. attack hedge funds for underperforming the stock market. But if the returns are down – has the risk come down as well. Has it come down more, resulting in  higher risk adjusted performance?  Here we can see that while returns have surely been on the decline when looking at the rolling 36 month average annualized return of the Credit Suisse Hedge Fund Index, but that the risk has come way down as well, as represented by the rolling 36 month standard deviation of returns. 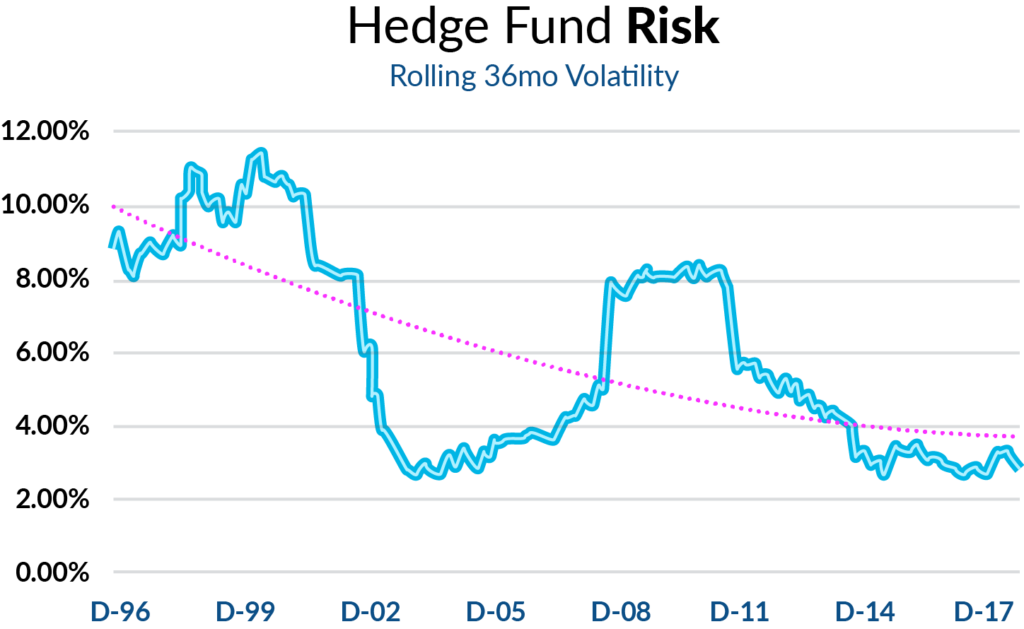 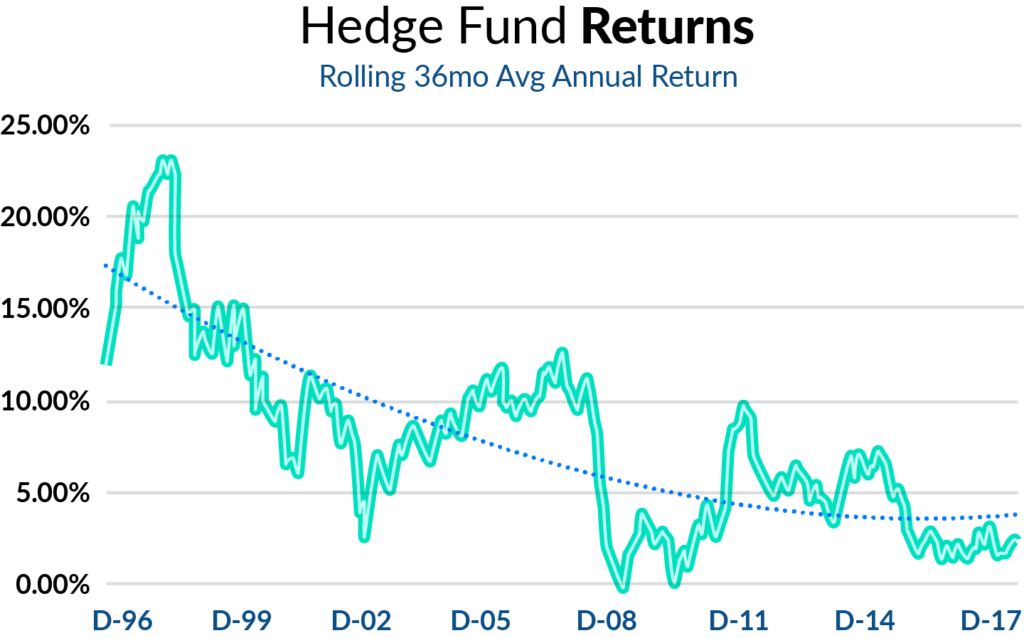 Putting this all side by side and comparing the Credit Suisse Hedge Fund Index from the 1993 through 2008 period with the 2009 through 2018 period – we can see a defined shift in volatility, where hedge funds have shed roughly half their vol, but only a bit more than a third of their return, meaning that a simplistic risk adjusted ratio (the Sharpe with a rfr=0%) has actually increased over the period, about a quarter better. 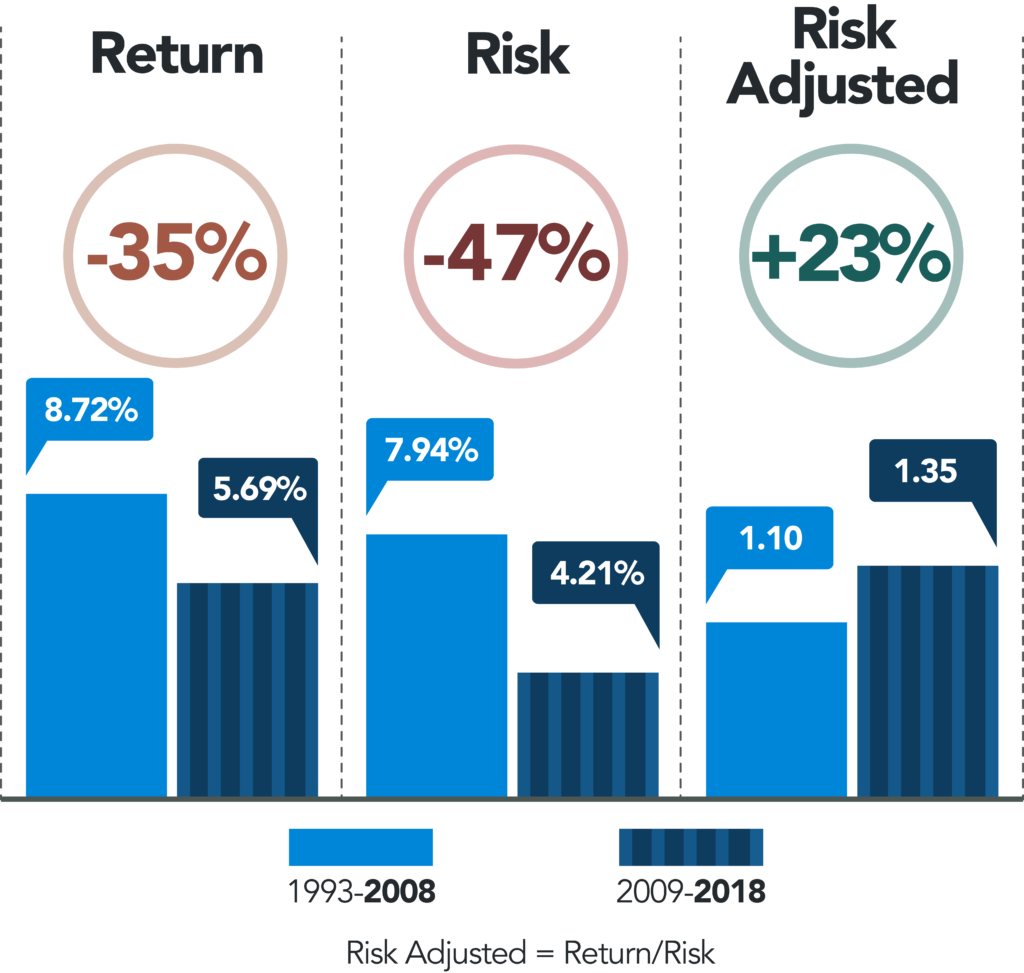 So, sure, there’s a lot of hedge funds out there which aren’t all that great. There’s big ones less interested in hitting home runs than just earning fees with easy singles. There’s a mutli-decade reversion to the mean. There’s a ton of reasons why hedge funds have underperformed the stock market on a relative basis. But perhaps the biggest reason of all is because that’s what the trillions of dollars in pension, family office, and endowment money wants them to do. As some family office executive once said: we’re in the business of staying rich, not getting rich. The Great Reset was more about these large investors realizing just that. They don’t need hedge funds to make them rich (the stock market, real estate, and wealth inequality do that just fine). They need hedge funds to stay rich….  Hedge fund managers are only too happy to oblige.