Is the CTA Sky Falling (Again)?

Managed futures is back in the headlines again, this time for its volatile performance to start off 2018 with Bloomberg going with the sensationalized headline “Trend-Chasing Quants Post Worst Returns in 17 Years.” It was the worst monthly return since November 2001 and the article had merit. For instance, it addresses some CTAs that went performance chasing in the equity sector after struggling for returns during the epic bull run which started nine years ago almost to the day. We warned about this in our 2018 Managed Futures Outlook, and will get to that in a second. But, we first want to talk performance. Is it really the “worst” return in 17 years? Also, is the industry now called “Trend-Chasing Quants?”

Before we go any further, we want to point out a BIG caveat that using the SG CTA Index as a gauge for Managed Futures performance isn’t truly representative of the asset class. Using the SG CTA Index, is a little like only using FANG+ stocks as a gauge for all equity markets. That said, it’s the best gauge we have to show how the biggest players in the CTA space are doing.

We pulled the data from the SocGen CTA Index going back to 2000, and it turns out, Managed Futures is having its worst start to the calendar year, following close behind 2002 (when the index returned 13% for the year, for what it’s worth). But it’s worth noting that start to the year is still just a loss of less than 3% (or an hour or so in NFLX price movement).  It’s also telling of the asset class that 3 of the 10 worst starts of the year for the index have actually been in the positive category.

Now, Bloomberg was likely talking about just February, not Jan+Feb, and as far as months go, February was bad at down over -6%, there’s no sugar coating that. 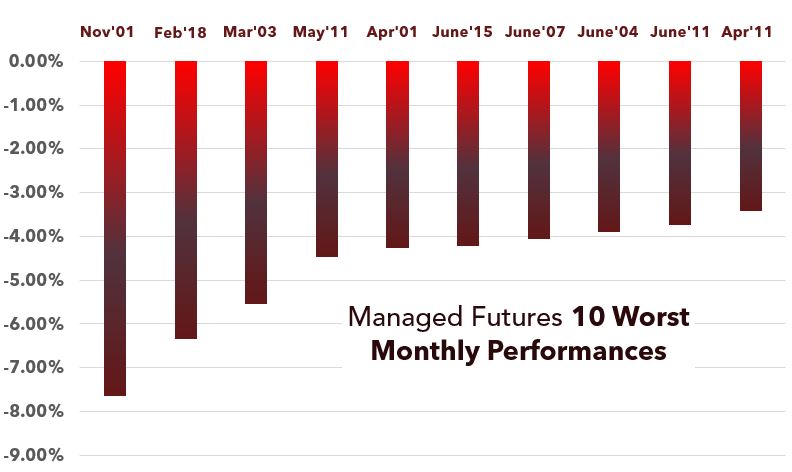 Here’s the index’s worst two consecutive month stats, where Jan+Feb doesn’t even sniff the top 10 board, but also showing essentially that the index will need to post a rather good positive number in the 3% range to avoid Feb+Mar taking up residence on this chart.

The more nuanced rub here isn’t the losses, it’s that they happened during a month when everything else lost money.  You know, that famous part  about managed futures being non-correlated and a crisis period investment. Well, that didn’t show up during early February’s volatility spike, although it could be easily be argued that a few days sell off is anything but a “crisis period.” 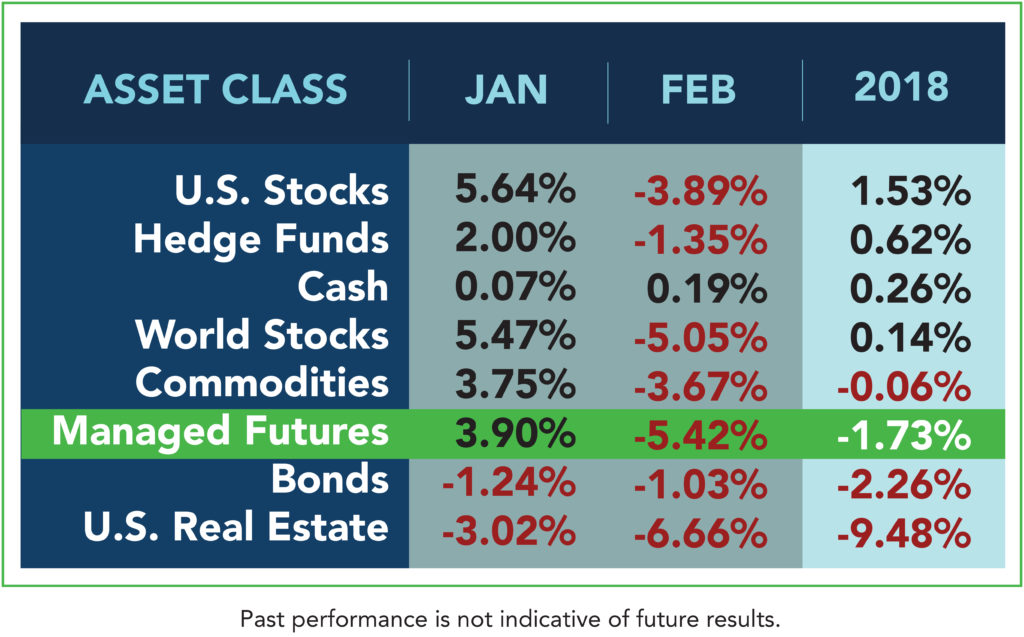 The Billion Dollar question now facing investors in managed futures funds is whether this is a new normal. That’s the idea implied in the Bloomberg piece, and something we even said in our 2018 Outlook:

PS – beware the managed futures programs who have ‘cheated’ a little over the past few years to get additional return by adding short vol exposure to their models. They’ve been smarter than their peers for doing so the past few years, but may underperform should we see a more normal vol pattern.

So is this a real problem? Are CTAs forever skewed towards short volatility strategies, negative skew, and positive S&P correlation?  There’s no denying the huge correlation at the end of January and early February, where the rolling 12 month correlation between the SG CTA Index and the S&P 500 spiked to its highest levels in 4 years, but upon closer examination – the correlation is anything but stable in one region or another. It has oscillated steadily between +0.8 and -0.8 for much of the past two decades, with correlations rising when equity markets are rising, and turning negative when equity markets are selling off.  This is why non-correlation does not equal negative correlation, which we’ve covered ad nauseum here, here, here. 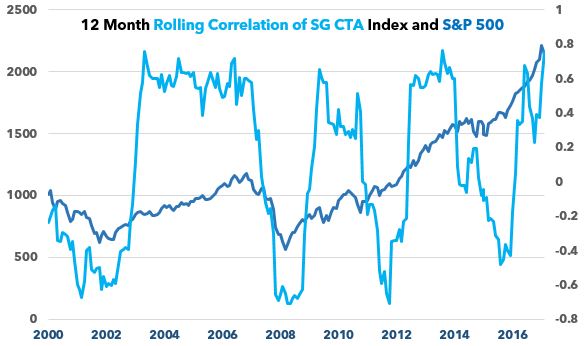 The short answer is no. There’s not a sinister plot to turn CTAs non correlation into a stock market clone. This spike in correlation is just as likely due to the incredible stability and longevity of the uptrend in equity markets (that’s mostly the job of managed futures, after all, to capture those big tends) as it is a concerted effort to skew portfolios to long equity positions. The dynamic nature of the programs automatically skews the portfolio to long equities in an uptrend for stocks. That’s how it works.

The more involved answer is maybe/it bears watching/can you blame them.  The hedge fund world is a performance business, and as cut throat as it gets. If you don’t perform, you’re out. And it has been about as hard as it gets for a normal, long volatility type multi-market systematic macro program to perform in the historically low volatility environment of the past 9 years. The smart people behind those problems aren’t blind. They see what’s working. They have to answer the question on why they can’t beat the S&P, and so forth. They have research teams, they can run backtests to see what happens when adding some short vol (it usually lowers risk and improves performance in testing).  So, it’s right there for the taking.

But, there’s a philosophical question in here of what a managed futures manager should be focusing on. Is their job to get the best risk adjusted returns for the client, ignoring correlations and skew and the rest?  Or is their job to get the best returns within a defined asset class bucket (long vol, positive skew)?  That’s a tough one to answer.  You would think an investor would say they want the best risk adjusted return, no matter how it is (legally) derived. But more and more investors appear to prefer being able to rely on a distinct set of parameters and factors from their investment. They want to know how it will do given x, y, and z – not just that it will do something.  Which brings us back to the problem presented by the extended low volatility environment.  If the choices are:

What do you think most managers will choose from a business standpoint? You can only hold your virtue so long in the performance driven allocation world we live in. Which begs the question – what happens when everyone is invested in the same thing because it’s been working? We’re not sure, but we think it looks a lot like early February’s massive Vol spike and equity sell off.